Confusion over U.S. role after deadline 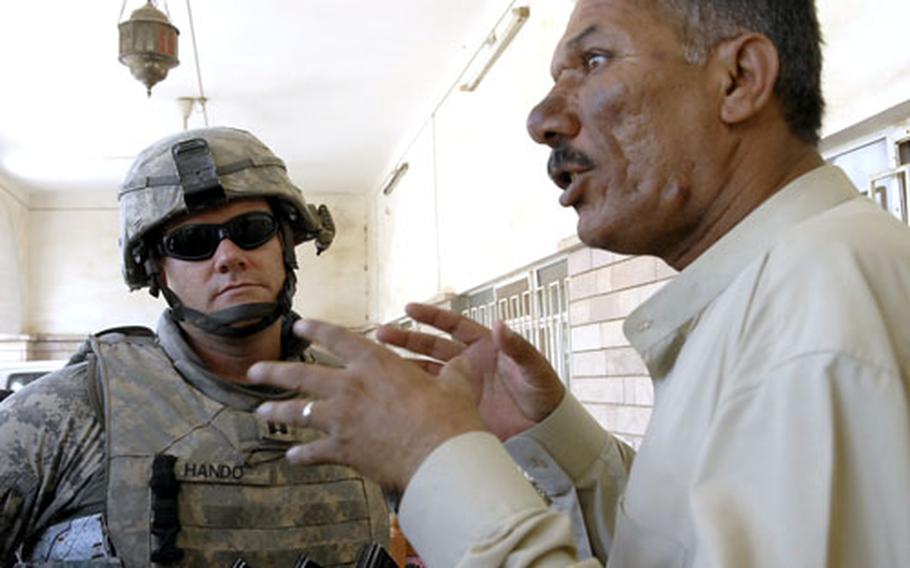 U.S. Army Capt. Tom Hondo listens to Sheik Abdul Mahsin Sa&#39;adoon, a tribal leader in a Diyala province village. Like many Iraqis, Sa&#39;adoon is concerned the recent U.S. pullback from Iraqi cities could lead to an increase in violence. (Heath Druzin / S&S)

U.S. Army Capt. Tom Hondo listens to Sheik Abdul Mahsin Sa&#39;adoon, a tribal leader in a Diyala province village. Like many Iraqis, Sa&#39;adoon is concerned the recent U.S. pullback from Iraqi cities could lead to an increase in violence. (Heath Druzin / S&S) 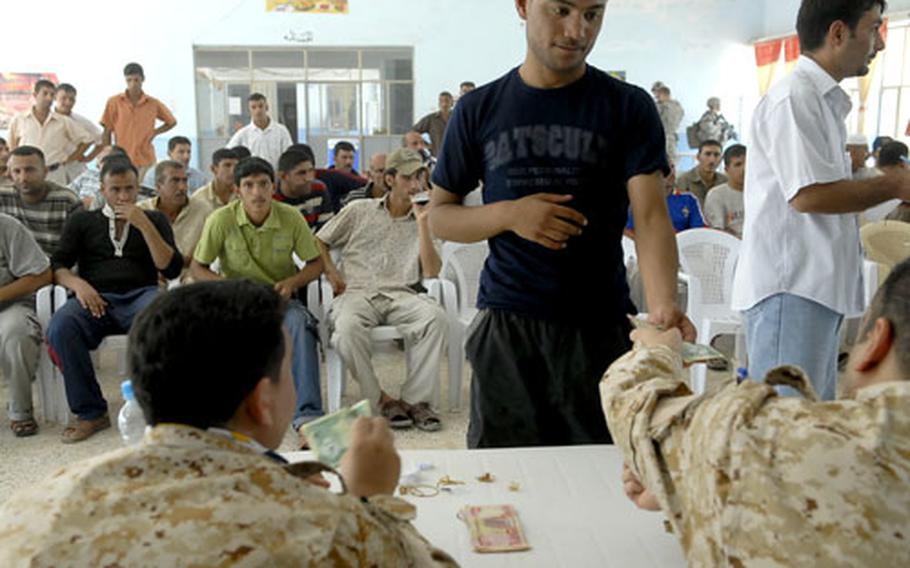 Iraqi soldiers pay a "Sons of Iraq" member in Diyala province. Some guards have gone unpaid since the U.S. turned the program over to the Iraqi government. Many leaders in the group are worried the recent U.S. pullback from Iraqi cities could mean more tension between them and Iraqi security forces. (Heath Druzin / S&S)

MUQDADIYAH, Iraq &#8212; Capt. Chris Hassan didn&#8217;t get far in one of his first patrols in this Diyala province city after the June 30 deadline. In fact, he was turned back before he even got started.

"The message comes from the Ministry of Defense &#8212; that we&#8217;re not allowed to have combined operations with coalition forces," Iraqi army 1st Lt. Hussein Muhammed Ali told Hassan. "We would like to keep working together, but it&#8217;s military orders."

There has been a lot of confusion since June 30, when U.S. troops had to be largely out of Iraqi cities. Many Iraqis, including some soldiers and police, think American troops are ceasing operations completely. They worry that Iraqi security forces are not up to the challenge. Complicating matters are the puffed-chest celebrations across Iraq marking June 30 as a great victory, even a rejection of occupation. Local Iraqi commanders are reluctant to continue working with Americans for fear of looking weak.

Across Diyala province, a crucial battleground in the past, U.S. patrols such as Hassan&#8217;s have been turned away by Iraqi security forces, leading Iraqi and U.S. commanders to discuss the post-June 30 rules, according to U.S. military officials.

The province has been quiet since the deadline, but Iraqi security forces around the second biggest city, Muqdadiyah, are off to a rocky start. Iraqi police stormed a wedding last Thursday in the village of Abu Sayda to serve two arrest warrants and ended up killing four guests in a shootout. The incident enraged local leaders and prompted the deputy governor of Diyala to release a scathing official statement denouncing the Iraqi police.

It added fuel to deep mistrust of the Shiite-dominated Iraqi ranks in the Sunni-majority area.

In the wake of the shootings, Muhammed Majid Hassan, an Abu Sayda political leader, had a dim view of the Iraqi security forces&#8217; ability to take the lead on securing Iraq.

For their part, U.S. forces have been keeping a low profile. The basketball court has been a little busier, seats in the dining hall a little harder to come by the past few days at Forward Operating Base Normandy, on the edge of Muqdadiyah.

Soldiers who in the past patrolled the former insurgent stronghold are being kept on base as part of a province-wide strategy aimed at showing that Iraqi security forces are in control. U.S. commanders in the province are largely keeping their soldiers confined to base for this first critical period after the deadline.

U.S. commanders, concerned that insurgents may step up attacks against Iraqi forces in the coming days, have put out a unified message of confidence in their Iraqi counterparts.

Problems remain across Iraq, though. A bombing in the oil-rich northern city of Kirkuk killed dozens of people on June 30, marring celebrations of the U.S. withdrawal, and four U.S. soldiers were killed in Baghdad the day before. In Muqdadiyah, as in many Iraqi cities, local police lag behind the Iraqi army and national police and remain infiltrated by militants.

Since the U.S. relinquished control of the &#8220;Sons of Iraq,&#8221; largely made up of former Sunni militants who turned against the insurgency, there have been problems paying the members, causing tension with the Shiite-dominated central government.

There&#8217;s still a lot of convincing to do among ordinary Iraqis, too. Many Iraqis think Americans are leaving completely, as opposed to reducing their presence in cities, while others still see America as the main power broker and don&#8217;t believe the June 30 deadline changed that. It&#8217;s a lot to juggle for commanders like DeMoss.

Increasingly, it&#8217;s up to Iraqis themselves to do the convincing, as Hassan, the U.S. Army captain, found out when his patrol was spiked.