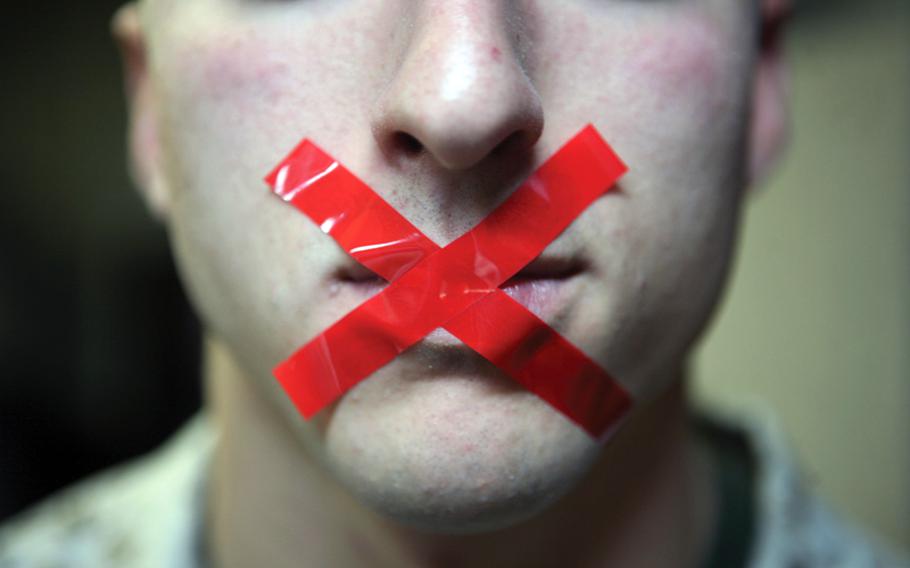 In 2010, 2,617 service members reported being a victim of sexual assault, according to the Department of Defense Annual Report on Sexual Assault in the Military. (III Marine Expeditionary Force P)

HEIDELBERG, Germany &ndash; Do civilians within U.S. Army Europe who are sexually assaulted have the same options for reporting as soldiers do?

In February, for the second time in less than a year, an exception to the Defense Department policy directing how sexual assault reports are handled &ndash; that allowed civilians confidentiality &ndash; has expired.

Since March 1, civilian women have been allowed to make only &ldquo;unrestricted&rdquo; reports that become known to law enforcement, garrison commanders, supervisors and suspects&rsquo; commanders.

&ldquo;Since the USAREUR restricted reporting pilot program has ended, adult civilian victims of sexual assault will be referred to law enforcement officials,&rdquo; said a USAREUR spokesman in an email.

Soldiers have been able to make restricted reports since 2005, after Congress ordered the DOD to make extensive changes in dealing with sexual assault, including keeping records, training law enforcement and prosecutors, hiring victim advocates and devising prevention strategies.

The civilian pilot program was started in March 2010, after then-USAREUR commander Gen. Carter Ham requested an exception to DOD policy in an effort to provide confidential help to civilian victims, who might not otherwise report their assaults.

Ham pointed out that civilian women in the U.S. had options to seek medical care and support without involving military or civilian law enforcement or the judicial process.

But in Europe, he said, even if initial medical treatment may be received at host-nation facilities, &ldquo;follow-on services must be obtained through the military health care system, even if only for referrals to host nation assets.&rdquo;

USAREUR, on Jan. 11 of this year, requested approval from the Department of the Army for a permanent exception to continue the program. That was more than a month before the program&rsquo;s end date.

The Army sent the request to DOD on May 24, according to an Army spokesman, four months later.

Neither the Department of the Army nor DOD responded to emails asking what the hold-up was, and whether such policy inconsistencies could have a deleterious effect on sexual assault reporting.

But the changing policy has caused confusion. A U.S. Army Garrison Livorno Army Community Service online newsletter in June, for instance, said that restricted reporting for civilians had been extended for another year. The publication had the same information in January and April.

And a caller to Military One Source, a DOD service offering support and counseling on a range of issues, asking if USAREUR still offered restricted civilian reporting was told that it did.

It&rsquo;s not the first time the policy status has been in flux.

Last September, when the program first expired, USAREUR said it was waiting for Army approval. But Kaye Whitley, head of the Sexual Assault Prevention and Response Office at the DOD said the program had already been authorized for a year, and there was no need to interrupt it.

In any event, within days of media reports that the program had lapsed, the Army approved USAREUR&rsquo;s request, and extended the program until the end of February.

Then it ended again.

The exception has been run as a pilot program to assess what sort of resources were required to expand the program, such as hiring counselors and providing training, DOD officials have said. Since the program began in 2010, four civilians have made confidential restricted reports, according to USAREUR. Project managers said last year they suspected more would make restricted reports, if they knew they had that option.

Civilian women, including family members and civilian employees, compose nearly a third of victims who report sexual assaults military-wide, according to DOD statistics. DOD believes that only a fraction of sexual assaults &ndash; perhaps 20 percent -- are reported. According to experts, women often don&rsquo;t report because they prefer not to have their assaults widely known and fear they&rsquo;ll be blamed instead of helped.

SAPRO officials have said they were working to allow restricted reporting for all civilians. They said last fall that the change in policy to allow it could begin as early as this past spring, but it has not yet been implemented.

The major issue complicating such a policy change has to do with the Department of Labor &ndash; &ldquo; which may impact a civilian, who elected restricted reporting and tried to get disability services later,&rdquo; according to a DOD spokeswoman.