Confronting the horrors of Iraq’s graves enw# 129p bs Alan Dooley/Courtesy to Stripes In an interview, Archaeologist Michael “Sonny” Trimble draws a diagram to show where he was in a courtroom, in relation to Saddam Hussein and "Chemical Ali." In the foreground tis a photo of him testifying. (Alan Dooley / Courtesy photo)

enw# 129p bs Alan Dooley/Courtesy to Stripes In an interview, Archaeologist Michael “Sonny” Trimble draws a diagram to show where he was in a courtroom, in relation to Saddam Hussein and "Chemical Ali." In the foreground tis a photo of him testifying. (Alan Dooley / Courtesy photo) The mass graves of Iraq were buried under several feet of dirt after the victims they contained were gunned down. To expedite work, a large excavator was employed to remove overburden. Michael “Sonny” Trimble walks closely to the giant bucket as the skilled operator removes fractions of an inch. When Trimble sees the first evidence of remains, the inch-by-inch archaeological methods will start. (David Hempenstal / Courtesy photo) 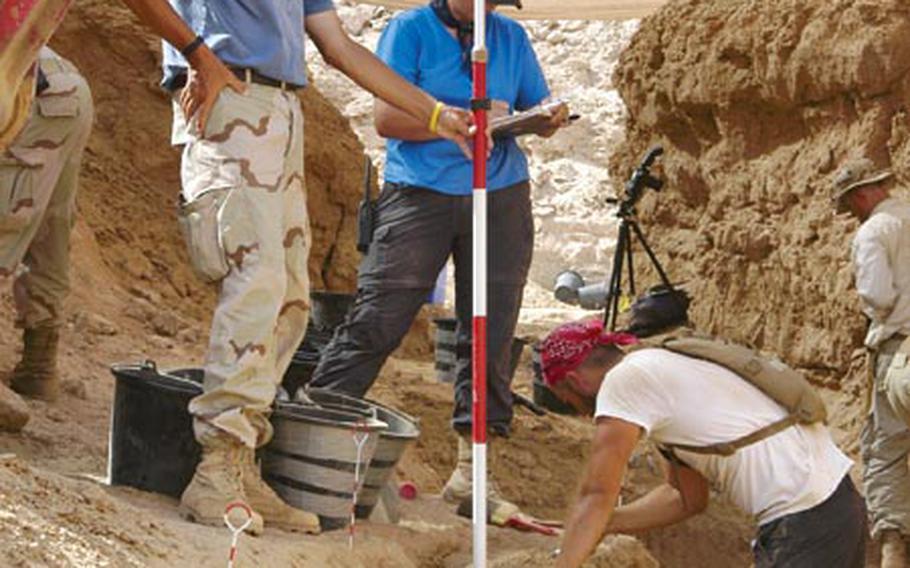 Forensic archaeologist Michael “Sonny” Trimble and the Army Corps of Engineers were in charge of uncovering the mass graves in Iraq and making a case against Saddam Hussein’s regime in the attempted extermination of the Kurds. Trimble, a veteran of such digs, had trouble entering the gruesome grave sites after seeing children’s remains. (David Hempenstal / Courtesy photo)

ARLINGTON, Va.- For the first 30 years that forensic archaeologist Michael "Sonny" Trimble worked among the dead, the bones he uncovered always stayed quiet in his mind.

Trimble&#8217;s employer, the Army Corps of Engineers, routinely sent him to places like Rwanda and Bosnia to help unearth the victims of genocide, or lend his expertise to U.S. law agencies to assist in homicide investigations.

But no matter how many victims were in those graves, or how distressing the condition of their remains, "nothing ever got to me," Trimble said.

Nothing, that is, until Iraq.

Trimble was there at the request of the U.S. Justice Department, leading an international team whose mission was to excavate mass graves from the 1988 Anfal Campaign, Saddam Hussein&#8217;s effort to exterminate the Kurds.

"It happened to me very early on," in late summer 2004 in Ninevah province, Trimble said. The team was excavating the first of what would later total nine mass grave sites.

Trimble began to walk down into the grave, when he saw, at the very bottom at the northern end, "a little kid, maybe 2 or 3 years old, that had fallen face-down."

The child had died holding a red and white ball.

"My daughter had a ball exactly like that," Trimble said. "I thought of her and how I used to play &#8230; I turned around and walked away. I almost started throwing up.

When the dizziness passed, he realized he could not make himself return to the grave.

But as project leader, Trimble had to get himself under control; he would need to enter the grave five or six times a day. He asked one of his directors to remove the child&#8217;s body from the grave.

Thousand of Kurdish villages in southern Iraq were razed and their inhabitants killed or deported during Anfal. The precise number of dead is unknown, but the "low-end estimate," Trimble said, is 120,000.

Saddam had ordered the "extermination" of the Kurds, but the commander who actually carried it out was his cousin, Ali Hassan al-Majid, or "Chemical Ali."

Trimble&#8217;s team was responsible for developing a legal case against the two, he said.

They were also going to help demonstrate the rule of law to a country that had not known impartial justice for three decades.

This called for some innovative approaches, he said.

For example, the team pioneered an evidence analysis technique that also turned out to be a poignant reminder of the victims&#8217; humanity.

Instead of mounting clothing recovered as evidence from skeletonized bodies on cardboard, and labeling suspicious tears or bullet holes for display in the courtroom, they dressed mannequins in the tattered garments.

At Camp Slayer, where the team set up its evidence processing site, the tent where eventually nearly 400 mannequins would eventually stand in ghostly silence was a "truly weird experience" for visitors, Trimble said.

Trimble also used the Geographic Information System, or GIS, to record his data, a cutting-edge computer tool that has never been used before in a genocide prosecution.

Most commonly used by the intelligence community, as well as some parts of the U.S. military, GIS uses high-speed computer processing to create layer after layer of data on top of a basic map.

Using laptops loaded with high-resolution computer maps and other GIS tools instead of pencils and graph paper saved Trimble&#8217;s team time at grave sites &#8212; a critical consideration, since "we were in a combat environment all the way," he said. "It was pretty dangerous."

But the real effectiveness of the system, Trimble said, came during his five-hour testimony in November 2006, during the trial.

Using a GIS-based PowerPoint presentation, Trimble wove "a story of how these people were grossly killed."

Slide by slide, Trimble showed the court a tapestry of mass murder, one bloody piece at a time. Some slides showed all the people who had been blindfolded in each grave. Others showed all the victims found with hands tied behind their backs.

Still others were heartbreaking photographs, including one of a little girl who had died wearing flowered jeans and small rubber boots stamped with a grinning cartoon kitty boasting he was "Top Kat!"

Even the judges cried at that one, Trimble said.

The killers, however, "did not enjoy having their noses rubbed in what they had done," he said.

The accused are allowed to confront accusers in Iraq, and when it came time for Saddam to speak, the dictator "started railing at me," Trimble said.

"He was upset. I felt really good."

But Chemical Ali "was just a stone-cold killer," he said.

Slowly and reverently, the team wrapped each body in a muslin shroud, as called for in the Quran. Each shroud was labeled with a discreet symbol to identify the victim&#8217;s head, so the person could be properly positioned to face Mecca during the burial.

Each member asked for the special honor of wrapping victims who had particularly touched them in some way.

"It was a very emotional thing," Trimble said. "It was sad."

Trimble said he always assumed that before burial, the Kurds would unwrap the bodies, pray over and wash the bones, and rewrap them.

No matter how much care the team had taken, he thought, the Kurds would not have trusted the Americans to treat their people correctly.

Trimble saw a photo later that showed he was wrong. It showed a muslin-wrapped Anfal victim&#8217;s burial. The tiny symbol indicating the head was clearly visible on the intact shroud.

Saddam was executed for other crimes before the Anfal trial ended. On June 24, 2007, the court returned a guilty verdict against Ali on all counts, and sentenced him to death.

Trimble said he understands why Iraq&#8217;s growing instability and violence overshadowed the Anfal trial, but he still wishes more people knew about the role America played in helping the Iraqis bring justice to the dead.

"Would it have changed the policy over there? No. But it might have made us seem more human," Trimble said.

"But we did our best. And I think down the road, we can do better."