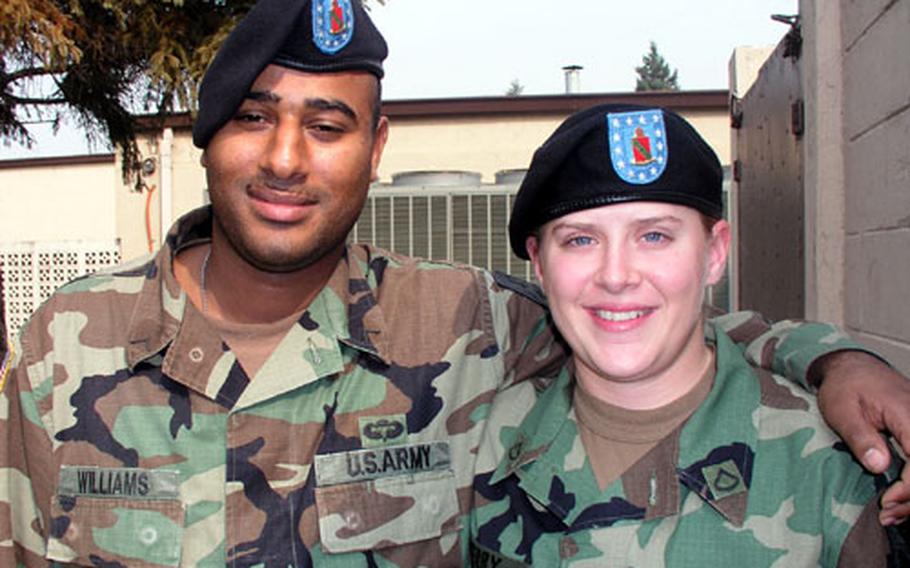 OSAN AIR BASE, South Korea &#8212; When Army Pfc. Wendy Terry was at work in a motor pool parking lot on a sunny morning last week, she noticed the soldier next to her suddenly hopping up and down on one leg.

The next moment he was on the ground moaning.

That&#8217;s when Terry and several buddies sprang into action.

Spc. William Trotter, 22, a Patriot tactical control assistant, snatched first aid kits off a nearby truck, dashed over, and began rummaging through the contents for the bandages, scissors, tape, and other items they&#8217;d need.

Pfc. Jessica Paroff, 20, a communications specialist, ran off to call an ambulance.

Pvt. Michael Williams got down and started pulling up the soldier&#8217;s pant leg. At the same time, Terry was telling the injured soldier not to worry.

In the ensuing, tense 10 minutes or so, the soldiers removed their buddy&#8217;s boot and sock, cleaned the wound with gauze, washed it further with fluid from an IV bag, applied a bandage and kept the leg elevated.

The Army had put Williams through its combat lifesaver course and the training kicked right in, he said.

Terry, who has worked in hospitals and around paramedics, ran on instinct.

Maintaining their own composure was important, too, said Terry.

Williams and Trotter then used the fireman&#8217;s carry to move the injured soldier to a nearby guard shack to await the ambulance.

On Wednesday, 35th ADA Brigade commander Col. John G. Rossi presented Terry and Williams brigade coins for their actions. Later, their first sergeant had Terry and Williams stand in front of a Charlie Battery formation while he told how Rossi had recognized them and why.