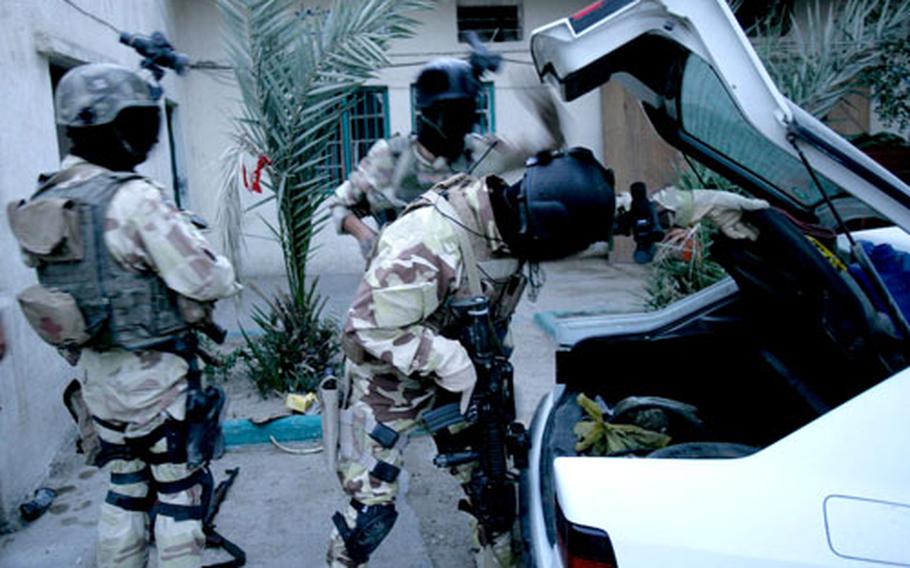 Many weapons were uncovered during the operation, including two rocket-propelled grenade launchers, three AK-47s, and one ammunition can with heavy machine-gun rounds. (Earnest Christian / U.S. Army) As they surrounded the compound, the U.S. and Iraqi troops were fired upon, U.S. officials said. The Iraqi forces killed 16 suspected insurgents, wounded three others and detained 18 people in house-to-house searches, U.S. military officials said in a statement from Baghdad.

But followers of the anti-American Shiite Muslim cleric Muqtada al-Sadr claimed those killed were innocent people praying the al-Moustafa mosque when the operation was launched around 6 p.m. Sunday.

The unnamed hostage was a dental technician with the Ministry of Health who had been kidnapped earlier that day, the military said.

&#8220;No mosques were entered or damaged during this operation,&#8221; the statement read, a contention that is being challenged by al-Sadr&#8217;s representatives. Aides to al-Sadr also claimed that one of those killed was the 80-year-old imam of the mosque.

Al-Sadr is at the head of a huge and well-armed Shiite militia, which fought U.S. troops in pitched battles in 2004. Al-Sadr has since shifted his public focus to the political arena, with his followers holding more than 30 seats in Iraq&#8217;s parliament.

According to news reports, the al-Iraqiya television network repeatedly broadcast footage allegedly recorded after the incident, showing bloody bodies on a concrete floor. The network also broadcast a statement from Salam al-Maliki, Iraq&#8217;s transportation minister and an al-Sadr follower, in which he said, &#8220;I think we are going to have a firm stance against the American forces because of this crime.&#8221;

On the same network, a spokesman for Iraqi Prime Minister Ibrahim al-Jafaari read a statement calling for calm and saying the U.S. command has promised to investigate the incident, which now appears to threaten the delicate political negotiations over the final composition of the new Iraqi government.

Lt. Col. Barry Johnson, a U.S. military spokesman in Baghdad, said the operation was only launched after observation of the site convinced the military that it was being used as a kidnapping cell.

&#8220;In our observation of the place and the activities that were going on, it&#8217;s difficult for us to consider this a place of prayer,&#8221; Johnson said, according to The Associated Press. &#8220;It was not identified by us as a mosque, though we certainly recognized it as a community gathering center. I think this is frankly a matter of perception.&#8221;

Shiite militias have been accused of infiltrating Interior Ministry forces and running death squads, particularly after the bombing of a revered Shiite shrine in Samarra.