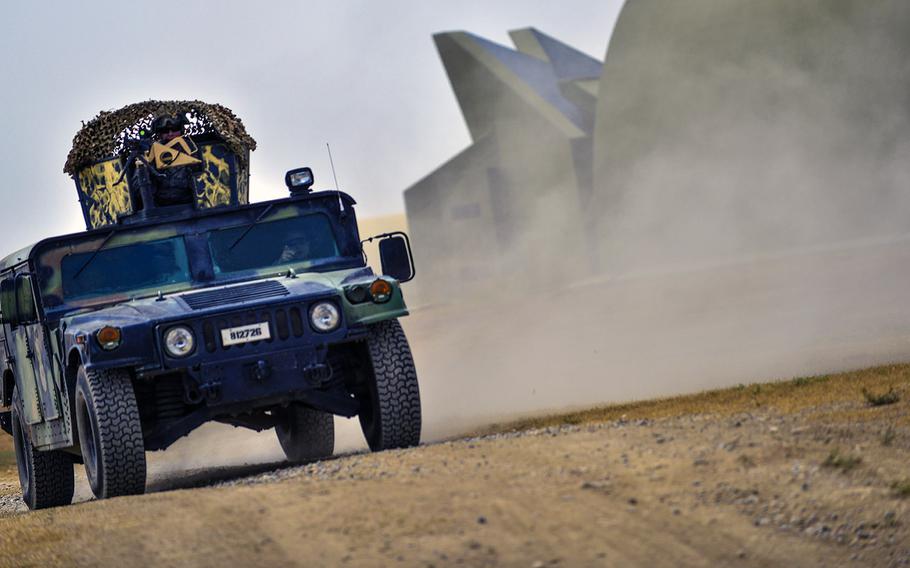 U.S. airmen drive in a Humvee during a readiness exercise at Incirlik Air Base Turkey, on Aug. 28, 2014. (Nicole Sikorski/U.S. Air Force)

STUTTGART, Germany — As Turkish tank crews passively watch from a hillside as the Islamic State group lays siege to the Syrian town of Kobani — raising the prospect of black flags flying less than a mile from NATO territory — a frustrated West is asking: Why isn’t Turkey taking a more robust role to stop the militant juggernaut?

The reason, experts say, is clear: The strategic objectives of the U.S. and Turkish Prime Minister Recep Tayyip Erdogan are reversed. America’s top priority is to defeat the Islamic State. Turkey’s is to avoid empowering Kurdish separatists — some of the very people holding out inside Kobani. Turkey also wants Washington to expand its campaign from targeting the Islamic State to ousting Syrian President Bashar Hafez Assad from power.

“Kobani is a vivid illustration of disarray and conflicting objectives of this hastily assembled U.S.-led coalition,” said Fadi Hakura, an expert on Turkey with the London-based Chatham House. “The U.S. and Turkey have different threat perceptions.”

Erdogan sees Assad as the main cause of instability in Syria, he said. “At the same time, (Turkey) do not want to help or encourage Syrian Kurdish fighters who are closely linked to the PKK,” Hakura said, referring to the Kurdistan Workers’ Party, which both Turkey and the United States also consider a terrorist organization.

The PKK has been fighting for self-determination for Turkey’s Kurdish minority for three decades. While Erdogan has said the Islamic State poses a danger to the region, he believes the PKK is a bigger threat to his own country.

“An aspect to all of this is ideology and religion, which we in the West have a hard time understanding,” said Marc Pierini, a former European Union ambassador to Turkey and scholar with the Carnegie Europe in Brussels. “ISIS is a Sunni insurgency and in religious terms, the Turkish government has a very strong Sunni base. They are never going to approve of the atrocities by ISIS, but there’s a built-in resistance to go after them.”

Critics argue that Ankara is being short-sighted in not seeing the Islamic State as a clear and present danger to Turkish security.

Ankara has also been criticized for not doing enough to seal the border with Syria, which has been the main conduit for foreign jihadists joining Islamist militias as well as for weapons supplies.

Those fighters were streaming into Syria to fight Assad, whose ouster is a Turkish foreign policy goal. Ousting Assad would enable Turkey to expand its influence in Syria and elsewhere in the Middle East where Turkish Ottoman sultans ruled until the Ottoman Empire collapsed at the end of World War I.

Like the leader of the Islamic State, Abu Bakr al-Baghdadi, Erdogan “wants a broader sphere of influence demarcated not by language or ethnicity but by a broader Islamic identity, albeit a much tamer one than what the Islamic State has forced upon its subjects,” says STRATFOR, a Texas-based firm that analyzes global threats.

Turkey’s end game in Syria is to replace Assad’s regime dominated by his Alawite religious sect with a democratic Islamist government “more akin to the one currently in power in Turkey,” according to STRATFOR.

While Erdogan has indicated willingness to step up his efforts against Islamic militants, Turkish cooperation is contingent on measures that help achieve his broader goals in Syria — ousting Assad. Indeed, Turkey wants a major U.S. escalation in Syria that focuses on establishing buffer zones and ramping up efforts to take down the Assad regime. Washington has given no sign it intends to deepen its involvement in such a way, focusing instead on efforts to destroy the Islamic State.

In the near term, that means Ankara and Washington are likely to remain at loggerheads.

Meanwhile, U.S. officials have been urging Turkey to soften its resistance, including allowing the U.S. Air Force to mount air attacks against the Islamic State from the Incirlik Air Base, a strategic hub in southern Turkey.

Defense Secretary Chuck Hagel on Thursday said the United States is seeking access to Incirlik as well as an agreement to help train and equip moderate Syrian forces.

So far, Turkey has refused.

“I think the current events are complicating an already testy relationship between Ankara and Washington, but over time the pressure on Turkey will mount,” Hakura said. “Turkey might, reluctantly, contribute more to the mission, such as allowing Incirlik. However, I think it is unlikely to be very much.”