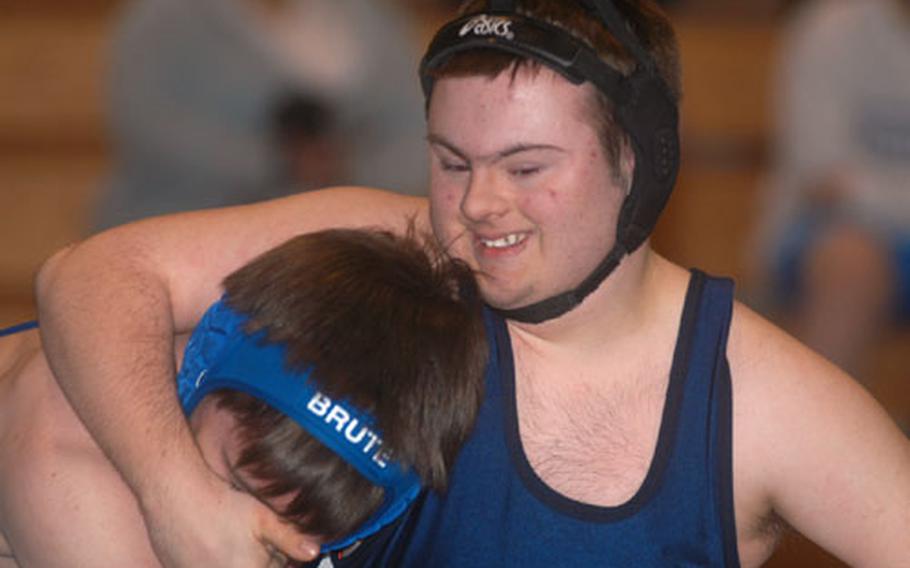 John Schaeufele of Lakenheath High School puts a hold on Kevin Nicholson of Brussels American High School during a wrestling meet at Alconbury High School. Schaeufele competes on the varsity team despite having Down syndrome. (Ron Jensen / S&S)

RAF LAKENHEATH, England &#8212; At 17, John Schaeufele became a varsity wrestler &#8212; a valued and popular member of the Lakenheath High School squad of grapplers.

This surprised and delighted his parents.

John was born with Down syndrome, a condition caused by the presence of an additional 21st chromosome. The effects are delayed development of motor skills, such as sitting and walking, and cognitive skills, such as speech and short term memory.

John, who attends a special education class, took part in Special Olympics events and other sports at the elementary school level.

&#8220;By the time he got in middle school and high school, we both assumed sports was above his reach,&#8221; Emily Schaeufele said. Jay Schaeufele is commander of the 100th Logistics Readiness Squadron at RAF Mildenhall.

But Bob Parkerson, the special education teacher at Lakenheath High School, had other thoughts.

He spoke with wrestling coach Darryl Brock about adding John to the team. The coach signed on, as did the school administration.

Parkerson then discussed it with John&#8217;s parents, who moved to England in July, the family&#8217;s first overseas assignment.

The parents discussed the idea, worrying &#8212; as parents do &#8212; about injuries in the rough-and-tumble sport. They asked their son, the oldest of four children, and he quickly agreed to give it a try.

Emily Schaeufele went to a few early practices. The other wrestlers, she said, seemed to be &#8220;a little softer and a little gentler&#8221; with her son at first.

Later, she said, as he caught on, they took off the kid gloves and went at it full bore.

The work required to be a wrestler has made John stronger and more fit, his father said. The teenager has lost weight and competes in the 145-pound class.

In the past three months, John has wrestled several times at the varsity level. That he has never won a regular match is of little consequence.

At a recent meet at Alconbury High School at RAF Alconbury, John was a whirling dervish in his match against Kevin Nicholson, a senior at Brussels American High School.

Brock admits to having a brief conversation with each opponent before the match with his newest wrestler, but the exact contents of such talks is private. Nicholson, for one, refused to even acknowledge the meeting.

But his actions express what his words may not.

John has become a full member of the team and was invited to take part in the divisional championships in Germany this past weekend.

Always outgoing, John now returns home from school even more excited and ready to talk about his day, his mother said.

John will finish his first year as a varsity athlete with no victories, although he did &#8220;win&#8221; an additional match against another school&#8217;s wrestler after the Alconbury meet had finished. But that hardly matters.

He has been wrestling all of his life, rising every day to face a challenger determined to pin him to the mat.

In that contest, he&#8217;s never even been knocked from his feet.

And that is cool.

Some facts about Down syndrome:

&#8226; Down syndrome has been around for centuries. Children who probably had the condition are seen in paintings from as far back as 1505.

&#8226; It was not until the 19th century that an English physician, Dr. John Landgon Down, recognized it. The syndrome now bears his name.

&#8226; The syndrome results from an additional 21st chromosome at the time of conception, but the cause is unknown. Although the risk increases with the mother&#8217;s age, babies with Down syndrome are born to parents of all ages. They are born at the same rate regardless of the family&#8217;s social, economic and racial background.

&#8226; Medical problems associated with the condition include increased risks of hearing and vision defects, heart abnormalities, infection, leukemia and thyroid disorders. It causes development delays in motor skills such as sitting, crawling and walking and slows the development of cognitive skills such as speech, language acquisition and short term memory abilities.

&#8226; With access to informed and effective health care, individuals with Down syndrome can expect to live to age 50 or 60. With appropriate education, therapy and social support, the majority of people can lead independent and useful lives.