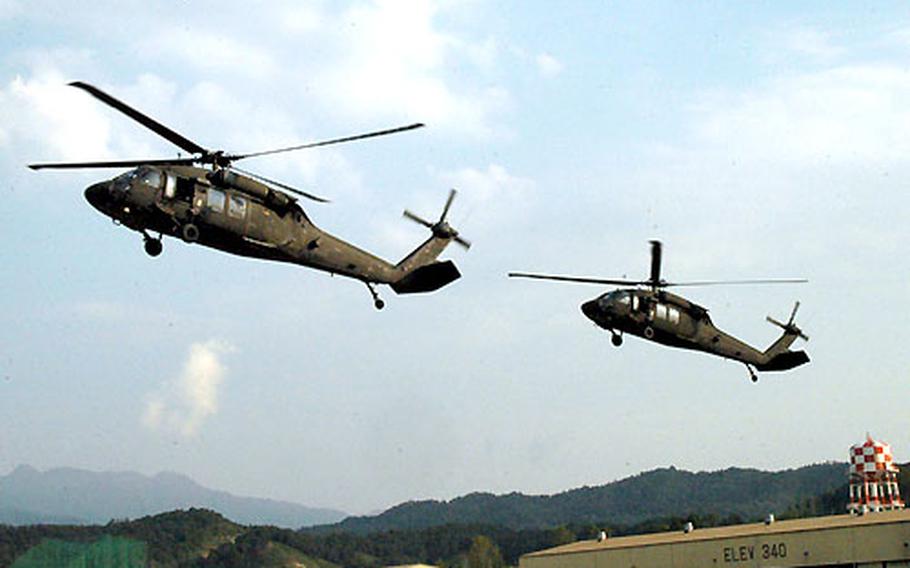 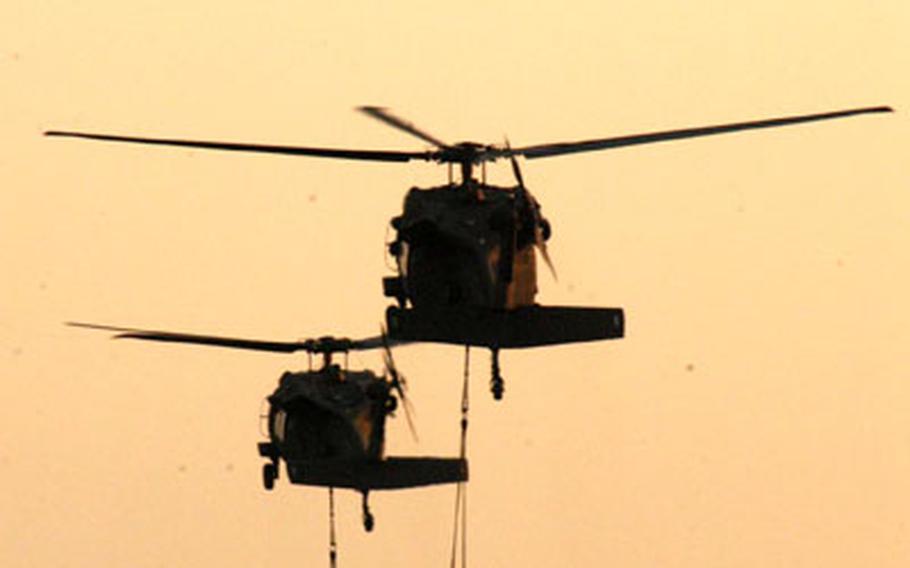 The 2nd Battalion, 2nd Aviation Regiment spent several days last week conducting air assault training missions from Camp Eagle, near Wonju. But instead of loading and unloading soldiers at the landing zones, the battalion&#8217;s Blackhawks merely paused for a few moments to replicate the time it would take troops to get on and off. And instead of carrying Humvees and supplies, some helicopters flew with large, square concrete blocks slung beneath them to simulate the equipment.

Both were air assault units based in South Korea until they converted to motorized infantry battalions and deployed to Iraq last month.

The Camp Eagle air assault training simulates the movement of an infantry company, Van Weelden said. Nine Blackhawks, each carrying 11 passengers at a time, simulated the transportation of 150 soldiers, three Humvees and a load of equipment for an infantry company, he said.

The unit also trained to deal with civilians on the battlefield, enemy prisoners of war and perimeter defense.

&#8220;We were able to get some good training setting up our equipment. It ensures that if we have to fight the North Koreans, our soldiers know how to set up this equipment and get it into play,&#8221; Van Weelden said.

The training also prepares soldiers for potential missions in Iraq or Afghanistan, he said. So far, no South Korea-based aviation units have deployed to Iraq with 2nd ID&#8217;s 2nd Brigade Combat Team (the Strike Force), which includes 1-506 and 1-503, he said.

Strike Force comes under the command of the 1st Marine Expeditionary Force, which has its own aviation assets.

Warrant Officer Jesse Edwards, 25, of Port Angeles, Wash., said the Blackhawk is a lethal weapon when it carries infantry but less lethal without passengers.

Pvt. Jonathan Holloway, 20, of Huntsville, Utah, who helped maintain the aircraft during the exercise, said it was his first visit to Camp Eagle after one and a half years in South Korea.