Concrete barriers in Iraq save lives,but contractors are paying a high price 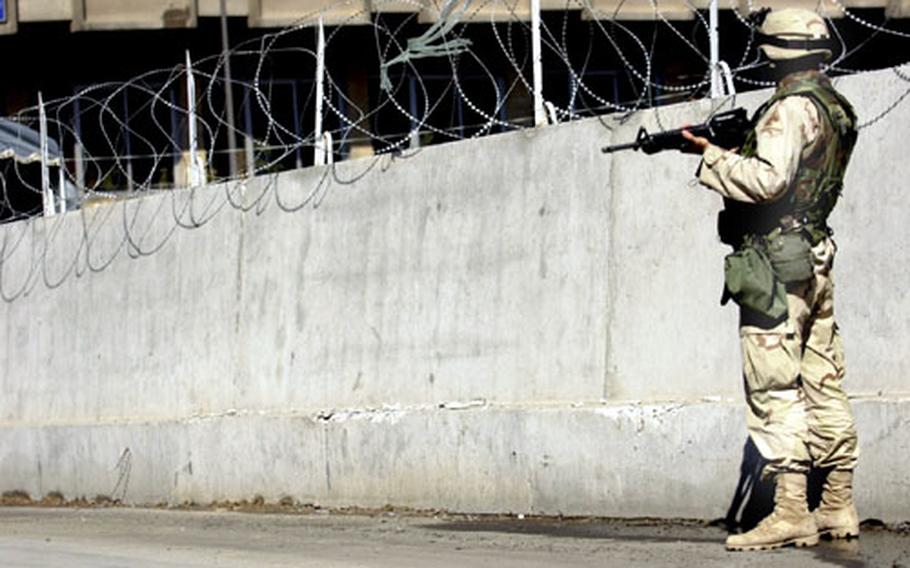 A U.S. soldier guards a checkpoint behind a protective concrete barrier. Iraqis say they are regularly attacked when delivering the concrete ramparts that protect U.S. troops and others connected with the American-led occupation in Iraq. (Jim Schulz / S&S)

A U.S. soldier guards a checkpoint behind a protective concrete barrier. Iraqis say they are regularly attacked when delivering the concrete ramparts that protect U.S. troops and others connected with the American-led occupation in Iraq. (Jim Schulz / S&S) 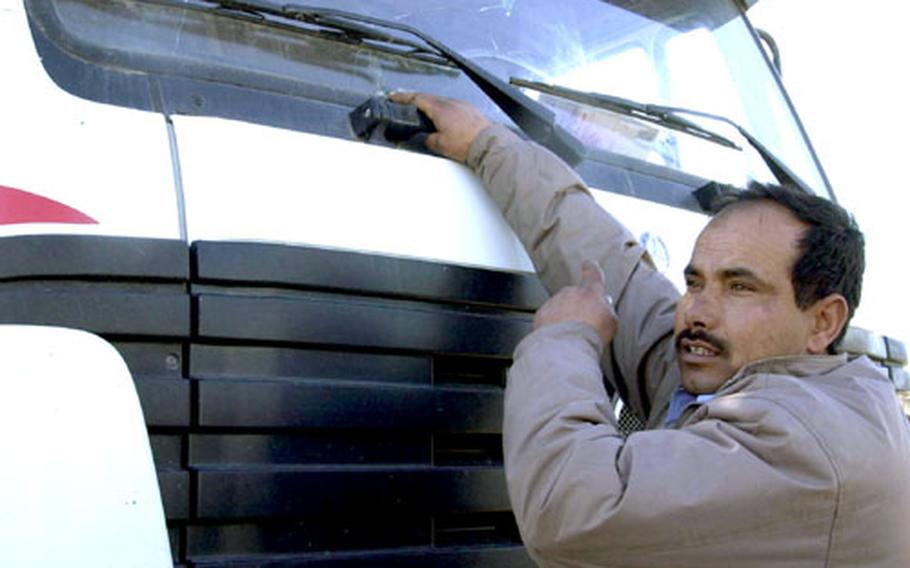 Iraqi truck driver Qasim Al-Janabi shows his cracked windshield, caused by someone hurling a rock. Al-Janabi, who delivers concrete barriers that fortify U.S. military compounds around Baghdad, said Iraqis also have shot at his vehicle because he is working for Americans. (Anas Dulami / S&S)

BAGHDAD &#8212; In a country where terrorist bombs are a clear and present danger, concrete blast barriers have become a critical landscape feature.

The U.S. military uses the barriers, some up to 10 feet high, to enclose its base camps. Civilian government officials, aid agencies and hotel owners wrap the concrete walls around their buildings like protective blankets. Barriers divide roads and surround parking lots.

But the walls made by construction companies across Iraq come at a potentially lethal price. Many contractors who build and deliver barriers to protect others risk their own lives doing it.

&#8220;They come in here with their windows shot out, their side window vents broken and bullet holes in their trucks,&#8221; said William Beavers, a Kellogg Brown & Root foreman. Beavers ushers dozens of delivery trucks a day into the Green Zone, home of the Coalition Provisional Authority and several military units.

One day last week, Iraqi driver Qassim Ali Al-Janabi rolled up to the Green Zone gate with a truckload of barriers. Al-Janabi has a short trip from a factory in downtown Baghdad, but he said Iraqis unhappy that he is working with Americans continually harass him.

His truck is pierced with bullet holes, and someone broke his windshield with a rock. The most dangerous part of his work is when he is exposed while loading the barriers onto the truck, he said.

Two drivers from his company were killed making deliveries, he said.

Al-Janabi bristled at the thought of his countrymen&#8217;s attacks.

Military contracting officials said it is difficult to say how much money barrier purchases pump into the economy because so many individual units, companies and agencies contract separately for the walls.

The 1st Armored Division Engineer Brigade has placed roughly 15,000 barriers at military camps in the area, the unit&#8217;s Capt. Antonio Buehler wrote in an e-mail to Stars and Stripes.

But no barriers protect the contractors who build and deliver the concrete fortifications.

One QIT contractor refused Stripes&#8217; request to visit his factory, fearing that the exposure would provoke additional attacks.

Khatib said he and his other managers regularly face threats.

He showed one bullet-riddled vehicle in which a QIT manager had been attacked while driving in the city. The manager survived.

Khatib said he alternates living at several houses around Baghdad to protect himself.

Al-Janabi, the Iraqi truck driver, said he has no defense.