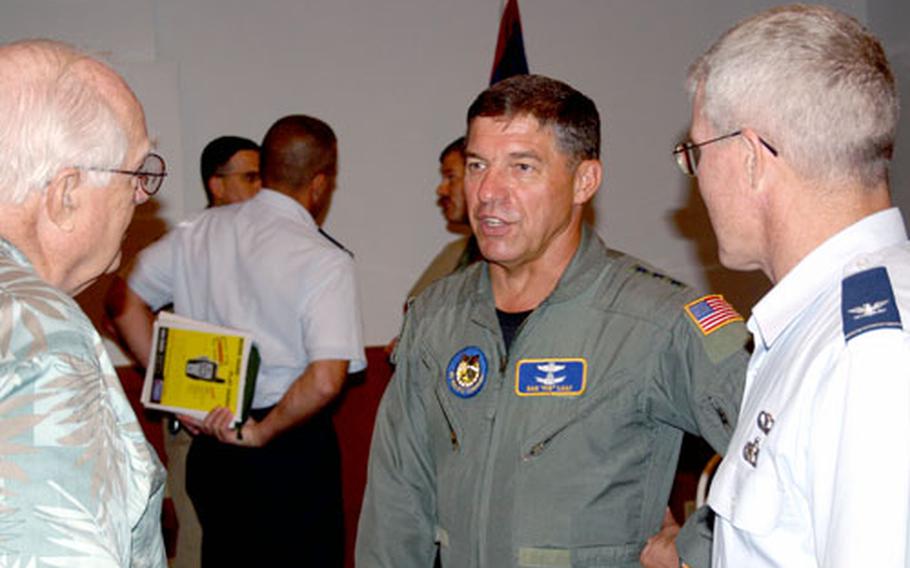 Air Force Lt. Gen. Daniel Leaf left Guam residents thirsting for more details last week on plans to build the infrastructure to accommodate 8,000 Marines plus their families and support civilians to be relocated from Okinawa starting in 2008.

Leaf, deputy commander of U.S. Pacific Command, was on the U.S. territorial island for several days to meet with officials and local groups to discuss the buildup. People at the meetings expressed concerns ranging from the effect of the buildup on the community&#8217;s infrastructure and social institutions to the origin of plants used to landscape housing areas.

Sen. Antonio Unpingco, chairman of the Guam legislature&#8217;s Committee on Tourism, Maritime, Military and Veterans Affairs, expressed similar disappointment after Leaf met with the legislature. He was, however, encouraged by the general&#8217;s announcement that the Navy recently has activated a joint program office to oversee the buildup.

On Wednesday, Leaf met with the Chamorro Nation indigenous rights group, environmental officials and a women&#8217;s focus group and held an open town hall meeting attended by about 60 members of the community. They included local business people, candidates for political office, students and indigenous rights activists &#8212; one of whom held a sign reading &#8220;Yankee Go Home.&#8221;

Indigenous rights activists cited a number of grievances against the federal government, including reparations for World War II damages and the effect of immigration to the island.

Leaf said he was there to hear all points of view.

During a lunch meeting Friday with the Guam Contractors Association and the Society of American Military Engineers, Leaf encouraged local business owners concerned about being crowded out of large contracts to make their thoughts and ideas for solutions known as soon as possible in writing to the Navy Joint Program Office and Navy Undersecretary B.J. Penn.

He also said the estimated $14 billion to fund the move &#8220;includes infrastructure for military needs only,&#8221; though he added there would be some shared benefit.