Concern over women's rights ahead of conference on Afghanistan's future 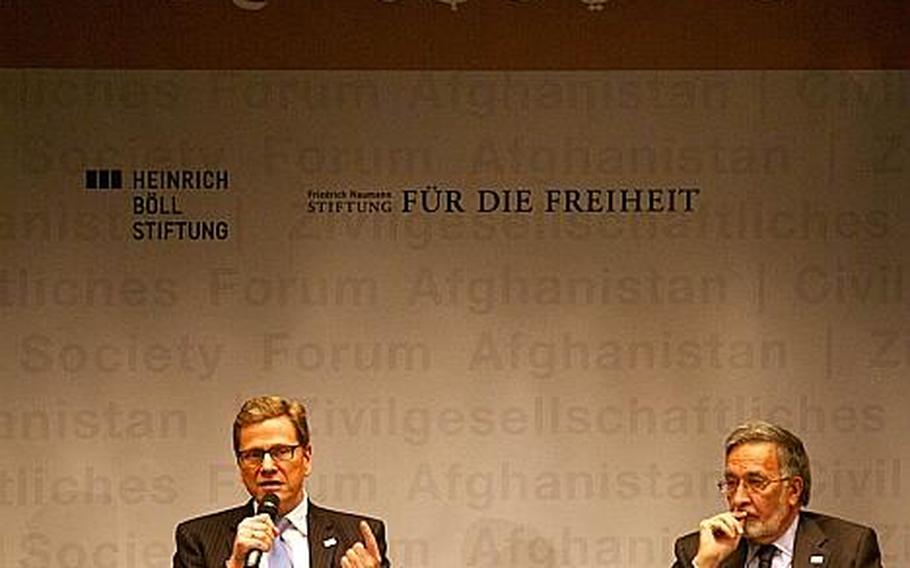 Buy Photo
Selay Ghaffar, director of Humanitarian Assistance for the Women and Children of Afghanistan, speaks Saturday during a conference on Afghan civil society in Bonn, Germany, which was attended by German Foreign Minister Guido Westerwelle, second from right, and Afghan Foreign Minister Zalmai Rasoul, right. (Matt Millham/Stars and Stripes)

BONN, Germany &mdash; As international delegates gather here Monday to discuss long-term commitments to Afghanistan, there appears to be agreement on who stands to lose the most as the war and the international presence begins to wind down: Afghanistan&rsquo;s women.

The topic was atop the agenda Saturday at an Afghan civil society forum leading into Monday&rsquo;s event, where leaders are expected to come to at least a tentative agreement on what international support in Afghanistan will look like after 2014, when most NATO combat forces are scheduled to complete their withdrawal.

Monday&rsquo;s conference is slated to focus on what needs to be done, as Afghans take over responsibility for their own security, to ensure stability and prevent the loss of gains that have been made.

Among those gains have been the rights of women. Since the Taliban&rsquo;s ouster in 2001, women have won the right to go to school, serve in public office and engage in public life. That progress, some at Saturday&rsquo;s forum said, cannot be sustained or extended without the international community&rsquo;s continued assistance.

Those rights have come at a price. The Taliban have sprayed acid in the face of girls who tried to attend school, or who refused marriage proposals.

&ldquo;If there is not refreshment on [the international community&rsquo;s] commitments, all the achievements we have made in the past 10 years will be in vain,&rdquo; said Horia Mosadiq, an Afghanistan researcher for Amnesty International.

As host of the conference, Germany appears committed to ensuring that doesn&rsquo;t happen.

In opening remarks at Saturday&rsquo;s forum, German Foreign Minister Guido Westerwelle said women&rsquo;s rights in Afghanistan are of &ldquo;special concern&rdquo; in the deliberations about continued support for development in Afghanistan, and said the conversation about the country was now expanding beyond &ldquo;transition&rdquo; to &ldquo;transformation.&rdquo;

&ldquo;A country can&rsquo;t afford to ignore the creativity and energy of half of its population,&rdquo; he said, calling for an expanded role for women in Afghan society.

Though women are afforded the same rights as men under the Afghan constitution, in practice, violations often go unchecked by Afghan authorities, who themselves have been among the violators.

The recent case of a woman thrown in jail after she was raped cast a harsh light on such abuses. Under outside pressure from international press and politicians and internal pressure from Afghan women&rsquo;s rights organizers, the Afghan president pardoned the victim Thursday before heading to Bonn.

&ldquo;We always have to be aware that the written constitution and the &mdash; really the presence of human and civil rights are not the same,&rdquo; Westerwelle said. &ldquo;I am not na&iuml;ve. I know that this will take some time because it&rsquo;s much more than a duty for the officials;&rdquo; citizens are also responsible for upholding those rights, he said.

Yet Afghans at Saturday&rsquo;s forum appeared concerned that, after 10 years of supporting the Afghan government and paying for everything from new roads and schools to politicians&rsquo; and soldiers&rsquo; salaries, the international community&rsquo;s patience in waiting for long-needed reforms is wearing thin.

Twice, Afghan Foreign Minister Zalmay Rassoul, who also attended the forum, asked for patience from the international community in dealing with issues of human, civil and women&rsquo;s rights.

He also tried to allay fears that efforts to seek a settlement with the Taliban would somehow undermine the rights Afghans &ndash; especially women &ndash; have gained over the last 10 years, saying that such rights are &ldquo;red lines&rdquo; that the Afghan government will not cross.

&ldquo;We are not going to compromise on achievements that we have made in the last 10 years,&rdquo; he said.

Numerous countries, including Germany, the U.S., France and Afghanistan, are conducting negotiations with the Taliban out of public view, she said, leaving out just one key audience: &ldquo;Afghan people.&rdquo;

&ldquo;We really want transparency towards what they&rsquo;re going to deal with the Taliban. This is our biggest concern,&rdquo; Mosadiq said.

Barry Salaam, an Afghan journalist who was among two Afghan civilian speakers at Saturday&rsquo;s forum, echoed that concern, and said that the gains in women&rsquo;s rights appeared significant mostly because of where they began 10 years ago, which was &ldquo;zero.&rdquo;

&ldquo;We have a lot to do to further improve women&rsquo;s conditions,&rdquo; Salaam said, noting that women are still harassed on the streets and discriminated against in the Afghan legal system.

Mosadiq agrees there&rsquo;s more to be done, and said that the conference represents much more than a discussion about Afghanistan&rsquo;s future, but also the international community&rsquo;s legacy in the country.