Concern mounts that N. Korea may be prepping for 6th nuclear test 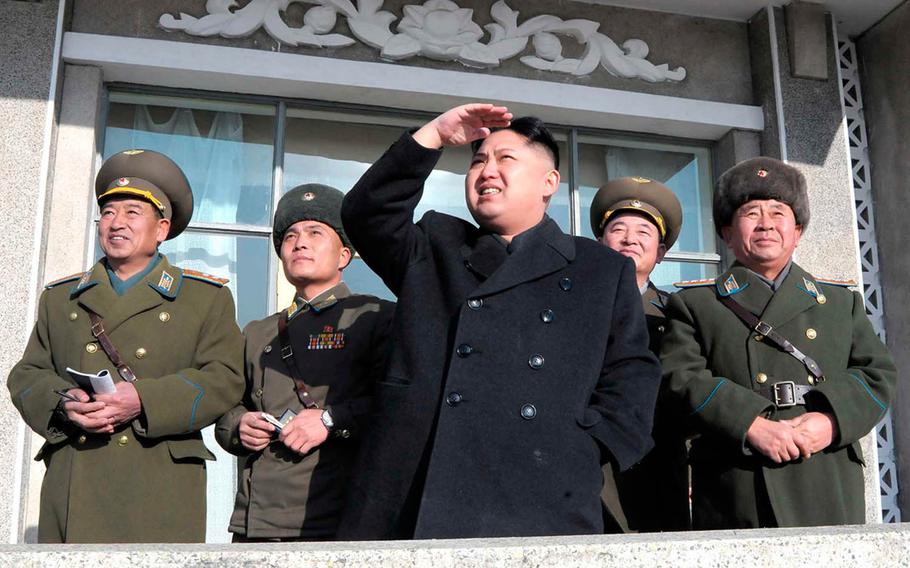 South Korea’s military and other officials have said the North appears ready to conduct a sixth nuclear test at any time upon orders from leader Kim Jong Un.

The communist state also may be preparing for “a different type of nuclear test from the past,” military spokesman Col. Roh Jae-cheon said Thursday at a news briefing.

He didn’t elaborate, but experts said the North would likely want a bigger explosion to send a strong political message as it seeks to force the U.S. and allies to accept it as a nuclear power.

38 North, a website that monitors the North’s activities, said a vehicle and a group of 70 to 100 people “standing in formation or watching” in a courtyard were spotted in commercial imagery from the mountainous Punggye-ri site on Tuesday.

“Such a gathering hasn’t been seen since January 4, 2013, which was followed by a nuclear test on February 12,” said the analysis by experts Joseph S. Bermudez Jr. and Jack Liu.

38 North, which is run by the U.S.-Korea Institute at Johns Hopkins University, recorded other signs of preparations, including water being pumped out of the north portal despite recent snowfall, “presumably to keep the tunnels dry for communications and monitoring equipment.”

The report posted Wednesday followed earlier sightings of vehicles and other activity at the site. But the authors stressed it was impossible to determine if the activity was preparation for another nuclear test or a ploy.

“The North Koreans know when commercial satellites are passing overhead and typically try to avoid activities during that time,” they said. “The fact these formations can be seen suggests that Pyongyang is sending a political message that the sixth nuclear test will be conducted soon. Alternatively, it may be engaged in a well-planned game of brinkmanship.”

North Korea has conducted five atomic tests — one in 2006, 2009 and 2013 and two last year. It also has stepped up its weapons program with the stated goal of developing a nuclear-tipped missile that could target the U.S. mainland.

“The size is likely to be bigger than those conducted in the past,” he said. “North Korea would like to get the United States to acknowledge it as a nuclear power, and it wants that recognition as soon as possible.” Kim also said the North could try testing a boosted fission weapon that uses hydrogen fusion to produce smaller, lighter warheads – the type it would need to fit on a long-distance missile.

Yang Mu-jin, a professor at the University of North Korean Studies in Seoul, agreed, noting Pyongyang needs to be careful not to threaten nearby China, its only major ally.

“This time it might be a boosted fission bomb because that’s in between atomic bomb level and hydrogen bomb level,” Yang said.

North Korea has previously said it carried out a hydrogen bomb test on Jan. 6, 2016, but U.S. officials and others cast doubt on that claim.

Its most recent explosion in September was believed to be its largest yet, with yield estimates ranging from 10 to 30 kilotons. It’s extremely difficult to confirm information about the reclusive nation. Pyongyang has test-fired more than two dozen ballistic missiles since last year despite punishing U.N. Security Council sanctions and international condemnation.

It frequently times the tests to coincide with high-profile political events.

President Donald Trump is due to meet with his Chinese counterpart Xi Jinping April 6-7 at Trump’s Mar-a-Lago resort in Florida, the Chinese Foreign Ministry confirmed on Thursday, according to the Xinhua news agency.

“North Korea is likely to conduct high-intensity strategic provocations such as a nuclear test or an ICBM launch on major days like the U.S.-China summit,” South Korea’s Foreign Ministry spokesman Cho June-hyuck told reporters on Thursday.

He also noted other significant dates, including the North Korean Supreme People’s Assembly on April 12, the birthday of the country’s late founder Kim Il Sung on April 15 and the anniversary of the founding of the army on April 25.