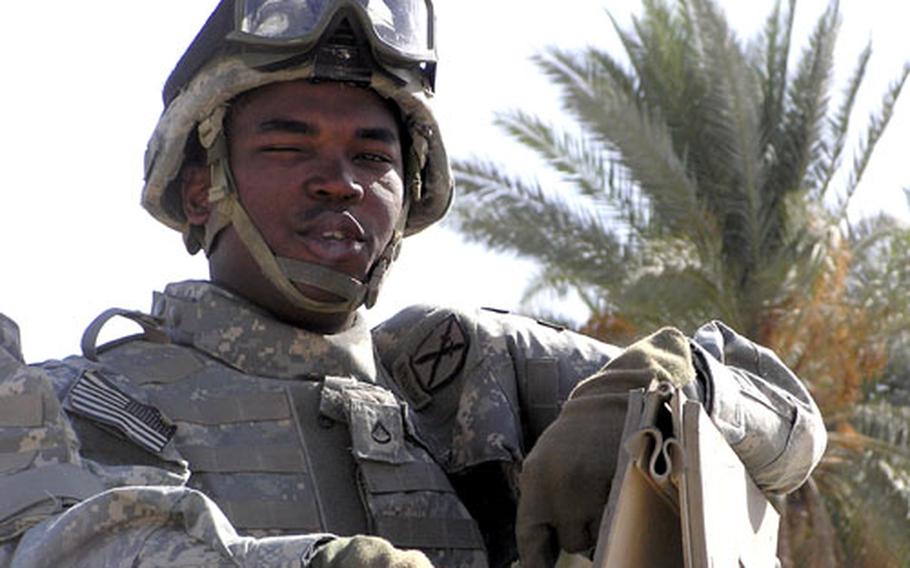 Pfc. Satieon V. Greenlee was killed by a sniper Oct. 2 in the restive area near Mahmudiyah, south of Baghdad. (Photo courtesy of Spc. Darcy Stark)

FORWARD OPERATING BASE MAHMUDIYAH, Iraq &#8212; In the corner of a tent on this small, Spartan base sit reminders of Pfc. Satieon V. Greenlee&#8217;s life: a dusty television and Xbox game console; an empty cot, already dusty with disuse; and an improvised field memorial decorated with his laundry bag, a crucifix and the written goodbyes of his fellow soldiers.

Greenlee, 24, of Pendleton, S.C., was killed Oct. 2 by a sniper in the restive area near Mahmudiyah, south of Baghdad. He was on an escort mission with the Personal Security Detachment platoon, part of Headquarters and Headquarters Company of 4th Battalion, 31st Infantry Regiment of the 10th Mountain Division of Fort Drum, N.Y.

Days later, soldiers from his platoon laughed and cried as they remembered an always-cheerful, hard-working soldier with a colorful &#8220;country gangster&#8221; accent, a fondness for mentholated cigarettes and beer (real and fake), an appetite for all kinds of music, and boundless dreams for his wife and two young children, whose picture he carried inside his helmet.

Greenlee, a Humvee gunner, dreamed of returning home and opening a day care center. He excelled at video games on his Xbox. He joked, he laughed, he swore, and he was rarely found without a cigarette in his mouth.

&#8220;He became a near-beer junkie,&#8221; Smith said with a laugh, recounting the time he found Greenlee attempting a near-beer binge in his tent.

His friends struggled to pinpoint the nature of his foot odor, wrinkling their noses in an unsuccessful attempt to describe the smell of Greenlee&#8217;s bare feet after a daylong mission.

His intensity made him a natural choice for a gunner, said Staff Sgt. Tony Smith, 27.

But he also had a deeply peaceful nature.

Members of Greenlee&#8217;s platoon said he professed a sense of foreboding before his final mission. During the mission, a vehicle broke down and communications systems crashed simultaneously, just before Greenlee was shot. He never got to fire his weapon.

But even to the end, his friends said Greenlee remained steadfast and brave.