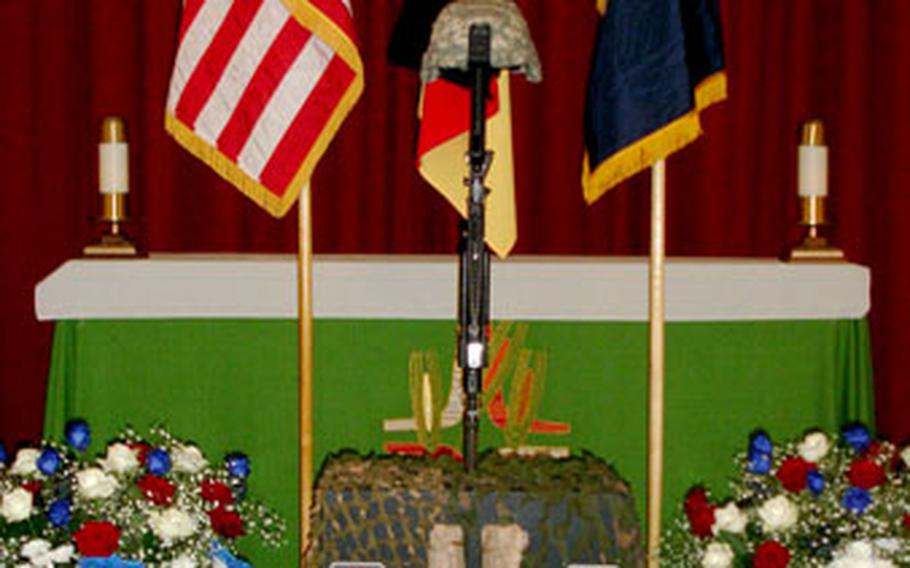 At a memorial ceremony for Pfc. Eric M. Kavanagh, symbols of his service rest at the front of Ledward Chapel at Ledward Barracks in Schweinfurt, Germany, Friday. (U.S. Army)

At a memorial ceremony for Pfc. Eric M. Kavanagh, symbols of his service rest at the front of Ledward Chapel at Ledward Barracks in Schweinfurt, Germany, Friday. (U.S. Army) 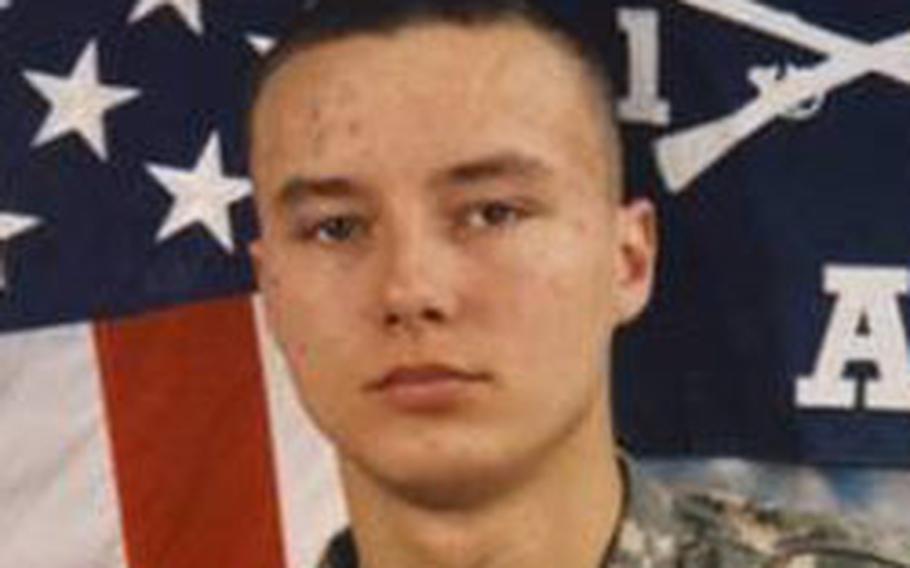 When Pfc. Eric M. Kavanagh of Glen Burnie, Md., was told at the last minute to grab his bags to catch a ride to war, he didn&#8217;t hesitate.

Michalski told this story Wednesday, about six weeks after arriving in Baghdad and a week after a roadside bomb tore through Kavanagh&#8217;s up-armored Humvee during a combat operation. Kavanaugh, 20, was the first member of his unit, Company A of the 1st Battalion, 26th Infantry Regiment, to die in Iraq.

At a memorial ceremony for Kavanagh in Schweinfurt on Friday, members of the 1-26 rear detachment retold remarks made at a similar ceremony in Baghdad two days earlier.

&#8220;The first thing she wanted to know was how Eric&#8217;s friend, Tom, was doing and if she could send Tom a package,&#8221; Schacht said. Spc. Tom Wise was injured in the attack that killed Kavanagh.

Rhonda Kavanagh told Schacht that soon after her son joined the Army, she had a dog tag made with a picture of him on it, which she wore everywhere.

Kavanagh&#8217;s mother had a lot to be proud of. In his nine months with the Blue Spaders, her son had earned a reputation all good soldiers want to have.

&#8220;Eric was the type of soldier that, no matter what time the mission ended, he would be outside with his flashlight, checking the fluids on the vehicle,&#8221; said Staff Sgt. Hy Taylor, Kavanagh&#8217;s squad leader, during the Baghdad ceremony.

Michalski, who also spoke at the Baghdad ceremony, said Kavanagh was always doing something extra, even if it wasn&#8217;t his job.

He recalled that when Kavanagh joined the unit as a dismounted infantryman, Army-speak for foot soldier, his only job was to &#8220;go back and sit, listen to music and clean his rifle,&#8221; Michalski said.

&#8220;For some strange reason, he was out in the cold motor pool, complaint-free, changing track pads with a bunch of dirty mounted guys,&#8221; Michalski said. Kavanagh later became a Bradley and Humvee driver.