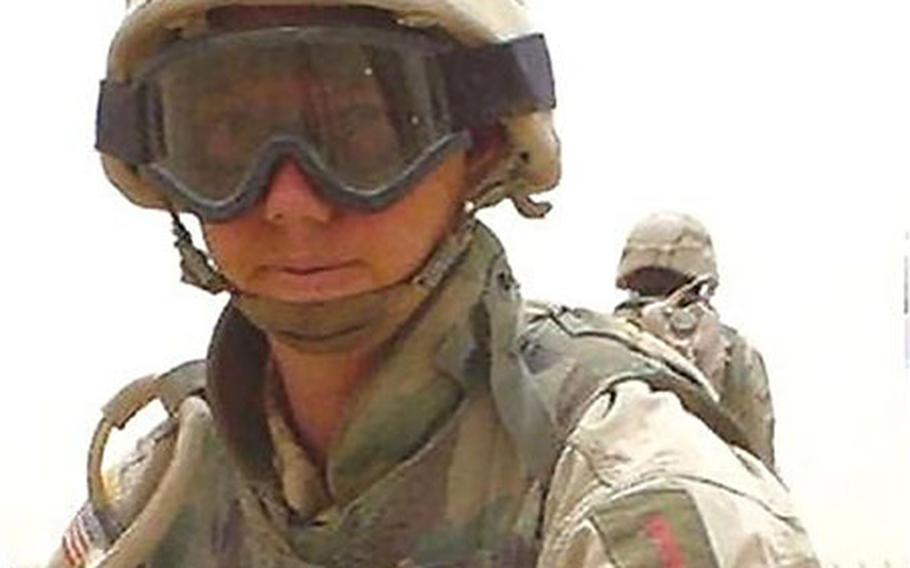 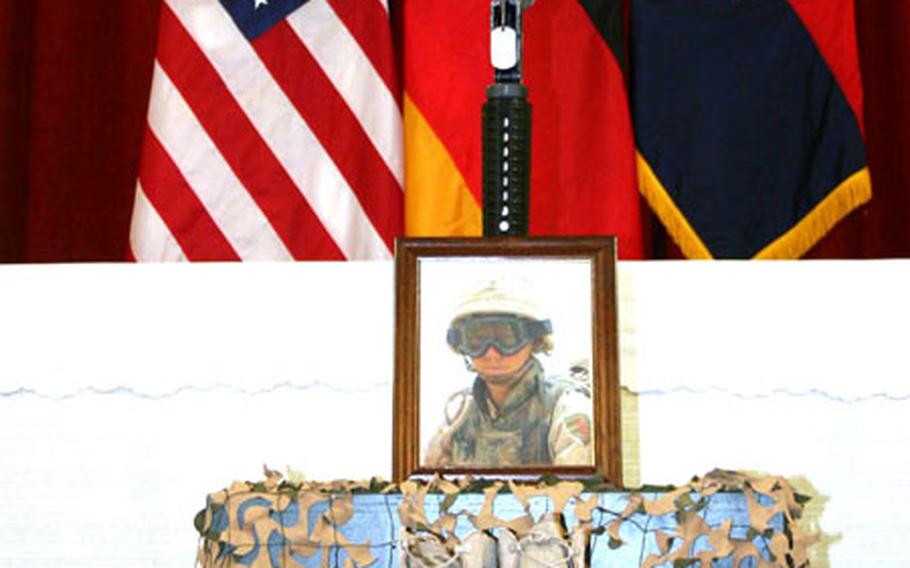 A memorial display for Spc. Michael Campbell sits in front of the chapel in Schweinfurt, Germany, on Wednesday. Campbell was killed in Iraq on May 19. (Courtesy of U.S. Army) Friends and fellow soldiers from the 1st Squadron, 4th Cavalry Regiment&#8217;s rear detachment in Schweinfurt, Germany, gathered Wednesday to remember the 34-year-old trooper who was killed May 19 when an improvised bomb exploded next to his convoy in Iraq.

Friends recalled Campbell as a fun-loving, boisterous soldier who loved nothing better than a hard day&#8217;s work.

Campbell grew up on a cattle ranch in rural Marshfield, Mo., joining the Navy in 1989 at age 19. He spent four years on active duty, including an eight-month deployment to the Persian Gulf in 1991 for Operations Desert Shield and Desert Storm.

After a four-year hitch, he left the sea for civilian life. Over the years, Campbell drove an 18-wheel tractor-trailer truck across country and drove cattle on the prairie in Montana.

&#8220;He was the first real cowboy I ever met,&#8221; said Capt. Anthony Margiotta, his platoon leader, whose tribute also was read at the service. &#8220;He often talked about his life roaming the Montana countryside; just him, his horse, his shotgun, his cattle and some of the most gorgeous landscapes in the world.&#8221;

After leaving the Navy, Campbell joined the Army Reserve as a truck driver. Last fall, he joined the active-duty Army and was assigned to the 1/4 Cavalry headquarters troop support platoon in December. Two months later, he deployed with the squadron to Iraq.

&#8220;He was an honest, hard-working soldier [who] put his brothers before himself,&#8221; recalled Capt. Jeff Paine, in another speech read at Wednesday&#8217;s service.

&#8220;He had a thick country accent, ears that stuck out a little bit, and an infectious smile that showed his heart was bigger than anything else about him.&#8221;

Campbell is survived by his parents, three sisters and one brother. He was posthumously awarded the Bronze Star Medal and Purple Heart.