Comrades bid farewell to soldier known for 'strength and honor' 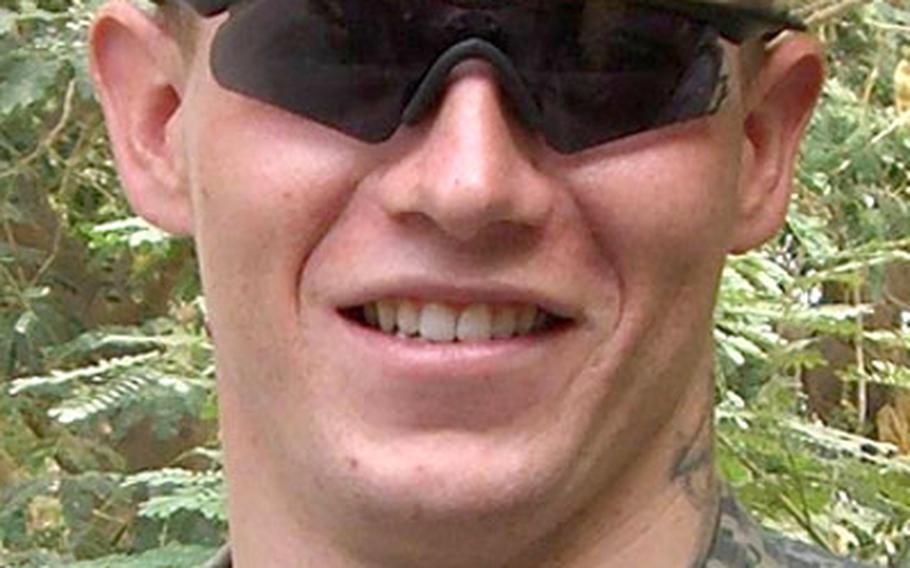 Sgt. Willsun Mock was killed Oct. 22 just outside Forward Operating Base Loyalty in Iraq when a roadside bomb exploded. The Kansas native was remembered this week in separate memorial services at FOB Loyalty and in Schweinfurt, Germany. (Courtesy to Stripes)

A 23-year-old redhead from Kansas, he had as many of the qualities of a Roman legionnaire as that of a modern soldier, and was the kind of man who would rather have faced opponents with a broad sword than an M4, friends said.

&#8220;He was a warrior who was born a millennium too late,&#8221; said Staff Sgt. John Gregory from Company C, 1st Battalion, 26th Infantry Regiment, 1st Armored Division, based in Schweinfurt, Germany.

Mock was remembered Wednesday in a heart-rending ceremony at Forward Operating Base Loyalty in northeast Baghdad, where scores of friends and fellow soldiers gathered to memorialize the Harper, Kan., native.

The decorated sergeant was killed Oct. 22 just outside the U.S. base when his vehicle struck a roadside bomb. An Iraqi interpreter was killed and two other American soldiers were wounded.

Friends said Wednesday that Mock was a man who lived by a simple set of morals and had forged his leadership qualities in Fallujah and other battlegrounds of Iraq. He had an affection for the comic book character Superman &#8212; both being rural Kansas kids &#8212; and became a big brother to many of the younger soldiers in the barracks, friends said.

&#8220;The soldiers of 2nd Platoon would have followed him into the fiery depths of hell and back,&#8221; Gregory said.

Mock was an instinctive leader who died in the position he naturally fell into &#8212; in front of his soldiers, said Lt. Col. Eric Schacht. Mock was &#8220;in the lead vehicle, where he was doing what he had been doing for two months: being out front, leading his unit,&#8221; he said.

The last time Schacht saw Mock, they parted with another of his trademark phrases.

Mock was the sixth man from the company to be killed since the unit arrived in Baghdad in mid-August.

In a photo memorial played before the start of Wednesday&#8217;s ceremony, pictures show a younger Mock as a bespectacled, heavy-set kid, enjoying football and spending time with his family.

But the pictures abruptly change when he reaches his Army years, and showed a clean-cut, heavily muscled soldier bearing various tattoos emblematic of his beliefs.

The ceremony to remember the man with a devotion to a simple warrior code was an achingly poignant affair, with many men wiping away tears throughout the memorial.

In Schweinfurt, many of the same comments were shared with the audience at a memorial service for Mock held at Ledward Barracks chapel Thursday.

At both services &#8220;Mock Smash,&#8221; as he was called, was remembered as a soldier who spent much of his little free time in Iraq keeping fit &#8212; &#8220;whether it was lifting weights at the gym, completing a 12-mile road march, running his soldiers on a four-mile run, planning for the next combat patrol, or serving as a mentor to young soldiers in the company,&#8221; said Mock&#8217;s company commander, Capt. Michael Baka, in Iraq.

Many of the men, including Baka, who saw the sergeant the day he died, said farewell to Mock with a simple repetition of the motto Mock lived by.

Baka&#8217;s response was the same used by soldiers at FOB Loyalty on Wednesday as they bade a final goodbye to a fallen friend.

Stars and Stripes reporter Mark St.Clair contributed to this story from Schweinfurt, Germany.