Computer woes at Ramstein schools give students day off 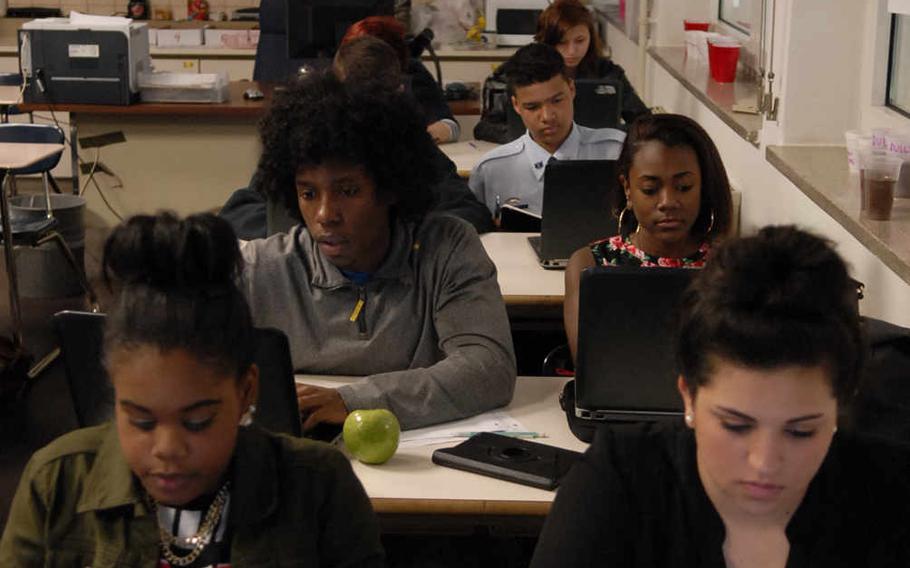 Sophomores at Kaiserslautern High School, Germany, use their school-issued laptops to write blog entries during a 2014 spring semester class. Some Department of Defense Education Activity schools are having extensive computer problems this school year that prevent teachers from tracking student progress. Two schools in Ramstein have a teacher work day on Friday to allow instructors to catch up on grades. ()

KAISERSLAUTERN, Germany — Two military schools on Ramstein Air Base are getting a special teacher work day because of extensive computer problems that have hampered the instructors’ ability to track student progress, use technology in the classroom and communicate with parents.

Students at Ramstein High School and Ramstein Middle School won’t report to school Friday. School officials hope that with less demand on the computer networks, technicians will be able to determine the cause of the problems and teachers will have better access to programs needed to update student progress reports and grade online assignments.

“It’s a great chance for us to test the system and see if it works better if we don’t have 1,800 kids on the system,” said Ramstein Middle School Principal Josh Adams, referring to the student population of the middle and high schools.

Adams said it’s not known what’s causing the problem. “Our organization is working furiously to figure out what the source is,” he said.

Leaders of the Federal Education Association — the Department of Defense Education Activity teachers’ union — say other schools in Europe and Pacific have been experiencing similar computer problems.

“From what I gathered from the field, this really has been one of the worst first quarters ever … because of these technology problems,” said Chuck McCarter, FEA president. “It’s widespread. I have messages from all over.”

“Intermittent access is our issue,” said Sharon O’Donnell, the principal at Ramstein High School. “We cannot rely on technology at this point to deliver direct instruction with any reliability.”

“Some days you can get through a couple of periods and then everything goes down,” she said.

At the middle school, staff members have not been able to consistently use “all of our critical systems,” Adams said. Midterm progress reports could not be emailed to parents because grades were not up to date. Some days, it’s not possible even to log onto a computer, he said.

Harvey Gerry, DODDS Europe chief of staff, said it appears there may not be enough available bandwidth to support all of the technology in use at the Ramstein schools. “The programs are functioning just fine if they have the bandwidth available,” he said.

“You have 100 megabytes per second available to push information in and out of the school. That’s pretty standard in our schools here in Europe,” he said. But the schools are using between 130 and 150 megabytes, he said.

Gerry said the Ramstein schools seem to be experiencing the most computer problems, but Kaiserslautern and SHAPE schools in Belgium have reported similar issues.

DODEA dispatched its deputy information technology chief to Europe this week “to lead efforts to identify capacity and other IT concerns,” Frank O’Gara, a DODEA spokesman, said in an email.

The organization is working with the Defense Information Systems Agency to increase bandwidth capacity at Ramstein, Kaiserslautern, SHAPE and other communities that have high Internet usage, he said.

DODEA is committed to improving technology services to all schools, O’Gara said.

Gerry said technology has become an integral part of DODEA schools. “As DODEA has put more of an emphasis on the use of technology in the classroom for instruction, teachers have responded to that and they are using technology at an increasing rate.”

But McCarter said DODEA policymakers didn’t plan well for that increase. “DODEA has pushed the technology usage and new programs well beyond the system’s capacity,” he said.

At Ramstein High School, teachers have resorted to downloading materials needed for instruction after hours, O’Donnell said. “It seems after the school day ends, our ability to access a site goes up.”

“This is a real challenge and it’s been really difficult,” she said.