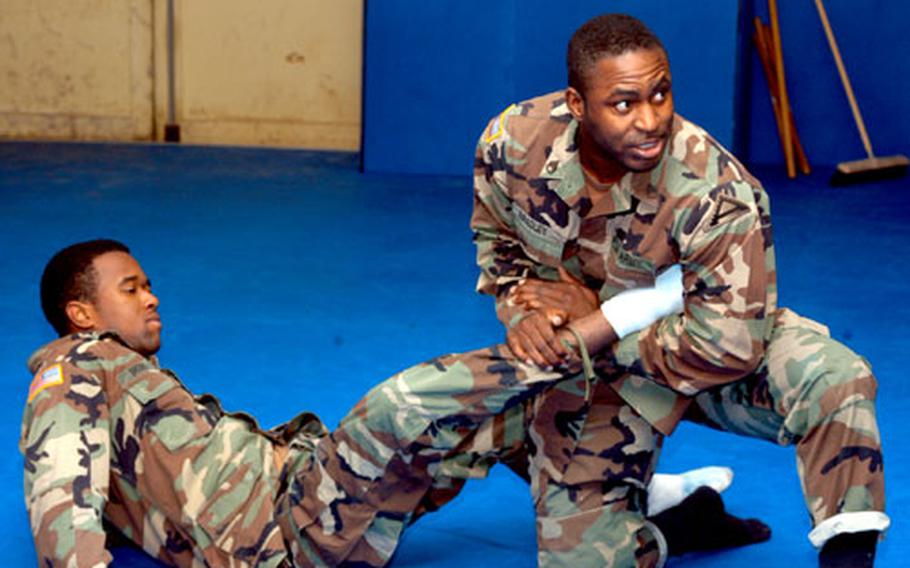 Staff Sgt. Benjamin Bradley, right, shows students how to defeat an opponent in Brazilian jujitsu with an ankle lock during a recent practice session in Hohenfels, Germany. (Ben Murray / S&S)

HOHENFELS, Germany &#8212; At the end of their weekly sparring session in Brazilian jujitsu, the students in Staff Sgt. Benjamin Bradley&#8217;s martial arts class shuffled around sheepishly, waiting for someone else to volunteer.

None of the students seemed to want to be the first through &#8220;the gauntlet,&#8221; an exercise that requires each student to attack his teacher alone, and one-by-one, be systematically wrestled into a painful arm lock or chokehold and forced to submit by tapping the ground to signal surrender.

Though the lean, compact Bradley doesn&#8217;t impart a particularly intimidating physical presence while on the mat, the students know they have good reason to avoid grappling with the signal support systems specialist from Hohenfels&#8217; 1st Battalion, 4th Infantry Regiment.

Four good reasons, to be exact: one for each of his black belts in tae kwon do, Shotokan karate, judo and Kyokushin karate. Or five if they count his undefeated record in amateur Ultimate Fighting Championship-style bouts &#8212; no-holds-barred cage matches in which combatants wear only minimal padding on their knuckles and feet.

The long list of fighting accomplishments is part of Bradley&#8217;s life of duality: by day he is a mild-mannered father of three and self-described &#8220;radio and computer geek,&#8221; while in his free time he turns into a lethal hand-to-hand fighter.

Though Bradley understands the art of agonizing joint manipulation and gets regular practice in choking people to the point of unconsciousness, he&#8217;s pretty even- keeled outside of the ring, said Pfc. Matthew Green, a student and coworker of Bradley&#8217;s from the 1-4 Regiment.

Green said Bradley often taunts other soldiers with a good-natured challenge for a boxing or karate match, but usually isn&#8217;t serious.

As a boss, Bradley&#8217;s management style is much like his teaching method, Green said. He&#8217;s attentive to detail and insistent that his students and coworkers get things right, he said.

Green got a chance to know Bradley better in late January when the two entered the Brazilian jujitsu European 2005 Championships in Lisbon, Portugal. Bradley took home the gold in his division in 2004.

For the 29-year-old staff sergeant, the Lisbon event was a return to competition after shattering his elbow in a car accident near Hohenfels last June.

&#8220;They were sure I&#8217;d be able to keep my arm,&#8221; he said of his original prognosis. Doctors eventually inserted two metal plates and five screws in his arm to rebuild the joint.

Following four months of physical therapy, Bradley was on the mat to defend his title. Working his way to the finals, he took silver in the blue belt super heavy division, losing his final match on points.

Bradley said he will eventually work his way up to black belt in Brazilian jujitsu, but the process takes years, even with two healthy elbows.