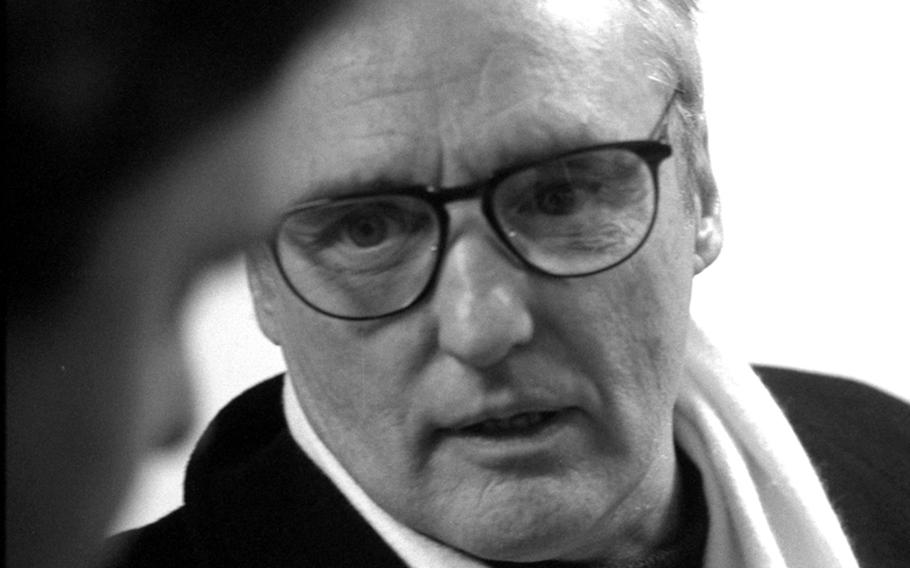 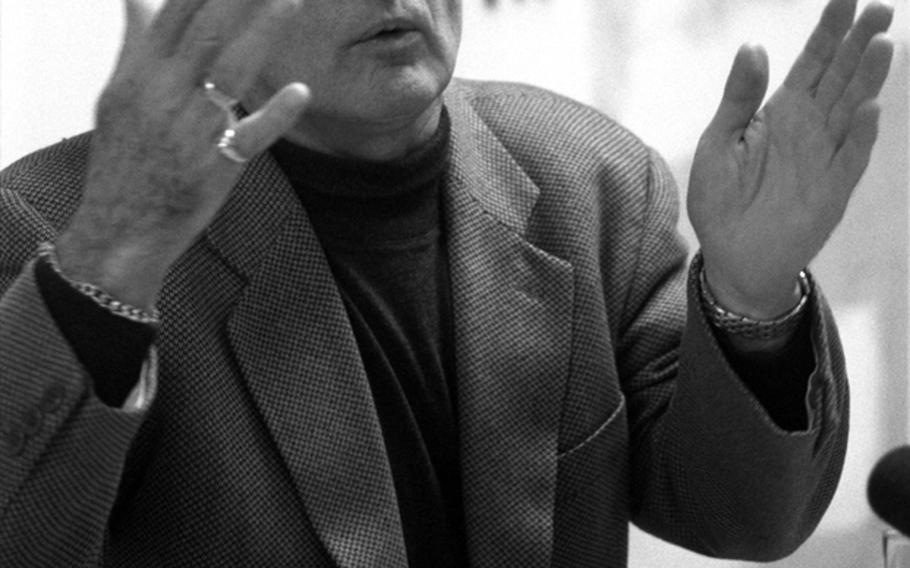 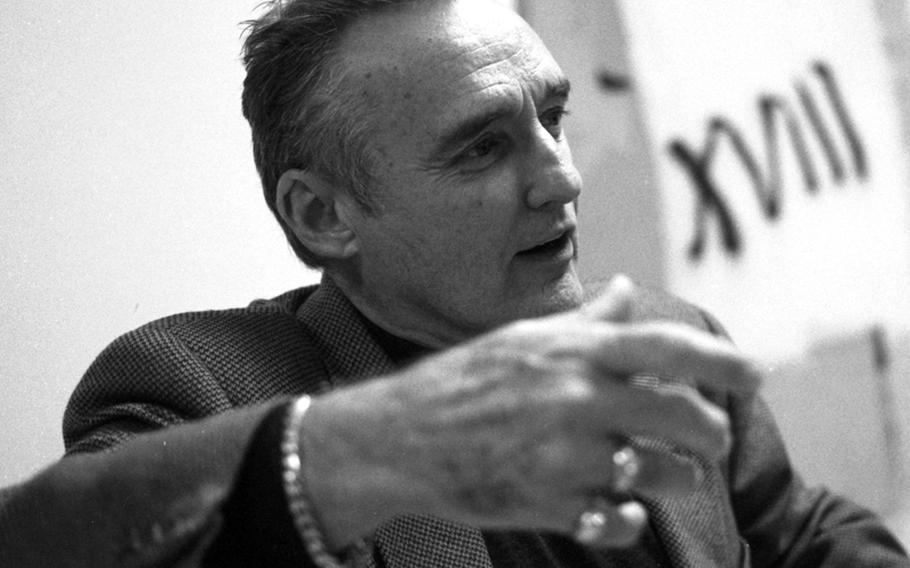 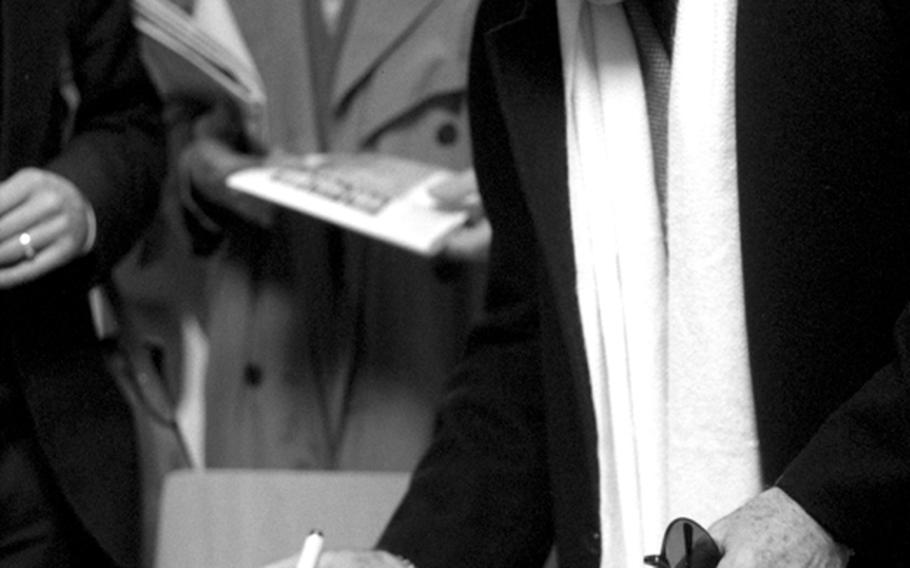 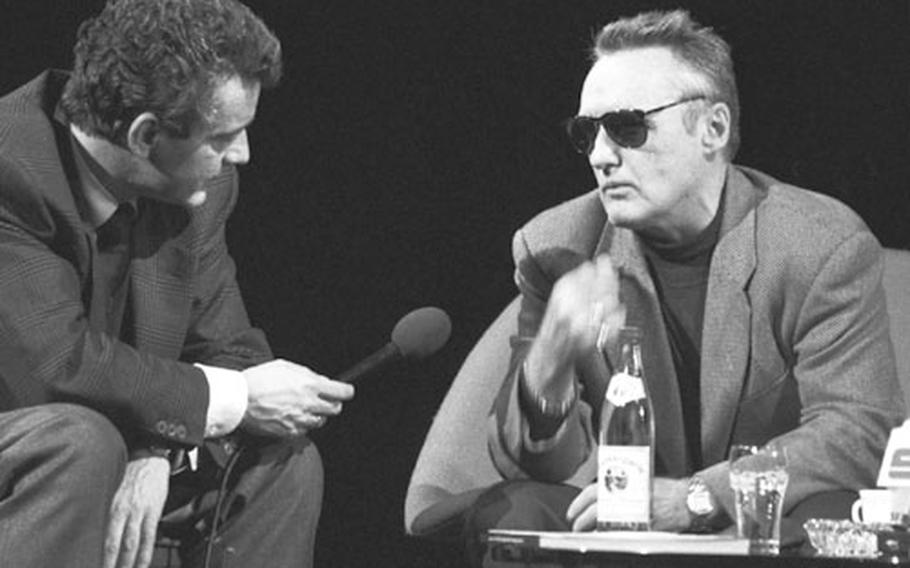 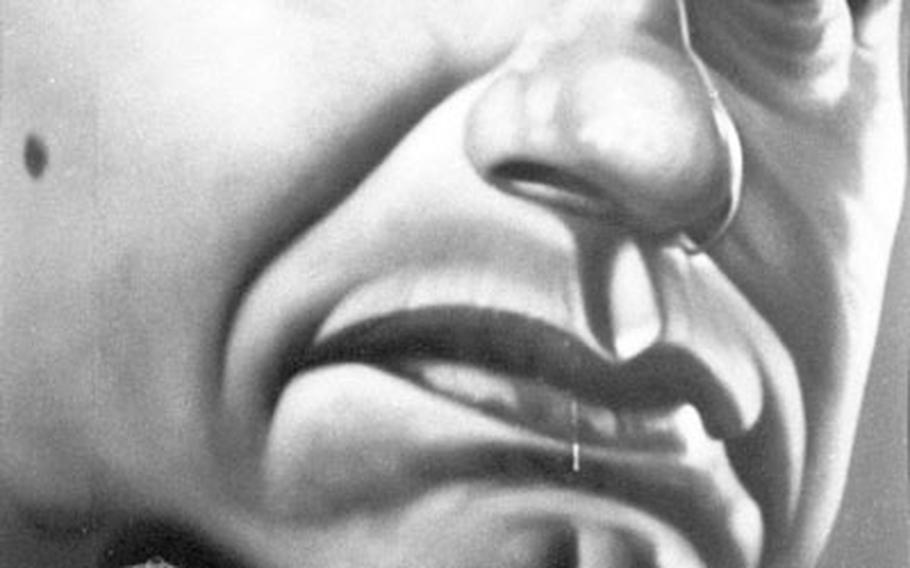 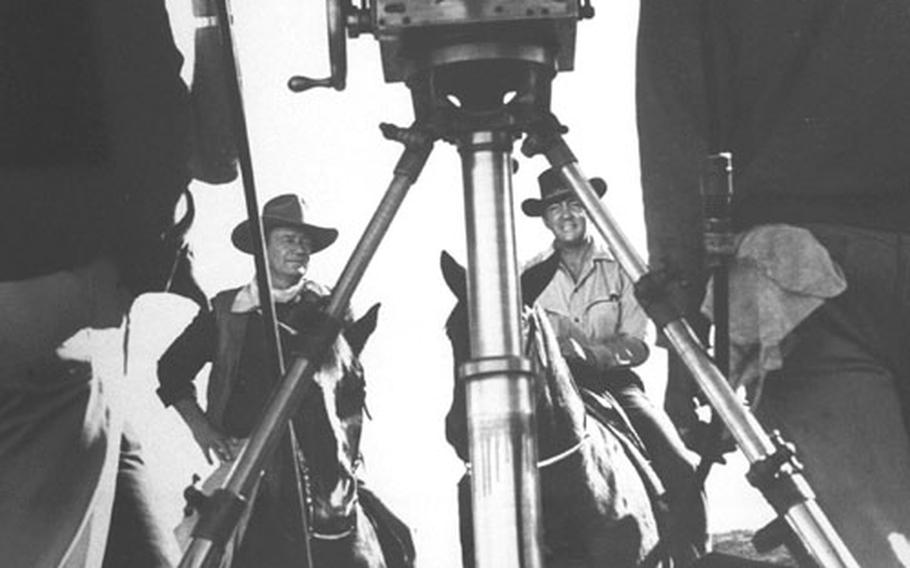 Buy Photo
A Dennis Hopper photo of John Wayne and Dean Martin on the set of "The Sons of Katie Elder." (Ron Jensen/Stars and Stripes)

Dennis Hopper was having a good time Friday in F&uuml;rth, Germany, where an exhibition of his photographs and paintings opened for a five-week run.

A questioner asked the actor-director-writer-artist: Why do you paint?

He replied, "Because I have paint."

When he was asked why he was hooked on drugs and alcohol for so many years, the now clean and sober Hopper said, "I liked it."

And when informed that Henry Kissinger was born in F&uuml;rth, Hopper quickly asked, "Couldn't you have kept him here?"

But the creating force behind movies such as Easy Rider and Colors is dead serious about his art &mdash; all of his art.

"I am a compulsive creator," he said.

He makes no distinction between writing, directing and acting in movies, painting on canvas, taking photographs or writing poetry.

"I consider all those things one thing. They are just creating," he said.

Hopper, 56, seemed a bit haggard as he began a news conference that was followed by a public discussion taped for German television in the F&uuml;rth city theater prior to the exhibition's formal opening.

But he quickly warmed to his subject and displayed a remarkable knowledge of art, tossing around names from the world of art with ease and discussing-the development of modern art with a learned comfort.

But, as he explained, art has always been a passion for him.

He was an early supporter and fan of Andy Warhol, he said, and bought one of the late artist's first Campbell's soup can paintings for $50.

But mention Hopper's name and several images come to mind, all of them from his films. There is the long-haired, bearded rebel riding alongside Peter Fonda in Easy Rider, a film that still somewhat defines, albeit simplistically, the Sixties.

Apocalypse Now, a 1979 film that turned the Vietnam War into a drug-induced, surrealistic nightmare, featured Hopper as an off-center photojournalist.

And there is an image from many years later, that of the sadistic dope and sex fiend in Blue Velvet in 1986.

Hopper's public image is not far from those cinematic ones. He was for years a drug abuser and hard-drinking alcoholic, an untamable Hollywood rebel who made himself unemployable.

It is that image, perhaps, that brought a mostly young audience to his public discussion, many of them only grade school-age or younger when Easy Rider debuted.

Now, however, nine years removed from his last drink of alcohol and 10 years distanced from drugs, Hopper is a pleasant, calm man who seemed a bit uncomfortable in the spotlight, but still glad to be where he was.

He explained his substance abuse as part of his compulsive creativity, that he thought it was necessary to abuse something in order to create.

"I didn't know he was looking for the tube of paint," Hopper joked.

Hopper admitted that his abuse nearly :killed him as it has so many others. Such a death is far from heroic, he said.

"John Barrymore was drinking perfume on some yacht somewhere, I mean, my god," he said.

Job offers stopped coming during the lowest point of his abuse, he said, but his creativity continued.

Whatever it is that they momentarily unlock provides the artist with a brief inspiration, he said. But the abuse will eventually overpower the abuser and the creativity shrivels.

The black and white photographs and painted canvases on display in F&uuml;rth are part of an exhibit of work from Hopper and Warhol that is now touring Europe. His work was pulled out temporarily for this exhibit.

He photographed from 1961 until 1967, he said, when he put down his camera to begin writing and directing Easy Rider. He never picked it up again.

Some familiar faces are found in his work. There is Peter Fonda standing before a cartoon likeness of Edward G. Robinson. Warhol is there. So are James Brown, John Wayne and Dean Martin. And The Byrds and Ike and Tina Turner.

But other photos are simply images, such as decaying advertisements painted on walls or the shattered windshield of a car following a Harlem riot.

"At that time, my only outlet of creativity was the camera. I took my camera everywhere," he said. "They used to say, 'Oh, here comes the tourist.' "

These paintings date from 1986 and resemble street graffiti, each accompanied by one or more computer photographs of scenes of violence.

Hopper explained that he was directing Colors, a movie that starred Sean Penn and Robert Duvall as two Los Angeles policemen battling street gangs, when the inspiration came.

Because Los Angeles is an "unvisual" city, he said, his eyes were drawn to the gang graffiti scrawled on walls. Gangs define their territory with such spray-painted emblems, and competing gangs may paint their message over that of their rivals.

"These are little scratches, little epitaphs, of the people on the street," Hopper said.

The city, however, will cover up the graffiti only to have it reappear, so Hopper's work incorporates this as well, with layer upon layer.

Because Colors was about the gang life, Hopper coupled the painted canvases with computer-generated images from his movie &mdash; violent scenes &mdash; to create what he calls "the landscape of the place where I live."

The violence in the images attracted several questions, which Hopper explained by saying, "I wanted them to be about violence. That's what the street is about."

America, he said, is a violent country with a history of violence.

His neighborhood in Venice, Calif., is 50 percent Mexican, 25 percent black and 25 percent white, he said. During last spring's L.A. riots following the Rodney G. King trial, houses near his were burned down.

He could move, he said, "but I would rather live with the populace of the country."

Hopper was quietly charming throughout the news conference, the public discussion and a quick but polite autograph-signing session. If he is an artist enjoying his art, he is also a man enjoying life.

As he admitted earlier, there was a time when events such as this were not in his future.

"I'd have been in prison or dead and not having this wonderful day in F&uuml;rth," he said. "I'd rather be here."