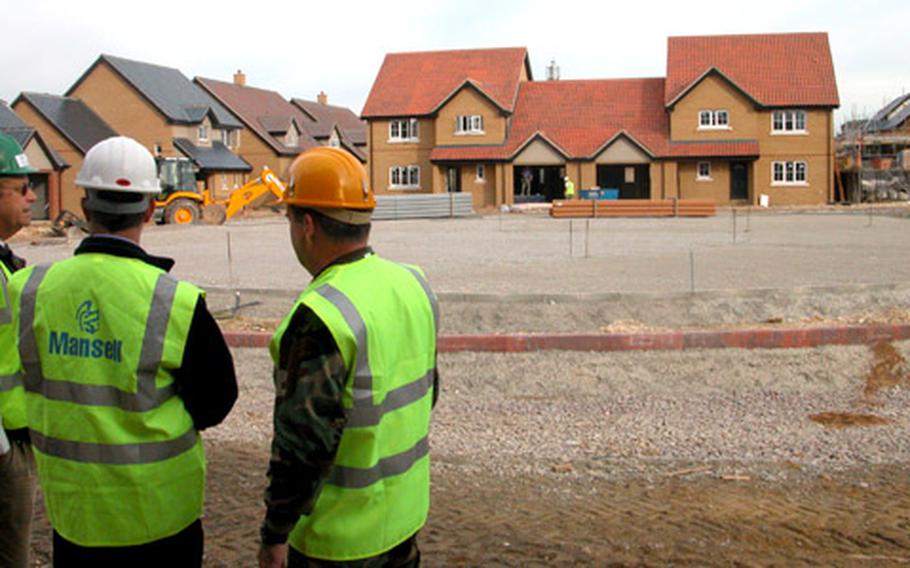 The Liberty Village housing development at RAF Lakenheath will feature a denser design than exisiting housing, but will allow for more parks, paths and playgrounds.The gray area at the center of these emerging homes will be a playground. (Geoff Ziezulewicz / S&S)

The Liberty Village housing development at RAF Lakenheath will feature a denser design than exisiting housing, but will allow for more parks, paths and playgrounds.The gray area at the center of these emerging homes will be a playground. (Geoff Ziezulewicz / S&S) 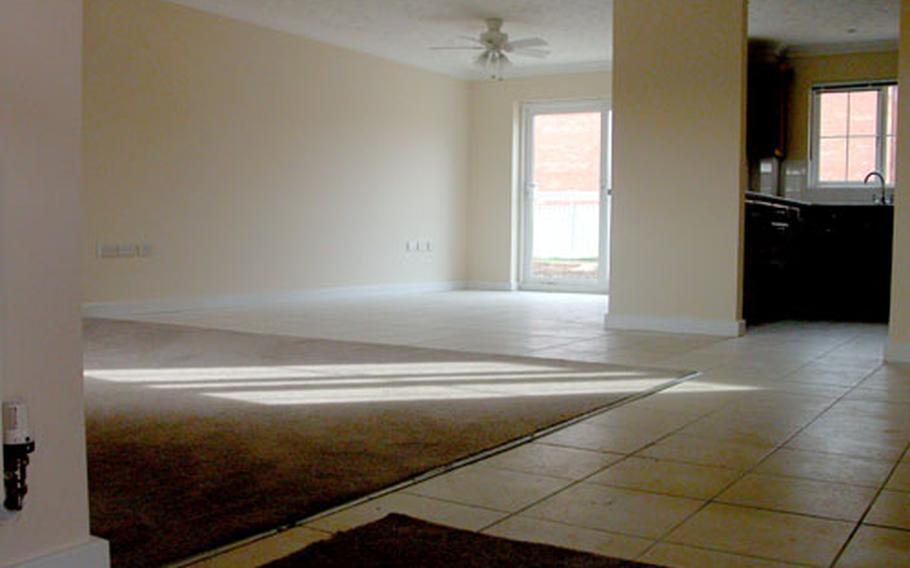 Construction is just about finished on the first of 606 new homes that are being built over the coming years at RAF Lakenheath. The first 27 units are slated to be handed over on Dec. 1, and they mainly await a clean-up before their new tenants move in. (Geoff Ziezulewicz / S&S)

RAF LAKENHEATH &#8212; Like many of the facilities throughout European Command, the housing at RAF Lakenheath is a throwback to another time. A time more than 50 years past.

So, when Air Force planners were deciding whether to renovate these wheezing structures or build new ones at the air base, the decision was made to just knock it all down. Sometimes it&#8217;s better to start from scratch.

The fruits of that decision, made about five years ago, are becoming more apparent with each passing day at Lakenheath, as builders finish the first phase of a five-part, approximately $200 million housing development called Liberty Village.

The first 27 of what will eventually be 606 new homes are slated to be handed over to airmen and their families Dec. 1, said Lt. Col. David Carlon, an Air Force civil engineer for the United Kingdom.

As phase one&#8217;s 89 units are finished this year and next, the demolition of old homes on the phase two site will begin this month, Carlon said.

It&#8217;s a long, drawn-out process, and construction will continue for the next couple of years before all 606 new homes are in place, he said.

The human factor has resulted in the Liberty Village project being done in deliberate chunks, and it&#8217;s been a delicate balancing act to decide when to move airmen and their families out of old housing that is slated for demolition, Carlon said.

Factors such as how much longer the airman will be at Lakenheath and whether he is deploying are being taken into consideration, Carlon said. People are put in temporary lodging or moved off base if their current home needs to be knocked down.

In the meantime, Lakenheath housing and Air Force planners continue to search for other viable and permanent off-base housing options for the more than 10,000 airmen and family members who constitute the Lakenheath community.

Today&#8217;s housing facilities at Lakenheath are multi-unit, aged brick buildings that seem to be spread out randomly across the base, with little or no visible planning, Carlon said. While Liberty Village will feature a denser layout of units, the design will allow for a more neighborly feel, with playgrounds and parks interspersed between houses and walking paths connecting much of the development.

Biking down the street with his 4-year-old daughter Sophie last week, Senior Airman Daniel Martinez said he would welcome some new housing at Lakenheath.

The unit he and his family live in now, just down the street from the Liberty Village site, is not terrible, but it is getting on in age.

Martinez said there are also problems with older water fixtures that he would like to see go away with the new units.

Liberty Village also had to be approved by the Forest-Heath District Council, which is the local English governing body, said Howard White, project manager for the Ministry of Defence&#8217;s Defence Estates, which oversees British military land.

Compromises had to be reached with the local governing council to make the project go forward, he said. As a result, the whole development will have a smaller, more decidedly British feel to it.

But concessions also were made in favor of the Americans, and Liberty Village homes will feature larger rooms and garages than their British counterparts would outside the base gates, White said.

Residents can actually get an American car in the garages, he said.

Among other amenities, homes will feature English and American power outlets, Carlon said.

In order to get approval for the new housing, the whole thing had to be designed in a way that lined up with English standards, White said.