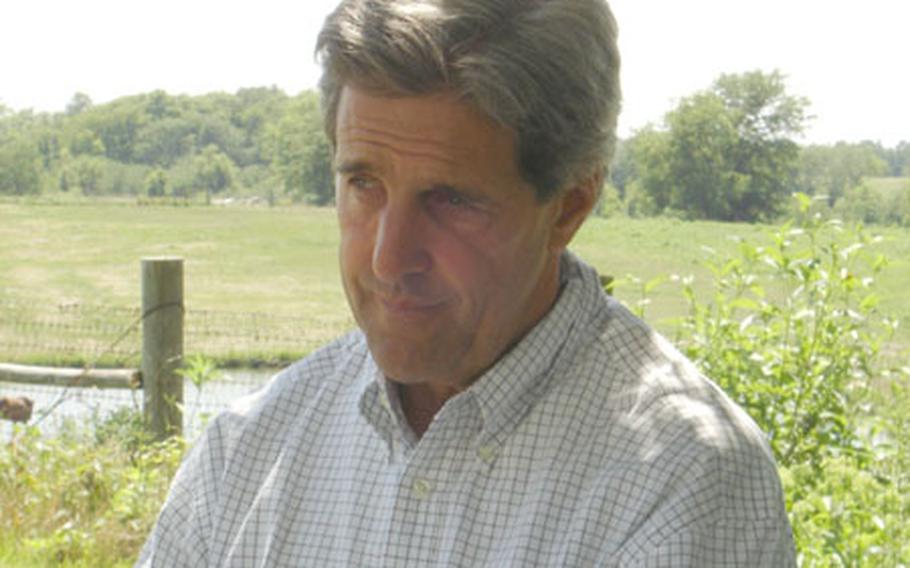 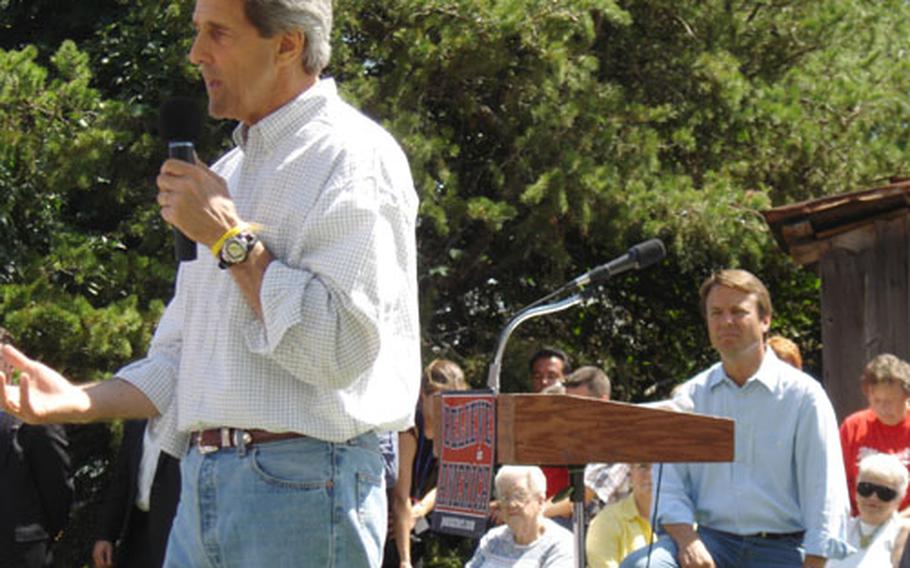 John Kerry and John Edwards spoke to supporters at a Friday rally in Smithville, Mo. After the event, Sen. Kerry sat down with Stripes&#39; Washington bureau chief, Pat Dickson, and talked about the war in Iraq, stresses on the military, and what he would do with the military as president.

Stripes: You said during your speech sir that never again would U.S. troops operate, or be hostage to a lousy energy policy --

Kerry: I think in the first war, their oil was a critical consideration, because Saddam Hussein&#8217;s intent was to take over the oil fields. Jim Baker said publicly that it had something to do with what we were doing.

Stripes: But our operations in Iraq right now, no?

Stripes: You&#8217;re speaking to half a million active duty guys that are overseas; that&#8217;s who Stars and Stripes prints for.

Kerry: Yes, I know. I remember it well.

Stripes: The charge is out there, that Republicans are much better suited to handle defense issues. How do you counter that?

Kerry: My record counters that, and my friends counter that. My message to the troops over there? Help is on the way. Help is on the way in every respect. The Guard and the Reserves have been overstretched. [The Bush team] have conducted a back-door draft by the stop-loss provisions and the lengthy deployments. People have been overextended, and stretched too thin.

So I think our troops are at a greater risk than they had to be, and I think we have borne greater costs than we needed to. Furthermore, I have a plan for a Military Families Bill of Rights. My Military Family Bill of Rights will provide greater guarantees with respect to education, health care, deployment schedules, and pay.

So, I will do a better job protecting our troops, and a better job of making America safe than George Bush has.

There&#8217;s a great tradition of Democratic presidents who&#8217;ve led us in war. From Franklin Roosevelt and Woodrow Wilson, to President Kennedy &#8211; Bill Clinton who, managed to do Kosovo without any casualties at all.

Stripes: Tommy Franks has said in his new book that we should be in Iraq for three to five years &#8211; does that sound like a fair estimate to you?

Kerry: I think that that estimate depends on the success of my diplomacy. I will be more successful than George Bush, and I think any timetables now will depend on a new president, and a new credibility to re-create the relationships that this administration has broken.

Stripes: As a hypothetical, what happens if these old allies don&#8217;t come back? Or if they don&#8217;t want to go into Iraq in substantial numbers?

Kerry: Well, I&#8217;m not going to deal with hypotheticals. This is not a hypothetical. I&#8217;m working on knowledge I have, indicated to me from colleagues in the Senate who&#8217;ve traveled abroad and talked to people. I know the power of my own diplomacy and I believe, and I&#8217;m confident to say I can do a better job of bringing people to the table and reducing the burden on American troops. I know I can do it.

Stripes: So you can guarantee that we&#8217;ll have a substantially reduced force within a year? Two years?

Stripes: Would you put more Americans in there first? While your diplomacy works?

Stripes: &#8230; and it will be a lot of cost, but we have a readership of young troops in the field right now and I think they want to know what you&#8217;re going to do immediately to help their situation.

Kerry: The very first thing I will do, as soon as I&#8217;m sworn in as president &#8211; I&#8217;ll even begin the process before that, but I will not be empowered to do anything until I take office, is to convene an international conference, with the Europeans co-chairing, and the Arab countries co-chairing. And we will bring people back to the table they used to be at, before this administration proceeded unilaterally.

And I will provide new credibility where this president doesn&#8217;t have any.

Look, there&#8217;s a bottom line here: Nations respond according to some of their own political realities. Leaders in other countries now have a very price &#8230; to deal with this administration. We need a new president who can change the climate for those leaders. I can do that. With a high commissioner, who helps manage the involvement of these other countries, so it&#8217;s not an American occupation. And that will greatly reduce the risk to the soldiers in Iraq.

Stripes: The diplomacy that you hope to embark on &#8211; people say that the Democratic bench is a little weaker than the Republican bench. Do you feel that you have the talent &#8211;

They said the flowers would be strewn in the streets. Everything &#8211; you know, there&#8217;d be no problem afterward, they said that we&#8217;d have a legitimate coalition at some point. You know, I think these guys have let the troops down, personally.

And I think that our bench is very, very deep. You know, we have people like [former Georgia senator] Sam Nunn, people like [former Maine senator who brokered peace negotiations in Northern Ireland] George Mitchell, people like [former assistant secretary of state] Dick Holbrooke, people, you know, Joe Biden in the Senate. Others. Carl Levin, from the [Senate] Armed Services Committee. We have a very deep bench, a very experienced bench, who did a better job in the 1990s, of both fighting a war and making these decisions to protect the military.

And no one should forget that it was their military that initially went into Iraq and succeeded in doing what it did without one change from this administration. This administration has gotten [the military] deeper and deeper into a hole, and I can get &#8217;em out.

And I will strengthen the military. I will strengthen the military with the weapons I&#8217;m going to procure. With the availability to all the troops of the training we&#8217;re gonna provide &#8211; we&#8217;re not going to send troops to do jobs they haven&#8217;t been trained for. This is a disgrace, what people have been put through. People have been sent over there without the training necessary, with too little training. We even have our top trainers who have been deployed to go over there rather than be where they can train people. I think that&#8217;s movement toward a hollow military, and I&#8217;m told that equipment is in sore need of repair, the backup on maintenance is enormous &#8211; these guys are way overstretched.

Stripes: Would you reach across the aisle [to the Republican Party] for a secretary of defense?

Kerry: It&#8217;s very possible. I&#8217;m not committing to it, but it&#8217;s entirely possible. But I&#8217;ll tell you this: I will have it a prerequisite that the secretary of defense work effectively with the professional military, listens to their advice, and if you&#8217;re going to disagree with it, is respectful in the way we DO disagree with it, that we don&#8217;t ruin careers over advice honestly spoken in an honest way to a Congressional committee. And I think the military deserves an invitation of their advice, not a chilling effect to it.

Stripes: In the transformation plan outlined by [Defense] Secretary [Donald] Rumsfeld and others in the administration, they&#8217;re talking about moving troops out of Europe east, south into Eastern Europe and Africa. Smaller lily-pad bases, closer to the hot spots. Would you continue that trend?

Kerry: I&#8217;m going to get a re-evaluation when I get in. I&#8217;m not going to start moving troops around, hypothetically. What I&#8217;ve called for is to stop the BRAC (Base Realignment And Closure) process temporarily, I wanna make certain that we are re-evaluating precisely what America&#8217;s military needs are in this new structure. I&#8217;ll bring the best experts in the country together &#8211; Republican and Democrat alike &#8211; in order to determine what the best platform is for the American military.

And my hope is, that with my diplomacy, we can be more effective with North Korea. We might be able to reduce the deployment in that part of the world, that&#8217;s been much too similar for 50 years now, and I hope that we can do a better job ultimately with Europe.

But I can&#8217;t tell you I&#8217;m going to start spreading pods around individually, at this point in time. I want my people in there, I want my diplomacy to begin to take hold, I want a better assessment of what the lay of the land is going to be with a new president.

Stripes:You mentioned South Korea &#8211; part of the 2nd Infantry Division is headed over to Iraq right now. And there are rumors that these guys might be rotating back to the United States rather then going back to South Korea. Do you support an overall reduction in troops in South Korea?

Kerry: As an ultimate goal, but not as an immediate step.

And I think it&#8217;s premature to start going into a sort of automatic post-Cold War base-closing process when we&#8217;re in a war with very hot spots around the world that may demand more from us, not less. So, I think that wisdom and prudence requires us to proceed cautiously. I want my evaluation, based on my presidency, to take place before anything is shut.

Stripes: Let&#8217;s move over to pay issues. The civilian-military pay gap right now is about 5 percent, down from 13 percent in 1999. The law is that GIs should get half a percent more than their civilian counterparts in the federal government. Would you continue the plus-0.5 percent raise &#8211;

Stripes: So you would target raises.

Stripes: What about Serviceman&#8217;s Group Life Insurance? Guys are paying a nominal amount, but for guys in combat areas --

Kerry: You ought to give it to them automatic [without monthly payments into the system] and it ought to be raised.

Kerry: You bet. Why not? I mean, you&#8217;re looking at, if you&#8217;re running a wise policy, and you&#8217;re in a limited war situation, which I hope to very much be in, it&#8217;s not asking too much for the United States of America to guarantee an appropriate level of life insurance, cost-free, to those who are willing to put themselves on the line. And I think that anything less is almost an insult.

Stripes: Family Separation Allowance. You said that the Bush team wanted to cut it. [The DOD plan was to roll back increases in FSA and Imminent Danger Pay, but increase Hardship Duty Pay to compensate for the drop, so only people in combat areas would see no reduction.] You want to keep [FSA] for everyone deployed over 30 days?

Stripes: Any plan for tax breaks for people who are deployed?

Stripes: Would you encourage states to change tax forms? To have check-boxes that &#8211;

Kerry: I think it&#8217;d be great; a lot of states have done that. I also think that there should be a simplification for those people.

Stripes: Of the tax process? For filling out forms?

I think that the folks who are deployed would be better served by a commander in chief who knows what it means to be deployed.