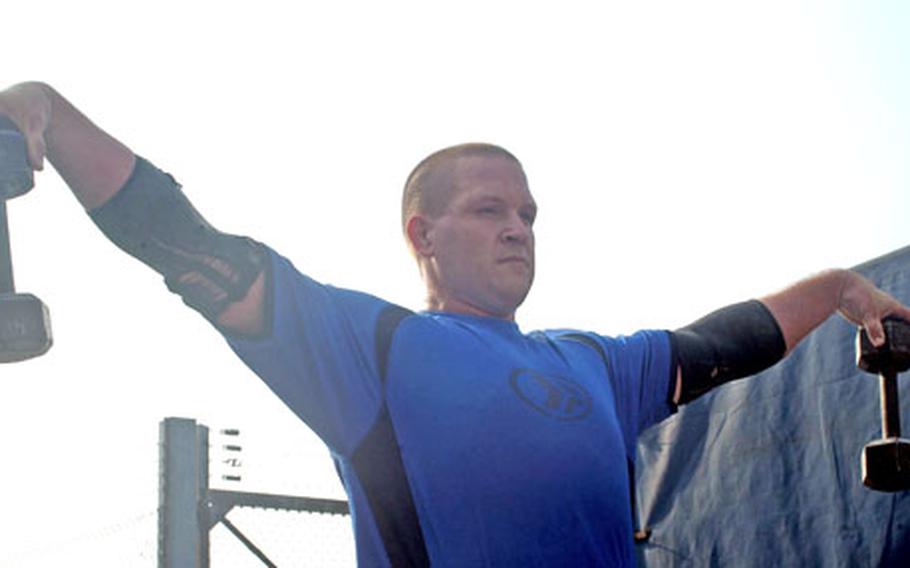 DARMSTADT, Germany &#8212; They were all undeniably strong men. Their muscles were many and bulging, and they all looked cool wearing that wide leather belt that helps prevent hernias. But who was The Strongman?

On Saturday at the Cambrai-Fritsch Kaserne&#8217;s Strong Man competition, it wasn&#8217;t all that serious a question.

The man declined. Wisely, some might say. Because who really wants to carry 200 pounds of concrete for several hundred feet? Who wants to lift an empty &#8212; but still very heavy &#8212; beer keg over his head repeatedly for 90 seconds, or hold dumbbells out from his sides until he wants to throw up, or flip a 300-plus pound tire over and over until he just can&#8217;t flip it anymore?

Jacobson, 31, company commander for the Warrior Preparation Center in Kaiserslautern, and, at 185 pounds, the sole competitor in the lightweight division, had come to Darmstadt with his wife and baby to watch friends competing in Sunday&#8217;s bodybuilding event.

Not only that, he was already a winner. But still, he was taking a chance. In a strongman competition, Morgan said, &#8220;You can embarrass yourself.&#8221;

Rounding out the competition were two heavyweight contenders. Air Force Capt. Mark Peters of the 24th Intelligence Squadron at Ramstein Air Base was by far the most experienced. He&#8217;d competed in strongman competitions in the U.S., he said, as well as Germany and Switzerland. At 31, and weighing 234 pounds, Peters said he preferred these sorts of competitions to straight powerlifting.

Sgt. Jay Robinson of USAG Hohenfels was the third competitor and at 28 the youngest. Robinson, too, had entered on sort of a whim, but according to his cheering section he was a 228-pound &#8220;workoutaholic&#8221; who logged at least two hours a day, every day, in the gym and on the running track.

Actually, though, he did. Also the Crucifix &#8212; holding dumbbells by their ends out to the side until the pain became unbearable &#8212; the eponymous Tire Flip, and Keg Press and a weird event with a wheelbarrow. All painful. All twice. All done without embarrassment by all three.

In the end, they all won. Peters, Robinson and Jacobson all were awarded plaques, although if you were counting, the winner was Peters in the heavyweight class, with Robinson coming in second in that class, and Jacobson, who had bested Robinson in some categories, first in the lightweight class.