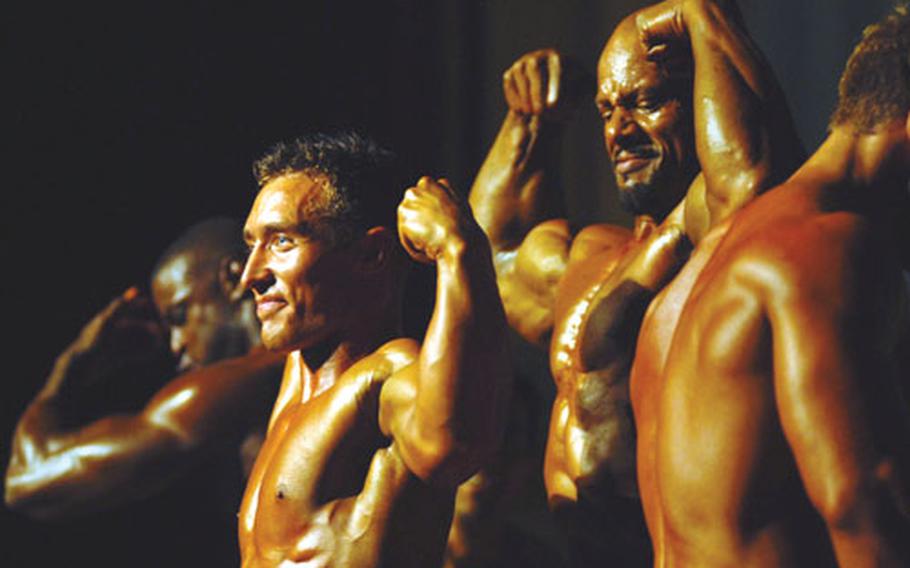 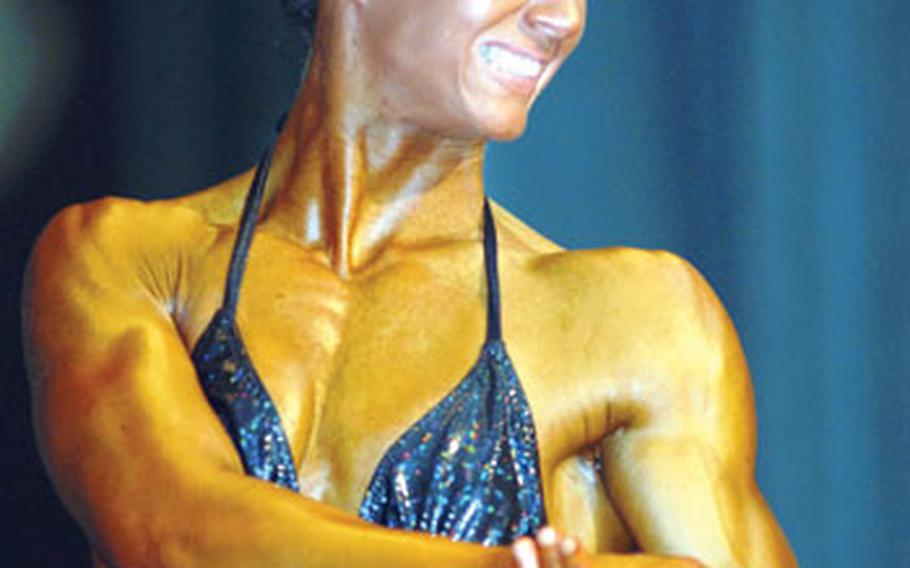 KADENA AIR BASE, Okinawa &#8212; All the months of training, weight lifting and dieting are done. But as a bodybuilder gets ready to compete, preparation still rules the day.

Crunching a few final arm curls to get the blood circulating, fine-tuning the 90-second music and pose presentation, choosing a tanning lotion and body oil dominate the hours and minutes leading up to a competition.

"It gives you a better presence on stage," Brandon Caesar, 20, an airman first class assigned to Kadena, said an hour prior to the base&#8217;s 2nd Pacific Muscle Classic at Kadena&#8217;s Keystone Theater.

About 350 spectators filled Keystone to view 38 competitors. Roosevelt Moody and Shannon Thomas of Kadena won the men&#8217;s and women&#8217;s overall championship trophies as well as their own weight divisions.

What type of body agents to use can depend on everything from what the bodybuilder likes to what judges prefer, Caesar said. For example, some builders might prefer Dream Tan, which contains tanning agents and oil, or Pro Tan, which contains no oil; a builder might put on oil later.

"Most of us help each other out, check each other to see if the tanning agent isn&#8217;t streaked," he said. "Others are in their own little world."

Tanning agents may produce a bit of discomfort for those trying it for the first time. "It feels like an extra layer of skin," Caesar said. "Once you&#8217;re used to it, you really don&#8217;t notice."

Some might don a tanning lotion just before a competition. Others will put it on a day or two before, waiting until the event to put on oil.

"It brings out the body&#8217;s definitions. It helps the muscles and veins stand out more," said 42-year-old Marine Sgt. Maj. Ronnie Harrison of Futenma Air Station.

Once all that&#8217;s done, mental preparation follows. "You get into your zone," Harrison said. "If you focus on the show, especially if it&#8217;s your first time, you become stressed. Relax. Listen to music. Watch a favorite comedy. Keep yourself comfortable."

"All the work is done in the morning. Nighttime is time to put on a show for the crowd," said Marine 1st Sgt. Nicole Freres of Camp Kinser about the morning mandatory poses and the evening show.

Some amount of showmanship goes into the evening portion, Freres said.

"Bodybuilding is very vain," she said. "Yes, you have to have an ego. To the crowd, your body is awesome. You feel like a million dollars out there. The music pumps up the showmanship and helps you flex better."

"You have to believe in yourself, give 100 percent and do the best you can," said Moody, whose title was his first in three years of trying.

"You put in all those hours in the gym, dieting and it all comes down to the judges. Today, it happened to fall my way. Hard work, dedication, getting up at 5 a.m.; it finally paid off."

So, how did Moody plan to celebrate his triumph?