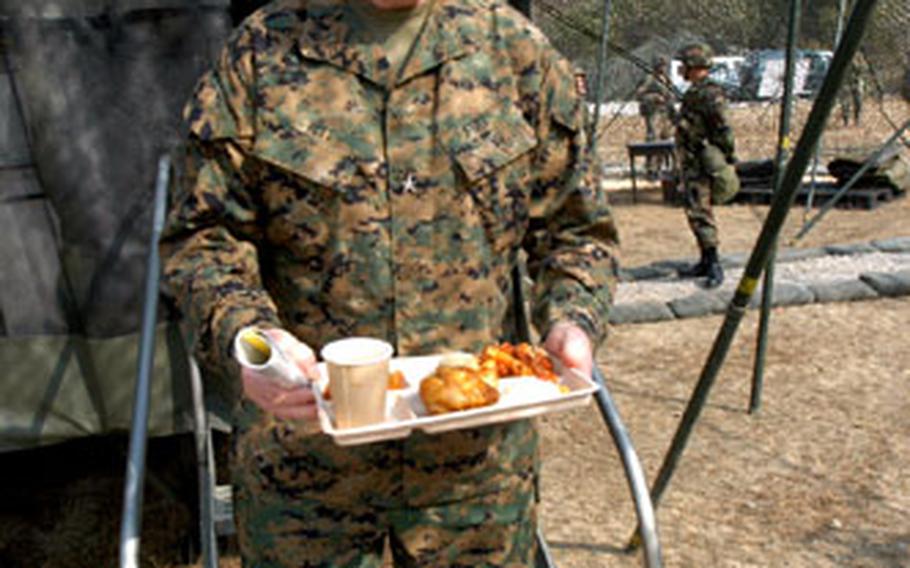 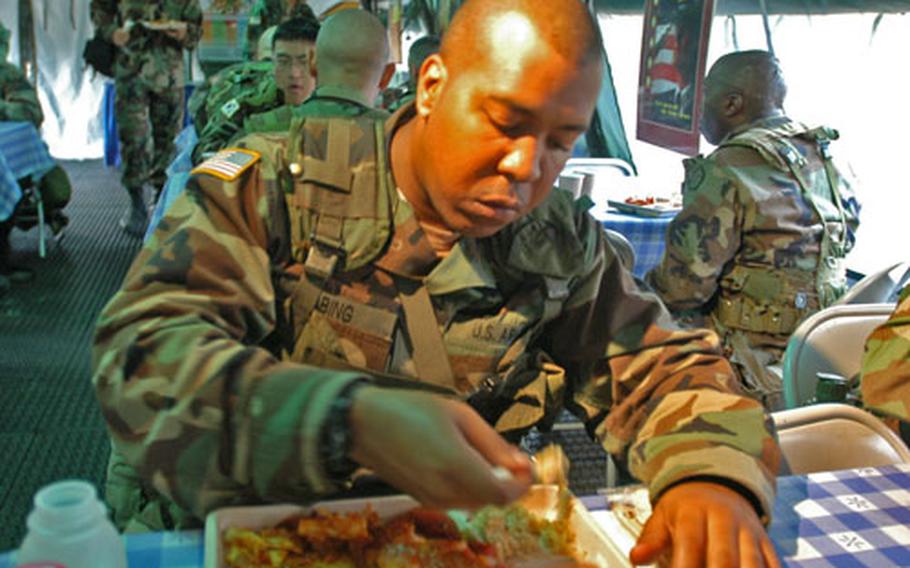 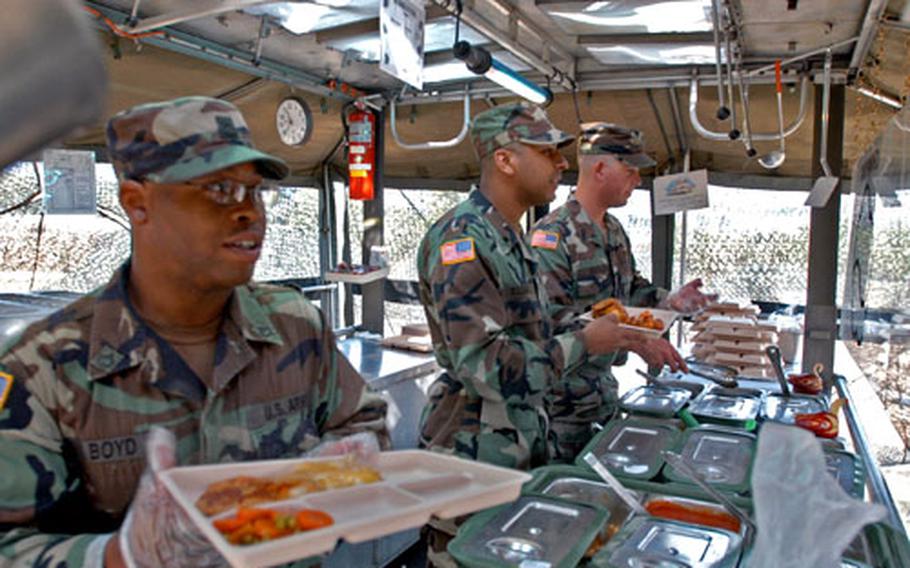 NORTH STAR RANGE, South Korea &#8212; A tasty breakfast or lunch can be the highlight of the day for a hungry soldier in the field.

For those lucky enough to be fed by the 501st Corps Support Group, it might be the best meal they&#8217;ll have in the military.

On Wednesday, 37 soldiers from the 501st competed at North Star Range in the Philip A. Connelly Program &#8212; a worldwide competition. The 501st soldiers already are the reigning 8th Army field kitchen champions.

In preparation for the contest, the soldiers built a small firebase at the range, complete with a wire perimeter, armed guards, sleeping quarters, latrines, a dining tent and field kitchen.

Command Sgt. Maj. Norman Carter, of the 19th Theater Support Command, said the soldiers had to prepare two meals for the contest: breakfast and lunch.

&#8220;They are evaluated on how well they use group rations to be creative and enhance the menus,&#8221; he said.

Then, with the sound of gunfire from the range in the background, six soldiers began to prepare meals under the watchful eye of three assessors &#8212; Sgt. Maj. Tom Munson and Chief Warrant Officer Arnoldo Montiel from the U.S. Army Quartermaster Center and School at Fort Lee, Va., and civilian hospitality consultant Art Ritt.

Munson said the 501st soldiers&#8217; efforts would be judged against work by units from Germany; Hawaii; Fort Bragg, N.C.; and Fort Bliss, Texas.

The Connelly competition is one way the Army has worked to improve the quality of soldiers&#8217; food over the years, said Munson, who remembers when typical Army meals consisted of two types of meat, two starches and two vegetables.

&#8220;In the field, you don&#8217;t have all the equipment and ingredients you are used to in the dining facility, such as dishwashing equipment,&#8221; he said. &#8220;The challenge is to do everything with very few people in a small operation and still put out a quality product.&#8221;

During the Connelly competition, assessors look at how units work as a team, sanitation, food production, quality of food, paperwork, maintenance and command support, he said.

Pfc. Kenyaro Boyd, 31, of Albany, Ga., compared the teamwork required by the competition to playing a game of football.

&#8220;I know what you have to do at the last moment to get a touchdown. We have all been together for five months so we know each other&#8217;s moves,&#8221; said Boyd, who hopes to open a soul food and seafood restaurant one day.

Another soldier involved in the contest, the 595th Maintenance Company&#8217;s Spc. Francisco Elias, 24, of Puerto Rico, said bringing people with different backgrounds and cultures together as a group was the hardest part of working in a field kitchen.

Of course, the real test of a field kitchen is the taste of the food that comes out of it.

Headquarters Headquarters Company, 501st CSG soldier Pfc. Taeon Bing, 22, of Washington, D.C., was one of several soldiers tasked with eating the meals produced for the competition.

&#8220;When you are in the field and training, having a good meal just brings up the morale. You feel like you can do more and concentrate better,&#8221; said Bing.

&#8220;During basic training we had powdered eggs that were not done all the way. I guess they didn&#8217;t add enough water. They were the worst things I had ever eaten in my life,&#8221; he said.

So how did the lunch the 501st prepared for the contest compare?