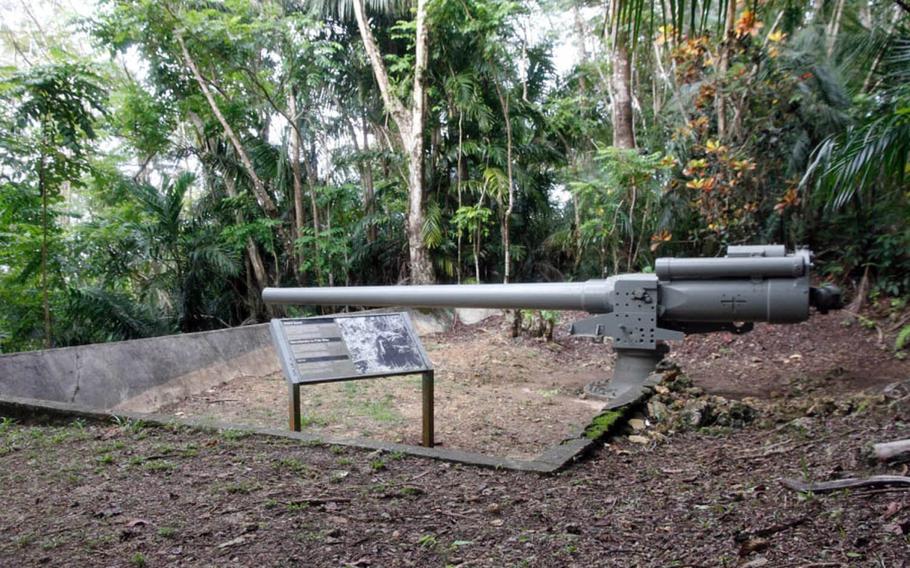 A Japanese canon stands on a Guam mountainside and is now part of a National Park Service display of World War II artifacts. Local Guam residents were forced to help build this and other defense emplacements in advance of the anticipated invasion by American forces in 1944. (Wyatt Olson/Stars and Stripes)

Living survivors of the Japanese occupation of Guam during World War II have one year to file a claim for compensation if they suffered rape, injury, forced labor, internment or flight to evade imprisonment during that period.

The Guam War Claims Program on Tuesday began officially accepting the claims of war victims, which also extends to the living spouses, children or parents of individuals killed during the Japanese occupation of Guam from December 1941 to August 1944.

Also included are claims arising from the American military forces that liberated Guam after 20 days of ferocious battle.

Compensation is based upon what survivors endured.

A lump sum of $25,000 is to be divided among living descendants of a person killed during the occupation.

Finding a funding source for approved claims, however, remains an unresolved issue, Rep. Madeleine Bordallo, who represents the U.S. territory in Congress, said in a statement Monday.

“I continue to work with my colleagues on an alternative funding solution that will hold Guam’s treasury harmless, but it is important to remember that the law does ensure that our [elderly] will receive their claim,” she said.

The first two years of Japanese occupation were not easy for the native Chamorro people, but life became extremely harsh for them by early 1944 as the occupying forces prepared for an expected invasion by America.

Social activities were banned, schools were closed and everyone older than 12 was forced to work on defenses, such as mountainside cannon batteries and shoreline pillboxes. Some Chamorro were executed after completing such work, and thousands of others were marched to camps deep in the island’s central jungle.

More than 1,100 Guam residents were killed during the Japanese occupation, according to the War in the Pacific National Historical Park.

Claim forms, in English and Chamorro, can be found at www.justice.gov/fcsc.

No additional documentation is required when filing the form, but claimants can submit supporting data if they wish.

The claim form must be signed and notarized and filed before June 20, 2018.