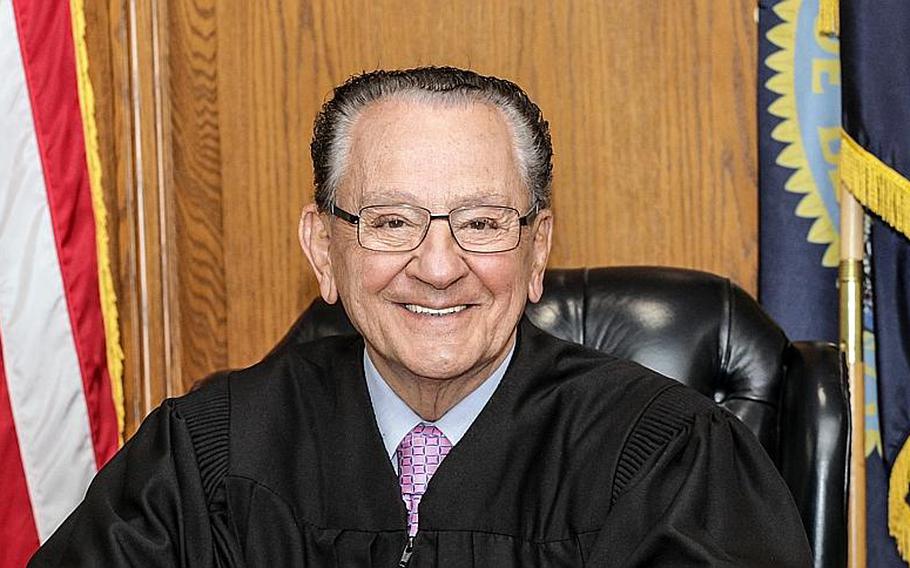 A Vietnam veteran with white hair and a bushy gray mustache recently stood before a Rhode Island judge and answered to a parking ticket.

“I want to plead guilty with an explanation, sir,” he said in a thick New England accent.

Judge Frank Caprio, 82, listened patiently as the man read a prepared statement about the difficult parking situation near Providence’s Veterans Affairs hospital. He said there’s nowhere to park, and he and other vets had for years left their cars on a nearby street with no problems, figuring police were giving them a break.

After learning that the man served in the Army and spent a year in Vietnam, Caprio explained the delicate balancing act judges face between enforcing the law and showing compassion for veterans who get $100 parking tickets while trying to get medical care.

He then thanked the man for his service and dismissed the case.

Short videos of encounters like the one above of Caprio’s empathetic rulings — for veterans and civilians alike — have been spreading across the internet like wildfire, garnering more than 1.7 billion views worldwide. That popularity has led to a nationally syndicated television show called “Caught in Providence” broadcast in 186 cities across the United States.

“The smallest thing can change someone’s life,” Caprio recently told Stars and Stripes in a telephone interview from his home in Rhode Island. “[My father’s] mantra was help people when you can. We were taught in life that it’s not enough to climb the ladder of success.” You have to lead down the ladder “so others can follow in your footsteps.”

Caprio — a first-generation American whose father immigrated from Italy at age 12 — is a veteran himself. He joined the Army Reserve in 1954 at the recommendation of his brother, who was also a soldier. Caprio, who served as a combat engineer, said the lessons he learned in basic training laid the groundwork for the judge he was to become.

“I was only 17 when I joined,” he said. “I was in basic and next thing I know I have someone yelling at me. It helped me orient my compass. There are rules, you follow them, and you respect authority.”

Caprio said his compassion for others was learned from his parents, and it especially applies to those who served their country.

“I have a particular affinity for all veterans,” he said. “But especially those who served in Vietnam. I remember how the vets were adored in World War II, and how they were scorned when they came home from ‘Nam. It’s a sad chapter in our history.”

During a speeding-ticket case, a man named Elmer — who later said he served 16 months in Vietnam — walked into Caprio’s courtroom with a cane. He had been in a car accident a few days before and told the judge he didn’t see the speed-limit sign and was having a bad day because of back pain.

Caprio asked Elmer if he was a veteran after complimenting him on his bearing and demeanor. After the two reminisced about the “raw deal” Vietnam veterans faced, the ticket was dismissed, and the judge thanked him for his service.

Caprio said he wants veterans to share their stories with the world, so that others will know the meaning of sacrifice, the importance of the American dream and that one person – no matter what their background – can be successful and have an impact on society.

“I think veterans have unique experiences, especially those who have been overseas in combat,” he said. “I love listening to them. Many vets don’t like to talk. They are very modest but sharing that sense of patriotism in invaluable.

“I think vets should speak in schools,” he added. “It gives students a perspective they might not get otherwise. This is a great country; it’s worth fighting for.”