Company to offer Americans a chance to own in Germany 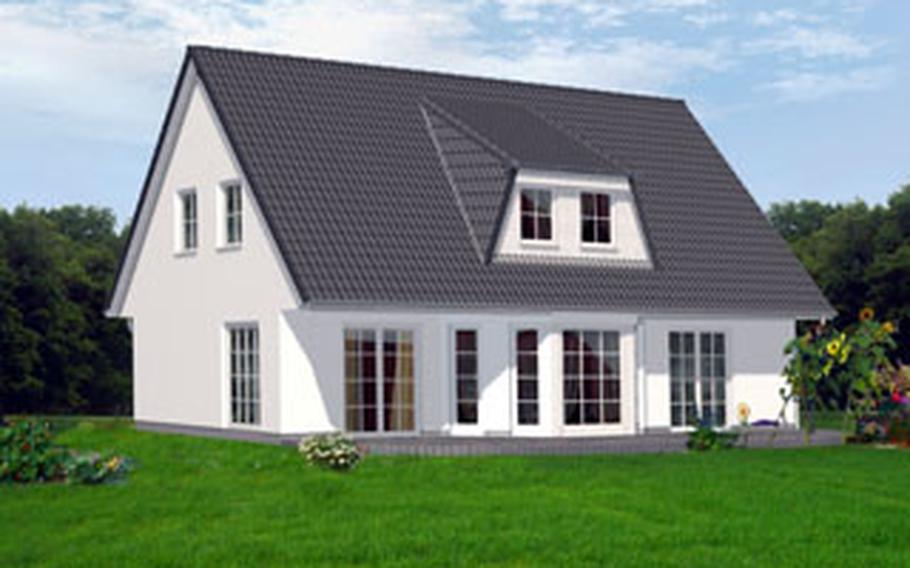 An artist&#39;s rendering of a four-bedroom house that Germany company VKB Vetter is offering to build for Americans on a rent-to-buy option near Grafenwöhr, Germany. (Photo courtesy of VKB Vetter)

The company, VKB Vetter, recently advertised the homes in the on-post Morale, Welfare and Recreation magazine, Bavarian American. The homes take 12 to 16 weeks to build, but customers do not start paying rent until they move in, VKB spokeswoman Ebru Choice said.

Large numbers of civilians are expected to arrive at Grafenw&#246;hr over the next few years, along with thousands of soldiers and family members, as the Army moves to establish a support brigade at the training area.

Late last year, U.S. Army Garrison Grafenw&#246;hr&#8217;s housing office ditched a plan to house new arrivals within a 30-minute drive of post and is now offering troops homes as far as 45 minutes away. Civilians moving to Grafenw&#246;hr have reported long and frustrating searches for off-post housing.

There are 35 house designs from which to choose and about 200 lots available within about 12 miles of Grafenw&#246;hr and Vilseck, according to the advertisement.

Choice said rent-to-buy is a good option for people who receive living quarters allowance and plan to stay in Germany for three years or more.

U.S. personnel who receive that allowance can use the money to buy a home. Each year, personnel are eligible to receive up to 10 percent of what they pay for the home and also can claim the cost of utilities in their living quarters allowance, according to the State Department&#8217;s Office of Allowances Web site.

People who rent-to-buy must pay a sign-up fee of 20,000 to 30,000 euros. If they want to move out any time after three years they can sell the house or give three months&#8217; notice, sign the house over to a German housing association and collect their sign-up fee and about 10 percent of the rent they have paid, she said.

Nate Atwood, a contractor at Camp Aachen in Grafenw&#246;hr said despite the chance to own a home, he probably wouldn&#8217;t take part in the program. Atwood, who currently pays 1,100 euros a month in rent, said it sounds like too much of a hassle.

VKB will demonstrate construction of one of its house designs, an Icon prefabricated house, at Sorghof on March 26, Choice said.