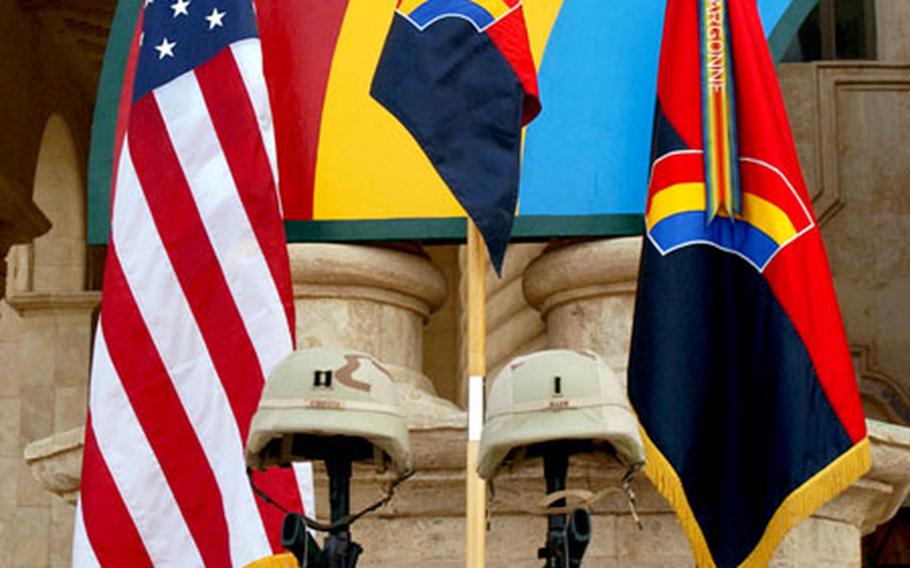 TIKRIT, Iraq &#8212; The room where the explosion hit has been rebuilt. The memorial ceremony here was more than a week ago. A new company commander has taken the reins.

Still, the New York National Guard members with Headquarters and Headquarters Company of the 42nd Infantry Division will worry and wait for the next few months to see what happens in a military criminal case that accuses one of their own of killing two of their officers.

Nearly three weeks ago, Capt. Phillip T. Esposito and 1st Lt. Louis E. Allen were killed in an incident near the company&#8217;s headquarters on Forward Operating Base Danger in Tikrit. Military officials first said the incident was an indirect fire attack, but later opened a criminal investigation.

Staff Sgt. Alberto B. Martinez, a supply sergeant from the same company, was charged with two counts of premeditated murder. The charges came only two days after a memorial service was held for Esposito and Allen in Tikrit.

Their deaths appear to be the first incidence in Iraq of &#8220;fragging,&#8221; military slang for the deliberate killing of a soldier&#8217;s own superior officers.

The mission is supplying the entire division&#8217;s 23,000 soldiers with armored trucks, uniforms, office supplies, ammunition and everything else the units need to operate.

Martinez, 37, was part of that process, and he helped soldiers get what they need here. Many saw him as a friend who went out of his way to do that, one soldier said last week.

Fearnside had helped to pick Esposito, 30, well over a year ago as the company commander. Willsey, who had worked with Esposito for years in the National Guard, seconded the choice.

Allen, 34, had arrived in Iraq just four days before he died. He had volunteered to come over and help this specific company, Willsey said.

Fearnside was on leave in New York when he first heard of the incident. He was scheduled to return the next day, and by the time he got back, it was clear that an investigation into the incident was under way.

A team of chaplains went to FOB Danger and lived with the company&#8217;s soldiers for a couple of days after the explosion, Willsey said. Counseling sessions continue to be available for all soldiers who need it, and their direct supervisors are watching to see who might need help dealing with the fallout from the deaths and the court proceedings, he said.

The company&#8217;s soldiers learned about the charges after the families of the soldiers involved, but before the media began reporting the latest development.

One of the division&#8217;s spokesmen, Maj. Richard Goldenberg, lived in the building where the explosion occurred.

&#8220;We&#8217;re a tight-knit family, the New York National Guard,&#8221; Goldenberg said. In some ways, he said, the charges brought a small sense of closure to the soldiers here and helped them grieve.

But, Goldenberg said, most soldiers still have two main questions: Why did it happen? And what will be the final outcome?

Fearnside knows his soldiers will pay close attention to news about the case. But he doesn&#8217;t want them to think this will be their legacy from their year spent in Iraq.

Still, there&#8217;s no question it will be hard. Willsey said he relied on advice he thinks Esposito would have given him.