Two trucks carrying concrete drive east toward Baghdad on a stretch of highway watched by Iraqi police and U.S. soldiers from Company C, 2nd Battalion, 7th Infantry Regiment. The Iraqi police run the checkpoints along the road while the Army stands watch in posts with a view, like this one at an overpass. (Teri Weaver / S&S)

Two trucks carrying concrete drive east toward Baghdad on a stretch of highway watched by Iraqi police and U.S. soldiers from Company C, 2nd Battalion, 7th Infantry Regiment. The Iraqi police run the checkpoints along the road while the Army stands watch in posts with a view, like this one at an overpass. (Teri Weaver / S&S) A local fuel station manager stands in front of his business, which looks more palatial than pit stop. On Sunday, three cars, including a Mercedes, had stopped to fill up. Business is good and safe, he said. His brother is an Iraqi policeman, and an Iraqi checkpoint is just outside his station on the main highway. (Teri Weaver / S&S) 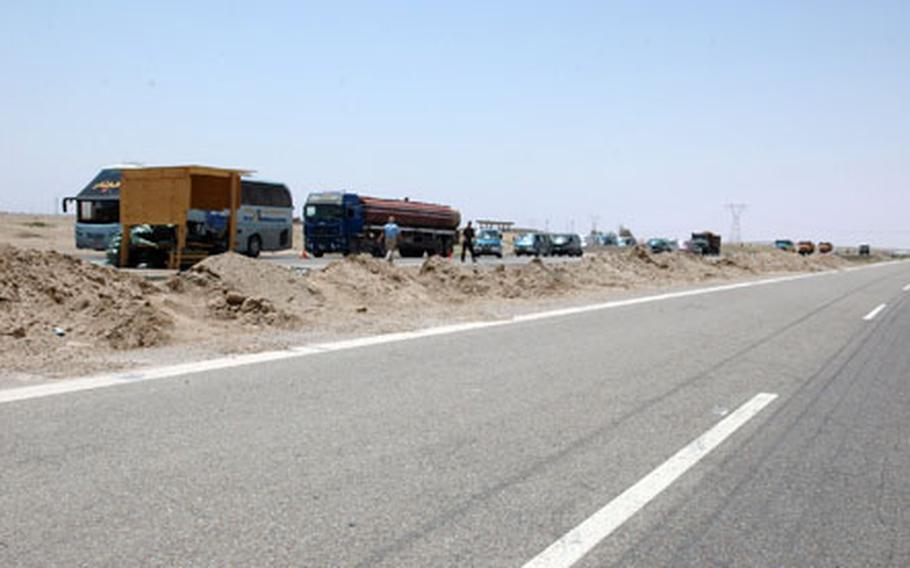 Trucks line up as Iraqi police check their drivers and cargo on the main highway that runs from Iraq&#39;s western border through Ramadi and into Baghdad. The Iraqi police, who are local to the area, do the inspections while the U.S. Army provides supplies and military support when needed. (Teri Weaver / S&S)

As the military and local police drive insurgents out of Ramadi and with the surge of thousands more troops in Baghdad, the soldiers with Company C know the insurgency is using more inventive ways to move its supplies of explosives and weapons.

Equally important, the soldiers say, are the local Iraqi police and security forces who watch the same stretch of road and inspect every car and tractor-trailer moving toward Baghdad. They live beside the road, relying on the American soldiers for water supplies and generator upkeep. Some of the Iraqi police wear uniforms; some have police badges that were printed on home computers.

Still, they have success. Recently they stopped two car bombs because they recognized that the drivers&#8217; behavior was odd. They shot both drivers before they detonated the bombs, according to U.S. troops.

At the checkpoints, the Iraqis work independent of the American forces. They lead their own searches for any clue to violence &#8212; bomb-making materials, tips from drivers on insurgency activity, and this week, any information on three 10th Mountain Division soldiers missing after an early-morning ambush outside of Baghdad.

The U.S. soldiers stay back from the individual checks. Instead, they patrol the highway in Humvees, interviewing the few business owners along the road, sharing and receiving tips with the local police. Along the way, they also stop to clear the lanes of tire shreds that might hinder traffic or prove opportune for hiding a roadside bomb.

They also live on the road in outposts that overlook overpasses and the fields that lie to the north and south. Groups of soldiers rotate to the outposts every five days. One lookout had an air-conditioned sleeping room, a fridge stocked with drinks, peanut butter, spreadable fudge and Asian hot sauce. And Scrabble. They spend hours watching Iraq&#8217;s economy &#8212; sheep, concrete, vegetables, fuel &#8212; roll by.

Deliberti usually rides with the groups on patrol, visiting the outposts for updates on supplies and checking in with the few local businesses on the highway.

The gas station manager runs a one-pump station. He says he gets about 10,000 liters of fuel delivered every two months, hardly enough for the busy thoroughfare. His brother was kidnapped by terrorists, he says, and he asks the Army&#8217;s help.

His business is shrinking for another reason: A man who once ran the nearby truck stop restaurant recently closed his business because he joined the local police department.

A few minutes down the road, on the opposite side, another gas station is enjoying more business. Three cars were stopped for gas on a recent afternoon, and the manager invited the soldiers to stay for lunch inside his station, a mini-palace on the side of the highway.

His brother is an Iraqi police officer, and he pointed to the checkpoint just outside his station. The soldiers plan to move that checkpoint further east to a more secure area, something they know will cause concern.

For now, however, both station managers report their area is calm.