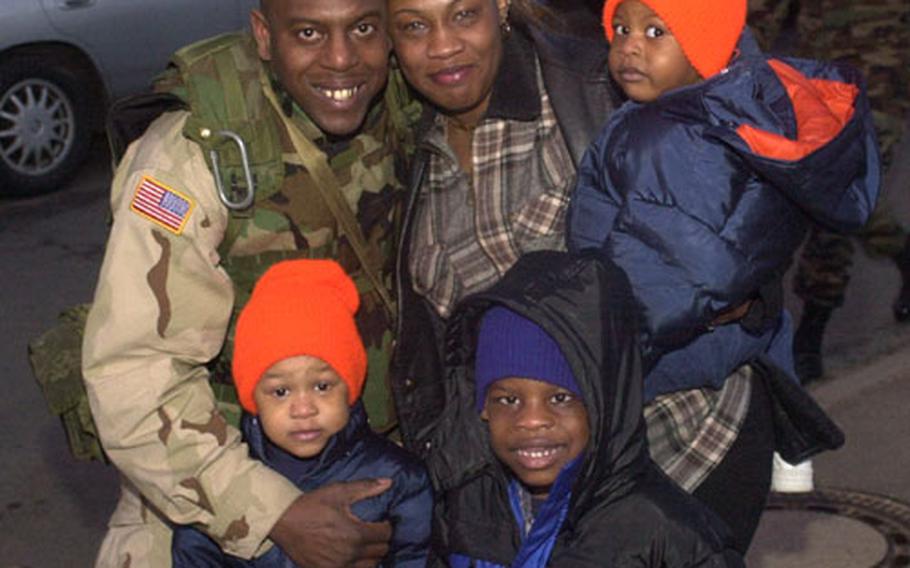 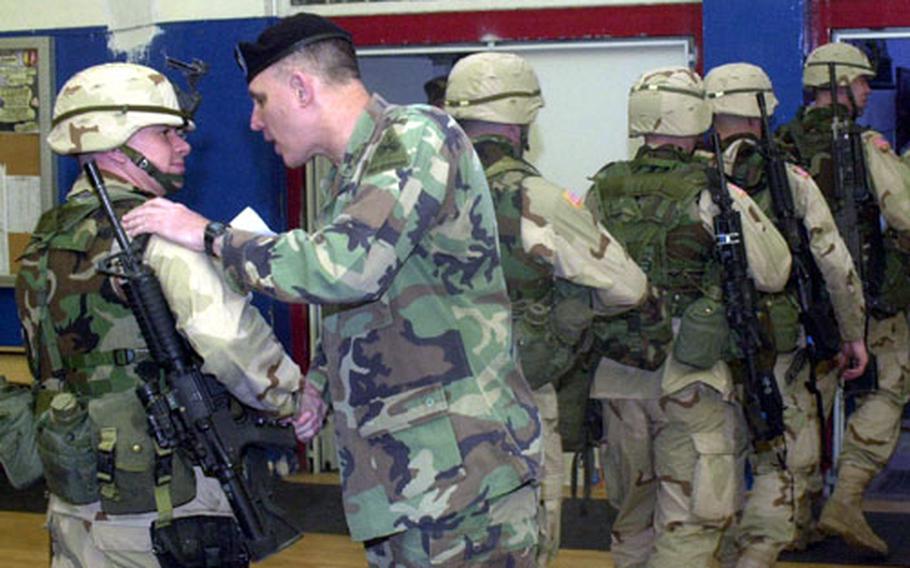 Col. John D. Johnson had a few words for 1st Sgt. Mark Lahan as Lahan and about 100 other soldiers from Company C, 2nd Battalion, 6th Infantry Brigade, boarded buses Tuesday morning for Ramstein Air Base on their way to war with Iraq. (Terry Boyd / S&S)

BAUMHOLDER, Germany &#8212; Valencia Patrick and her three boys have their farewells to Staff Sgt. James Patrick down to a fine art.

After tours in South Korea, Kosovo and Hungary, her husband is heading to &#8220;a U.S. Central Command Area of Responsibility,&#8221; according to Army officials. He is among the first soldiers deploying from Baumholder or the Weisbaden-based 1st Armored Division.

In a way, her husband already had left, Valencia Patrick said. With deployment pending to the Persian Gulf for a possible war with Iraq, Company C soldiers had been working a lot of hours.

Coming only a few hours after President Bush gave Saddam Hussein 48 hours to leave Iraq or face attack, the 6 a.m. ceremony Tuesday had a certain finality to it.

Company C is deploying &#8220;into an unforgiving environment &#8230; that will require iron discipline from every officer and soldier,&#8221; Maj. Gen. Ricardo Sanchez, 1st AD commander, said at the ceremony.

Some of the families took a bit of comfort knowing that the company, made up of Bradley fighting vehicle crews and mechanized infantry, will arrive in the Middle East well after the majority of the 250,000 American troops already in place.

What do family members say to soliders going in harm&#8217;s way?

&#8220;Say, &#8216;I love you, Daddy,&#8217;&#8221; Valencia Patrick coached her sons, Caleb, 2, Christion, 4, and Cameron, 6. As the children watched their father get on the bus to Ramstein Air Base and dangers unknown, Valencia Patrick summed up her ritual for the final few hours before a deployment.