Company A returns to Hohenfels from Iraq 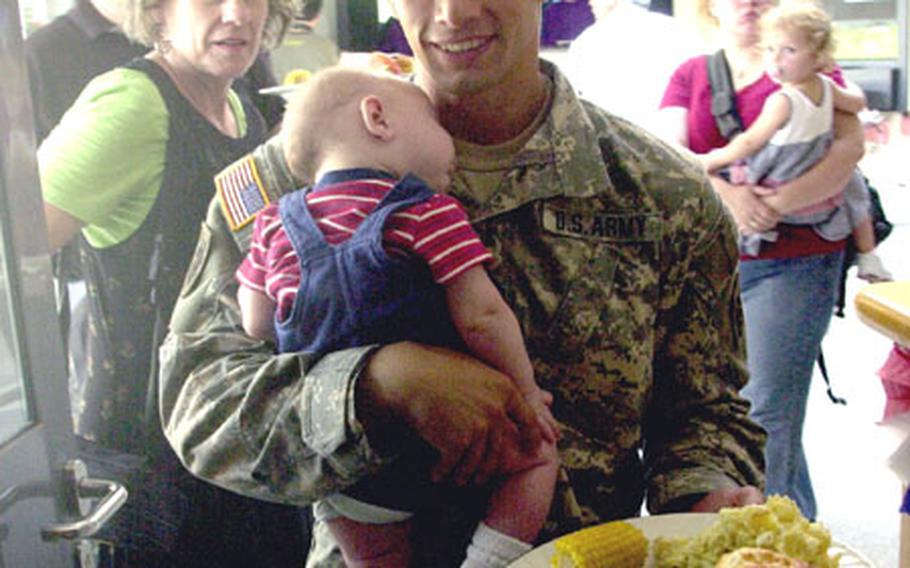 Company A, 1st Military Intelligence Battalion soldier Spc. Ben Smith, 25, carries his 3-month-old son, Hunter, who was born while his father was downrange, at a welcome home party Friday for the unit at Hohenfels, Germany. (Seth Robson / S&S)

HOHENFELS, Germany &#8212; They may be small but the unmanned aerial vehicles operated by Company A, 1st Military Intelligence Battalion flew some of the most important missions out of LSA Anaconda, Iraq, during an eight-month deployment.

Company A soldiers, who deployed in November, were welcomed home to Hohenfels on Friday with a ceremony and party.

Company A commander Capt. Richard Berry, 37, of Boston, said a hurdle his unit had to overcome in Iraq was the Air Force&#8217;s tendency to give larger aircraft priority on its runway at Logistics Support Area Anaconda.

&#8220;It was hard because sometimes we were not prioritized for runway usage. We were supporting troops in contact with the enemy and they would make us wait for a C-17 full of parts or another one going back empty. Our battalion worked it out with the Air Force so they understood what our mission was and that it was a priority,&#8221; he said.

Company A executive officer Capt. Trent Weston, 33, of Alexandria, Va., said 57 soldiers from the unit served in Iraq flying eight Hunter UAVs for a total of 2,300 hours. On daily missions the UAVs ranged up to 200 kilometers (over 120 miles) from base to insurgent hot spots such as Baghdad, Fallujah, Ramadi and Balad, he said.

One of the Company A soldiers at the welcome home party, Spc. Ben Smith, 25, proudly carried his 3-month-old son, Hunter, who was born while his father was downrange. Smith&#8217;s wife, Elizabeth, 24, and daughter Nevaeh, 2, also were at the celebration.

Smith, a UAV operator, said life at Anaconda was much improved from the early days of the Iraq occupation, when the base was a dusty collection of tents and bombed out buildings.

&#8220;There was grass in front of our battalion building, indoor showers and toilets, and we slept in bunk beds,&#8221; he said.

However, the base was mortared regularly by insurgents, said Smith, who was on his first mission to Iraq.

There were many times when the UAVs spotted insurgents at work, Smith said.

&#8220;We&#8217;d be looking through the cameras and see people doing terrorist-type activities like hiding stuff in weapons caches or alongside the road placing IEDs (improvised explosive devices),&#8221; he said.

Smith said he was looking forward to training with the unit&#8217;s new UAV, the MQ5B, which would arrive at Hohenfels soon.