Company A keeping watch in Afghanistan 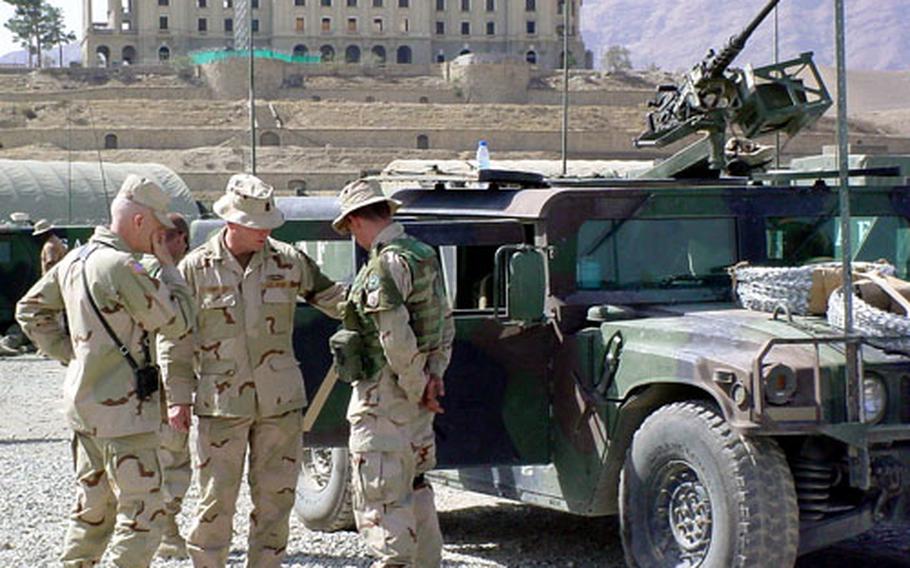 HOHENFELS, Germany &#8212; The company-sized element of opposing forces soldiers from the Combat Maneuver Training Center is nearly halfway through its three-month deployment to Afghanistan.

The soldiers from Company A, 1st Battalion, 4th Infantry Regiment were sent to Southeast Asia in September to help provide security for Afghanistan&#8217;s elections in October.

It was the first time the battalion had deployed in 60 years.

&#8220;It was important that they deployed there in time to familiarize themselves with [Kabul] before the election,&#8221; said Lt. Col. Randy Copeland, 1st Battalion, 4th Infantry Regiment commander.

As the opposing force at CMTC, the soldiers are a formidable foe to U.S. Army units in Europe that rotate through the training area.

Now, the soldiers from Company A are conducting the same types of missions they&#8217;ve helped countless U.S. soldiers in Europe prepare for.

The soldiers are the only U.S. combat forces assigned to NATO&#8217;s International Security Assistance Force in Afghanistan and serve as a quick reactionary force for ISAF, Copeland said.

They&#8217;ve proven themselves worthy of the task, he said.

Although is was the battalion&#8217;s first deployment in decades, the Company A family readiness group leader said life back home is running relatively normal.

&#8220;The community has been very supportive. The guys were well prepared before they deployed, and that eased the [spouses&#8217;] minds.

To ease everyone&#8217;s minds, the FRG gets weekly e-mail updates from the Company A commander, and Normand passes that on to the spouses.

The community also set up video teleconferencing capabilities for families to communicate with the soldiers.

Normand said the support from Copeland and Command Sgt. Maj. Michael Pickett has helped the spouses cope with the deployment.

Normand is pregnant with her third child, and Copeland brought her husband, Staff Sgt. Jeffrey Normand, home from Afghanistan to be with her during the delivery.