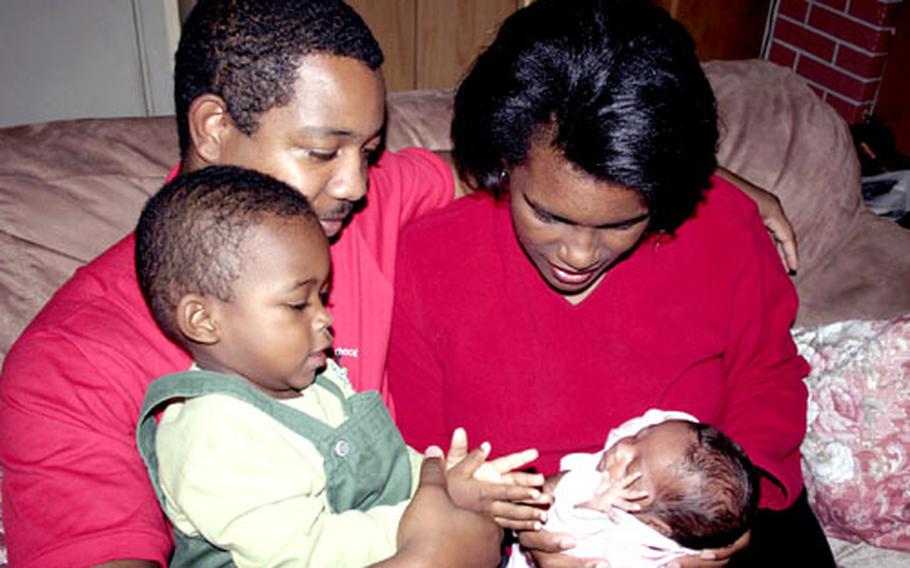 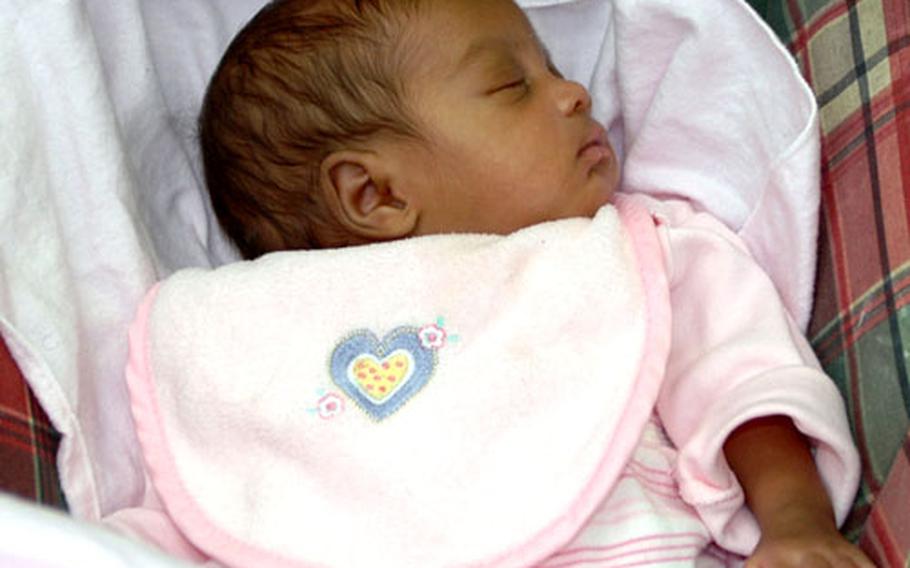 Little Sarah Anderson, nearly 2 months old, was born prematurely while her parents were staying at the Holiday Inn in Sasebo city just after the family had moved to Japan. (Greg Tyler / S&S)

When the labor began, Tamala and her husband, high school science teacher Glenn Anderson, 26, made it as far as the elevator before she had to return to the room. A hotel clerk summoned an ambulance, but the baby was waiting for no one.

Glenn was propelled into action, anxiously darting around the hotel room searching for clean towels and a pot in which to boil water, all while their son, 2-year-old Caleb, quietly watched the drama unfold.

&#8220;I was praying and praying,&#8221; Glenn, an Ernest J. King High School teacher, said Thursday while recalling the experience.

The delivery, just like the labor, was quick. So before the family from Greensboro, N.C., could learn the difference between arigato and sayonara, they&#8217;d ushered their second child, daughter Sarah, into the world.

Throughout, said Tamala, 27, she felt at peace about the situation, even though Sarah wasn&#8217;t due until Saturday.

Even so, premature babies &#8212; especially those born as early as Sarah &#8212; typically are quite small and usually lack fully developed lungs. Sarah weighed only about three pounds, but she quickly let out her first squall, soothing concerns about lung development.

After the delivery, an ambulance arrived and took Tamala and Sarah to nearby Sogo Hospital.

Sarah was born at about 4 pounds; the target weight at which hospitals will discharge premature infants is 4.85 pounds.

The Andersons&#8217; health insurance expired when Glenn resigned in North Carolina to accept the position with the Department of Defense Dependents Schools in Japan.

In the States, patients are accustomed to paying small percentages of health-care bills, with insurance paying the rest, or paying off balances with a payment plan. Glenn knew the new family health coverage would reimburse most of the costs eventually, but the hospital wanted the bill paid right away.

Nine thousand dollars was a chunk of change the family did not have, especially after absorbing those unavoidable costs that creep into a move from the United States to Japan.

The Andersons borrowed most of the money to pay the hospital and physicians, leaving them financially strained and concerned about paying debts and bills until Glenn&#8217;s payroll deposits began to arrive regularly.

Nina Howard, also a teacher at King, and her husband had served as sponsors to the Andersons as the family prepared for their new life at Sasebo. Howard said that when news spread through the school about the financial burden the Anderson family faced, donations of cash from faculty and others began to appear in her school mailbox.

&#8220;It is kind of weird because family members were thinking we were heading off to Japan to something better. Then, in no time, there I was calling and needing money. That was tough.&#8221;

On Thursday, Glenn and Tamala seemed sincerely humbled by the helping hands &#8212; and open wallets &#8212; the school and base communities extended.