Spc. Leonard Ybarra stands in the foreground of the Honor Guard as it renders a 21-gun salute following a memorial service at the community chapel on Grafenwöhr for Staff Sgt. Derek J. Farley, 24, who was killed in Afghanistan on Aug. 17. (Dan Blottenberger/Stars and Stripes)

Spc. Leonard Ybarra stands in the foreground of the Honor Guard as it renders a 21-gun salute following a memorial service at the community chapel on Grafenwöhr for Staff Sgt. Derek J. Farley, 24, who was killed in Afghanistan on Aug. 17. (Dan Blottenberger/Stars and Stripes) 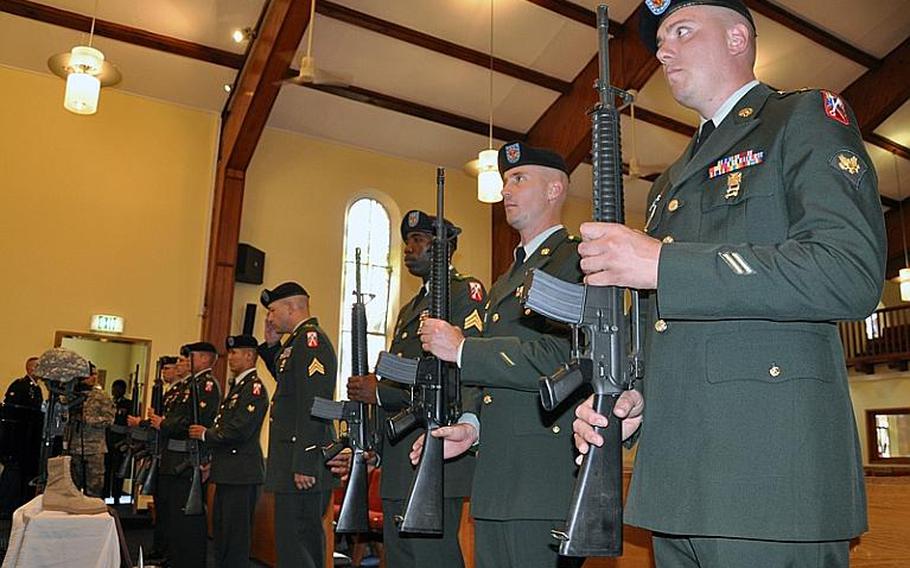 Soldiers of the 1st Inland Cargo Transfer Company Honor Guard pay their respects at a memorial service Thursday in Grafenwöhr to honor Staff Sgt. Derek J. Farley, 24, who was killed in Afghanistan Aug. 17 while trying to disarm a homemade bomb. (Dan Blottenberger/Stars and Stripes) 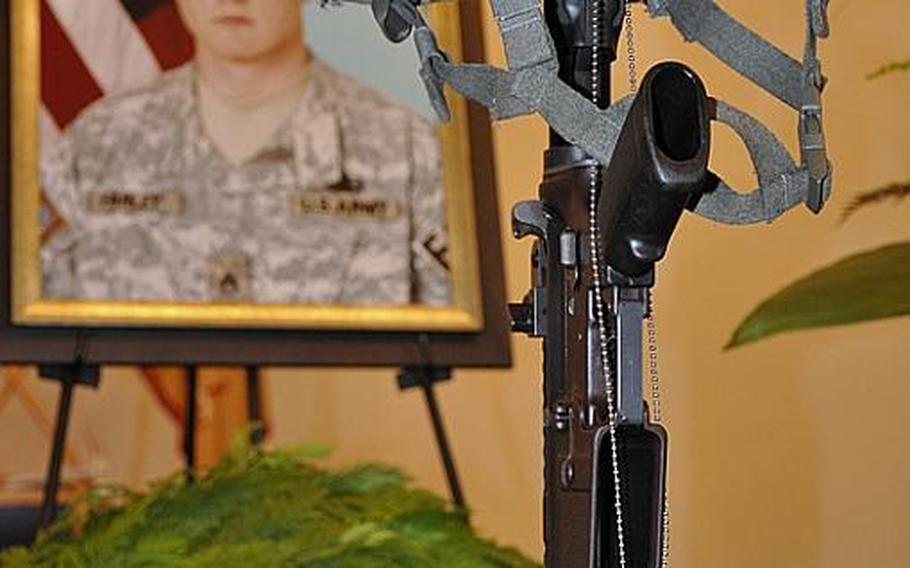 Staff Sgt. Derek J. Farley, 24, an EOD soldier was killed in Afghanistan on Aug. 17 when a makeshift bomb he was trying to disarm detonated. A memorial service was held in his honor at the Grafenwöhr chapel Thursday. (Dan Blottenberger/Stars and Stripes)

GRAFENW&Ouml;HR, Germany &mdash; Those who served with Staff Sgt. Derek Farley during the most nerve-wracking life-and-death moments in Afghanistan called him one of the Army&rsquo;s best explosive ordnance disposal technicians.

On Tuesday, inside the Grafenw&ouml;hr community chapel, they were among those gathered in celebration of his life and in the solemn acknowledgement that tragedy can befall even the most skilled.

Farley, 24, was killed Aug. 17 in Bala Boluk in the Farah province of Afghanistan while attempting to disarm a bomb, just weeks before he was scheduled to leave the combat zone.

The Nassau, N.Y., native was assigned to the 702nd EOD Company, based in Grafenw&ouml;hr. Farley was scheduled to return to Germany no later than Sept. 15, according to unit officials.

Farley deployed in September 2009, in charge of a three-man bomb disposal team covering a large area of operations in support of several hundred soldiers, said 1st Sgt. Alfred Rebara, of the 702nd.

&ldquo;This is probably the hardest thing I have had to deal with in my life &mdash; losing a best friend and an NCO at the same,&rdquo; Spc. Kyle McGuigan, a mechanic with the 702nd, said prior to the service.

&ldquo;You can&rsquo;t describe the 10,000 memories of him with a big German beer in hand just having fun,&rdquo; said Staff Sgt. Micah Bowman, a fellow EOD tech. &ldquo;He was just the life-of-the-party kind of dude.&rdquo;

When it comes to dealing with the deadliest of weapons in Iraq and Afghanistan, only the best are chosen for the job of defusing bombs, his fellow soldiers said.

&ldquo;You have to trust the man next to you because your life is on the line when you are working on a bomb,&rdquo; Bowman said. &ldquo;It&rsquo;s just really, really hard. It is like losing a family member.

&ldquo;He was just an outstanding EOD tech. Just the best bomb squad member &mdash; you have to have so much knowledge in this job.&rdquo;

&ldquo;I&rsquo;m 100 percent positive he was very passionate about EOD. He understood the risk; he accepted it,&rdquo; Hamilton said. &ldquo;If he were here right now, he probably would not have any problems with how things ended up.&rdquo;

Members of the unit said it would be difficult to replace the soldier they lost.

&ldquo;I know in my heart that he did the right thing, he knew what he was doing. ... Sometimes your number is up,&rdquo; Bowman said.

Farley is survived by his parents, Kenneth and Carrie, and brother, Dylan, according to the Defense Department.