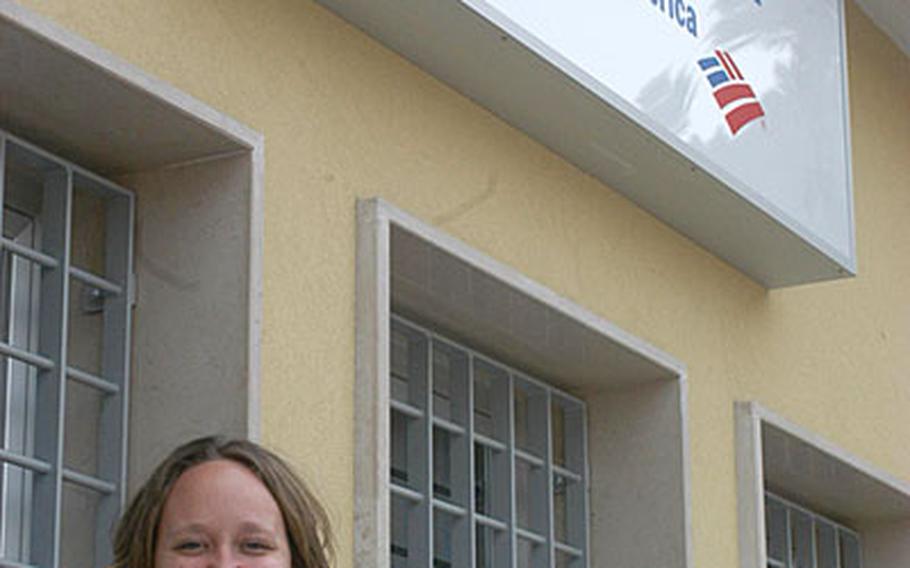 Shannon Studders is branch manager of the Community Bank office scheduled to open Feb. 8 in Vicenza. Community Bank has about 100 branches around the globe, but this will be the first one in Italy. Five or six others are scheduled. (Photo by Kent Harris / S&S)

VICENZA, Italy &#8212; American military communities around the globe have a lot of common elements, like schools, exchanges, commissaries and post offices.

But personnel stationed in Italy have been missing a staple of many bases: Community Bank.

That will change Feb. 8 when the first branch in Italy opens in Vicenza. Five or six more are to follow at bases around the country over the next year or so.

&#8220;It has been an interesting road for us and we&#8217;re really excited to be at the end of it,&#8221; said Shannon Studders, who will manage the Vicenza office. Two other Americans will join her in the office along with nine local national employees.

Studders said she has spent much of the last year training at Community Bank operations in Germany, where the rest of the branch&#8217;s employees are now learning how the bank operates. She said she expects many potential customers to be familiar with the bank as well.

&#8220;There are a lot of people here who have had Community Bank accounts in the Pacific or in Germany,&#8221; she said.

Italian banks have traditionally handled many of the roles that Community Bank does elsewhere. A handful of such institutions currently operate at U.S. facilities around the country. Many times the Italian banks operate alongside U.S. credit unions.

Bank of America currently operates the Overseas Military Banking Program under supervision from the Defense Finance and Accounting Service.

Studders said branches in Italy would offer the same services they do elsewhere, including: checking and savings accounts, certificates of deposit, currency exchange, local bill payment and loans. Six ATMs will operate at Caserma Ederle, with another in the Villagio housing complex.

A branch at the U.S. Navy Capodichino base in Naples is scheduled to open within a few months, followed by one at Naval Air Station Sigonella. Further down the road are locations at Camp Darby, another branch in Sigonella and one or two branches at Aviano Air Base.