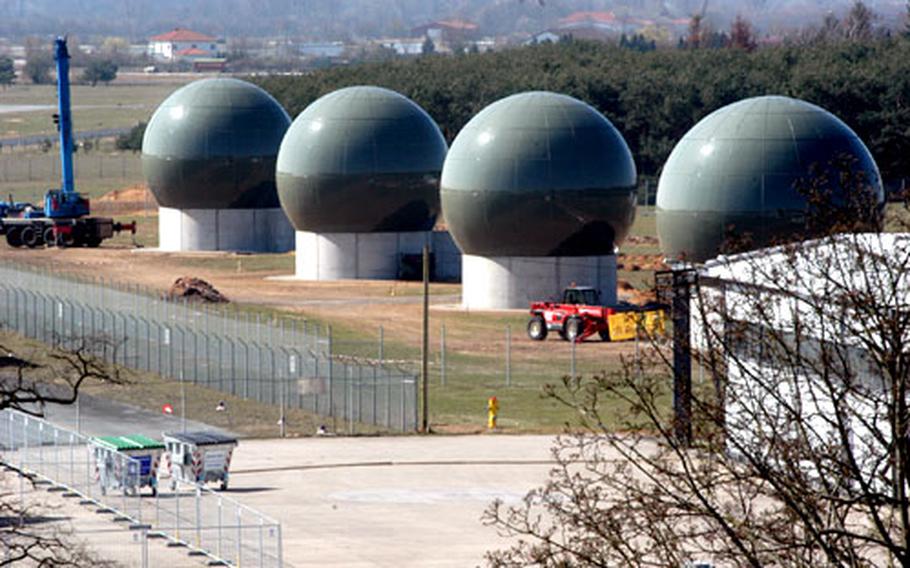 Buy Photo
Four globes, part of a controversial U.S. Navy communications relay, sit at a rural airfield skirting Griesheim, Germany. Town residents fear the site may be radioactive or engaged in illegal espionage. The military has assured the town that its project is safe. (Peter Jaeger / Stars and Stripes)

A controversial U.S. Navy communications relay &#8212; a transmitter and four green globes housing satellite receivers &#8212; arrived last week at an airfield bordering a town that fears the site may be radioactive or engaged in illegal espionage.

The military has assured the town that its &#8220;Icebox&#8221; project is both safe for neighbors and serves a noble purpose. Many local residents, though, remain skeptics.

&#8220;The people are very angry and they are anxious,&#8221; said Griesheim Mayor Norbert Leber.

The mayor said residents are chiefly concerned that the system sits just 200 yards from a German kindergarten and neighborhood.

&#8220;They are anxious because they fear there could be terrorism, or they could be dangerous for people in the area,&#8221; Leber said.

About 90 residents met Tuesday night to oppose the relay, which some worry is part of Echelon, an electronic eavesdropping system never admitted to by the United States but believed by the European Union to spy on telephone and Internet traffic across the globe.

The Griesheim brouhaha started last year, when the military announced it would move a relay from its Bad Aibling base in Bavaria to a new home at the August-Euler Airfield. The city of Darmstadt agreed. But the airfield bumps against the city limit of the hamlet of Griesheim, which had no say in the arrangement.

&#8220;We would have found another place,&#8221; Leber said. He wanted the relay moved to a more rural area, which is already the home of a U.S. Army intelligence unit and a good distance from any houses.

The city also tried to find a legal avenue to block the project, but failed.

The city of Darmstadt has said that Deutsche Telekom, the German telephone giant, studied the equipment and found it to be safe.

The Army&#8217;s 233rd Base Support Battalion, which manages the airfield, said it doesn&#8217;t operate the relay. And though the relay moved from Bad Aibling along with Army intelligence units, Capt. George Hammar, spokesman for the 66th Military Intelligence Group, said the equipment is run by U.S. Navy Europe in London.

The spokesman there, Lt. Cmdr. Terrence Dudley, did not return telephone calls Tuesday and Wednesday. He did issue an earlier statement denying that either the receivers or transmitter posed any health threat.

&#8220;There are no known health concerns in connection with these types of receivers,&#8221; Dudley wrote in November. &#8220;The transmitter, which uses a narrowly focused low-power beam, is oriented upward and away from all inhabited areas and presents no danger to the surrounding communities.&#8221;

As for its purpose, Leber said the military has assured him that the relay is benevolent.

Europeans have expressed such fears before. The European Parliament concluded in 2001 that the Echelon system existed and that it targets private and commercial communications, not military traffic.

In England, the joint communications center at Menwith Hill has historically grappled with protesters accusing it of illegal surveillance. The American Civil Liberties Union has also complained that Echelon operates without court or congressional oversight.

The U.S. military has not admitted to the system&#8217;s existence, but Australia and New Zealand, which along with Great Britain and Canada are reportedly part of the network, have confirmed it in the past. The system allegedly uses artificial intelligence to sift through spoken or written words and phrases looking for certain flags.

Leber said the German press has assumed the orbs are a link in this system.