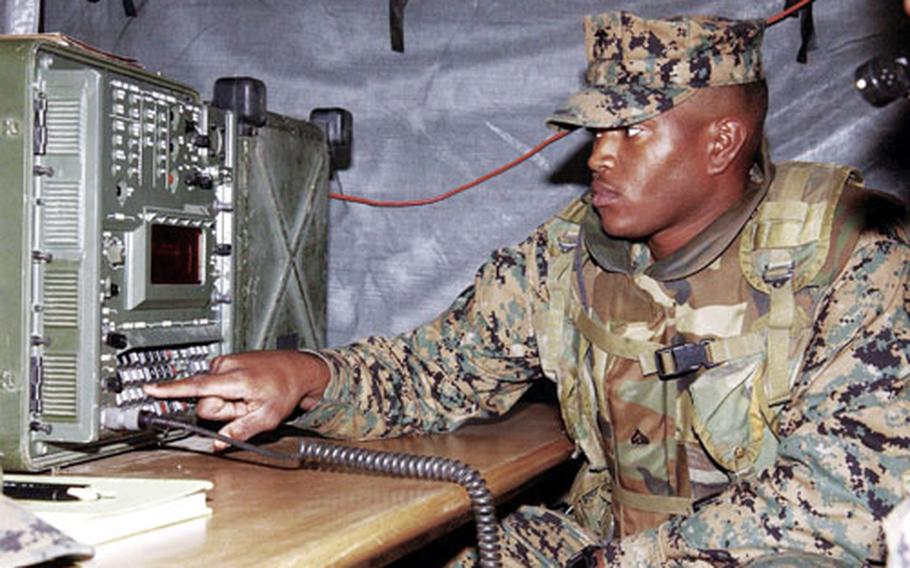 &#8220;This was a great training opportunity in the MOS (military operations specialty) of these Marines,&#8221; he said Wednesday.

The Marines ate meals at a nearby mess hall and slept in the barracks each evening but otherwise worked outdoors throughout, as did another group of Marines participating at the same time on Okinawa.

&#8220;We trained in establishing network connections to Okinawa via satellite and the Okinawa site connected to the outside world,&#8221; said Master Sgt. John M. Nightingale, MWSS-171 communications chief. &#8220;We all used tactical equipment that would be used in a real operations environment.&#8221;

He said a complete telephone network and computer networks were created at the Penny Lake site. Communication was established with the Okinawa site via secure satellite connection.

&#8220;The training opportunity was so valuable because many of these Marines are young, and this may have been the first time in field training at this level for many of them," Nightingale said Thursday.

Lance Cpl. Gregory Jeter is a field wireman with MWSS-171. His job was to hook up a telephone network on the site by running wiring from switchboards to each communications point.

&#8220;This was the first time I had done this in such an environment,&#8221; Jeter said. &#8220;I got a lot of training related to my MOS specifically, and the MOS of the people who work the switchboards.

&#8220;In the cross-training sense I learned a lot, including how to program the numbers for the individual phones and setting up loops.&#8221;

Capstone &#8217;05 was designed for such hands-on training and to ensure that equipment used in such instances is functional, officials said.

At both the Iwakuni and Okinawa sites, a satellite van was used for the computer connections on the networks.

&#8220;We built a network wired here on the ground and were on another network to communicate with Okinawa by satellite. They did the same thing down there that we did here,&#8221; McElroy said.

It was the first time McElroy set up a communication link with a remote site using a satellite.

&#8220;For the most part, the stuff I learned was outside my MOS. I learned a pretty good bit about how we communicate with satellites,&#8221; he said.