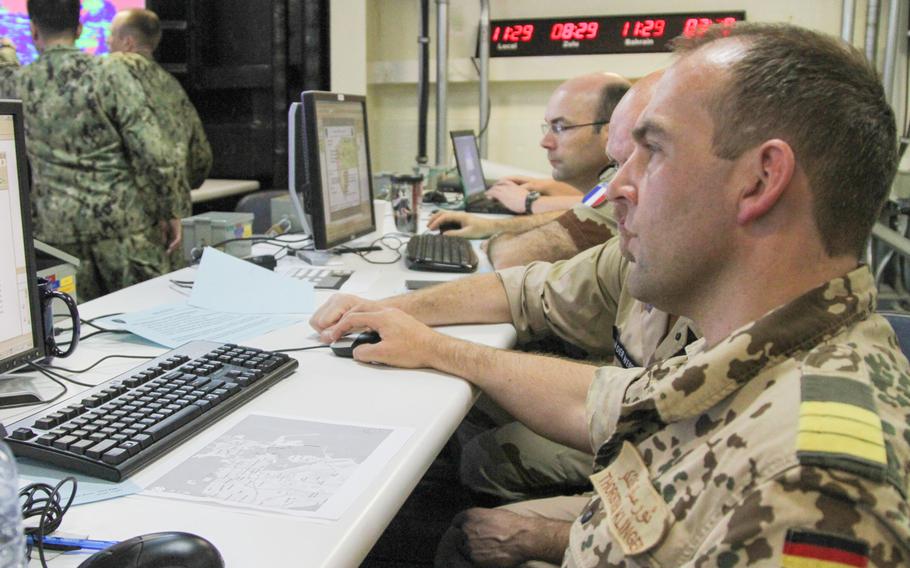 Cmdr. J.G. Thorsten Klinger of the German navy works in the joint operation center of the international mine countermeasures exercise aboard the USS Ponce May 16th. The U.S. was among 41 nations participating in the exercise in the Persian Gulf. (Hendrick Simoes/Stars and Stripes)

Cmdr. J.G. Thorsten Klinger of the German navy works in the joint operation center of the international mine countermeasures exercise aboard the USS Ponce May 16th. The U.S. was among 41 nations participating in the exercise in the Persian Gulf. (Hendrick Simoes/Stars and Stripes) 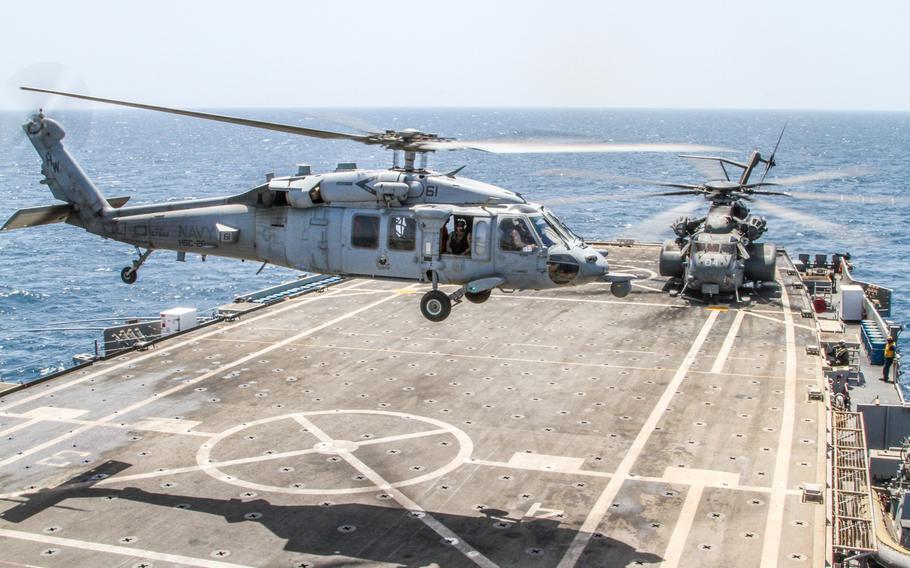 An MH-60 Helicopter takes off from the deck of the USS Ponce while an MH-53 helicopter prepares to take off in support of operations during an international mine countermeasures exercise in the Persian Gulf May 19th. (Hendrick Simoes/Stars and Stripes) 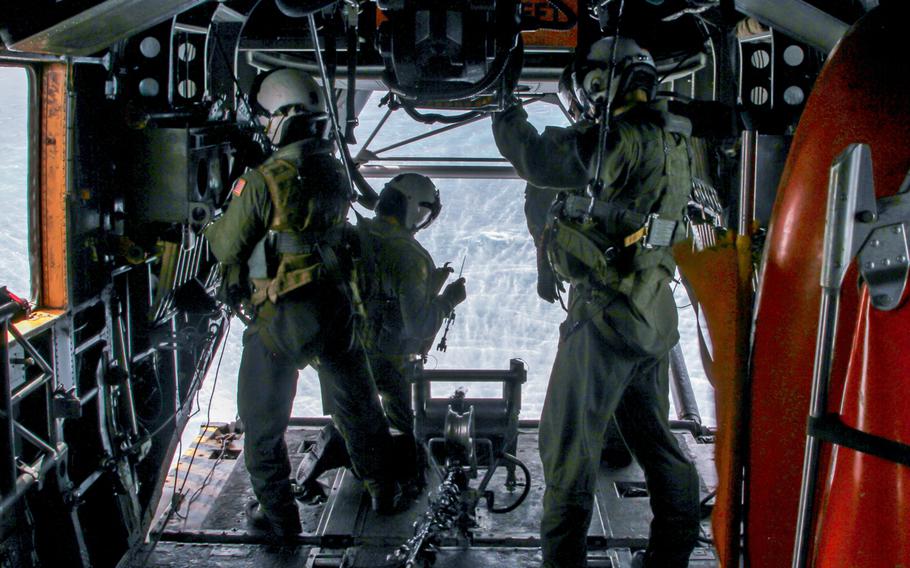 Air crewmen in the back of an MH-53 helicopter May 17th, prepare for a methodical mine sweeping process in which the helicopter tows underwater equipment that can cut the chains off sea mines, thereby revealing them when they float to the surface. (Hendrick Simoes/Stars and Stripes) 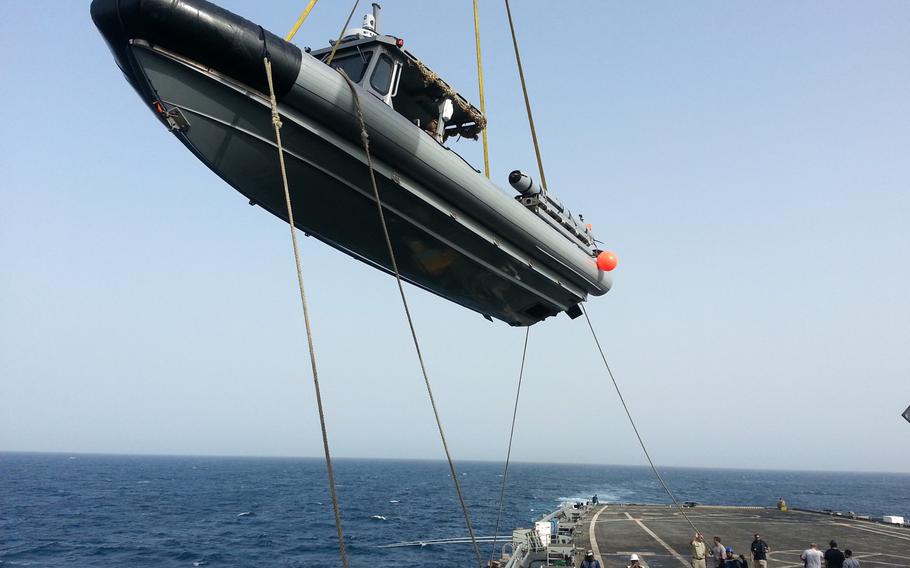 Sometimes boats do fly. The deck crew on the USS Ponce uses a crane to bring a Rigid Hull Inflatable Boat aboard the ship. The USS Ponce was participating in an international mine countermeasures exercise in the Persian Gulf. (Hendrick Simoes/Stars and Stripes) 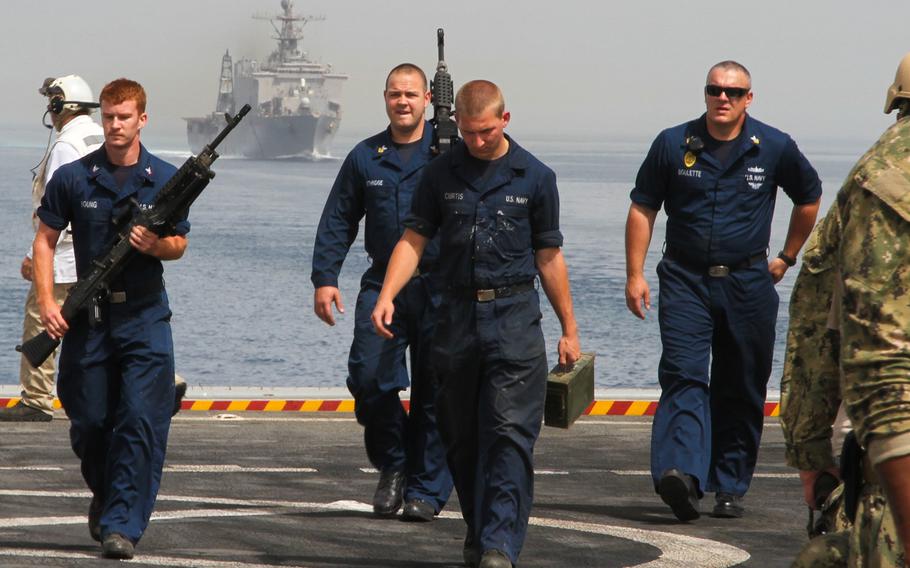 The security team on the USS Ponce stands down after reports of Iranian fast boats in the vicinity of U.S. warships May 16th. The USS Ponce was participating in an international mine countermeasures exercise in the Persian Gulf involving 41 nations. (Hendrick Simoes/Stars and Stripes)

ABOARD THE USS PONCE, Persian Gulf — Language is not the only barrier, when representatives from 41 nations come together for a massive sea exercise that requires intricate coordination. But overcoming those challenges brings rewards.

The three-week mine countermeasures exercise in the Persian Gulf that ends Thursday involved 6,500 sailors and 35 ships. Spread across 500 miles of water, drills involved hunting mines, search and rescue, training to handle mass casualties, and boarding and security operations at sea.

“It proved just as complex as we thought it would be,” said Commodore Simon Ancona of the British Royal Navy, commander of the international maritime exercise. “The things that we knew would be problematic did turn out to be challenging,” he told a news confererence last week at the U.S. 5th Fleet headquarters in Bahrain.

One of the hurdles was communication, not just language barriers, but also different operational techniques, said Lt. Stephenie Murray of the Royal Canadian Navy.

Murray explained that while NATO countries have standard operating procedures, the involvement of non-NATO nations forced everyone to think hard about greater integration.

For example, a dive team from one country may be required to dive during daylight hours, while another country’s dive team may prefer to work at night, when it’s not as hot.

“It’s nice to see the different thought processes,” Murray said. Learning how teams from around the world operate and adapting expectations is what made the exercise interesting for her.

“One of the things that is going well is the challenge in working with such a broad international group,” she said. “That in itself has been an awesome learning experience.”

Ancona said he was pleasantly surprised at how well everyone came together.

“I think there was some professional bonding that went on between various nations and quite a lot of friendship generated,” Ancona said.

Not everything went smoothly, however. The weather did not cooperate; heavier seas than expected forced the cancellation of several events. However, officials believe no training value was lost because participants improvised and devised other training simulations, such as communication drills.

Ancona said the ability of personnel to be flexible and make adjustments was cause for a “minor celebration.”

The weather was not the only thing that forced those participating in the exercise to face real world scenarios.

Early on in the exercise, an Iranian frigate shadowed U.S. ships. Even though interactions were professional and courteous between the vessels, the presence of the Iranians appeared to delay a scheduled test of an unmanned underwater vehicle, and later reports of a suspected citing of Iranian boats led to a security alert onboard the USS Ponce, the main staging ship for the exercise. Still, despite the political tensions between the West and Iran, U.S. naval officials insisted the exercise was not directed at Iran and naval commanders took the citings in stride, saying Iran was equally entitled to ply international waters.

“The exercise has been a great success,” Vice Adm. John Miller, U.S. 5th Fleet commander, said. Lessons learned from the exercise could be applied to keep any sea lane in the world open, he said.

Maritime security, he said, is “a global problem with global consequences that will require a global response.”