Buy Photo
Graves at Arlington National Cemetery, with a Pentagon parking lot in the background, on Jan. 30, 2018. (Joe Gromelski/Stars and Stripes)

Buy Photo
Graves at Arlington National Cemetery, with a Pentagon parking lot in the background, on Jan. 30, 2018. (Joe Gromelski/Stars and Stripes) 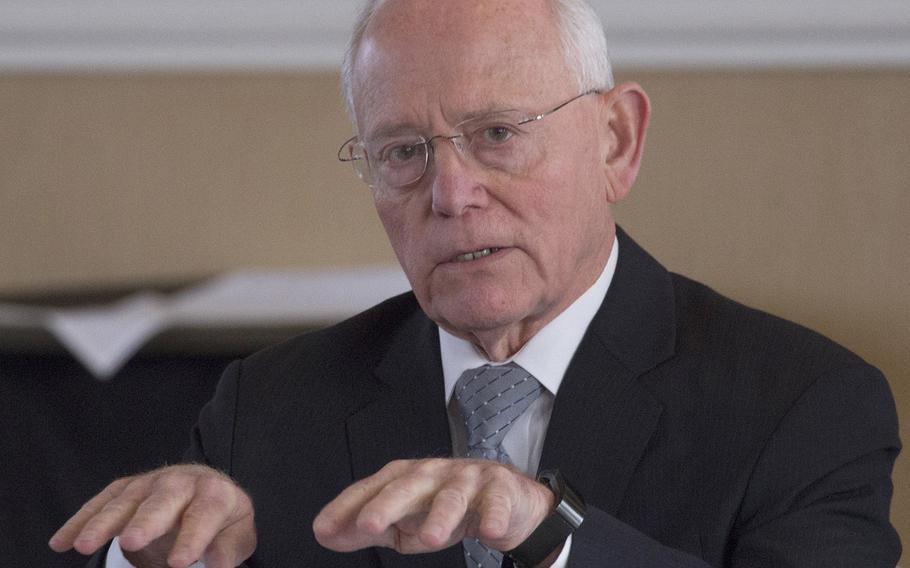 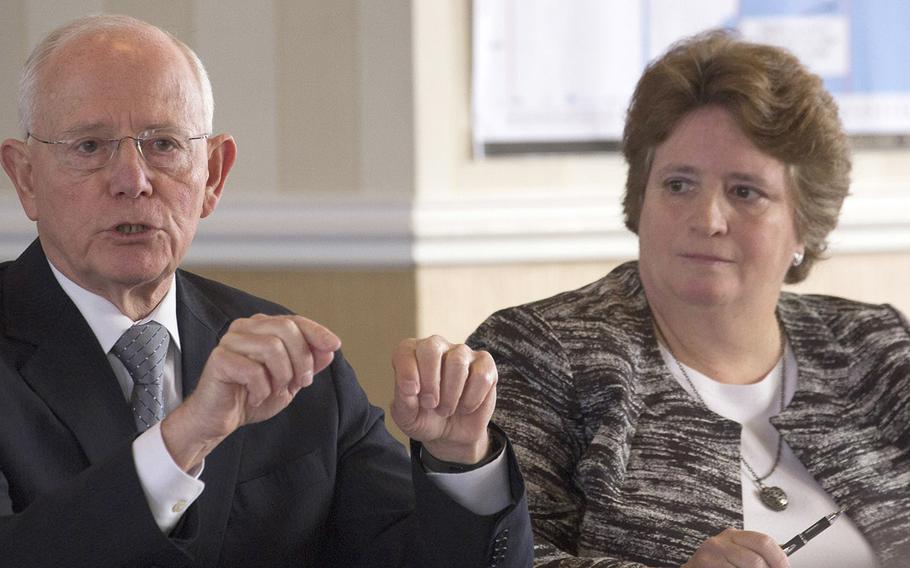 Buy Photo
Former Secretary of Veterans Affairs and retired Army Lt. Gen. James Peake speaks at a roundtable discussion hosted by the Honor Subcommittee of the Advisory Committee on Arlington National Cemetery, Jan. 30, 2018 at Arlington, Va. Next to him is Renea Yates. Arlington's deputy superintendent for cemetery administration. (Joe Gromelski/Stars and Stripes) 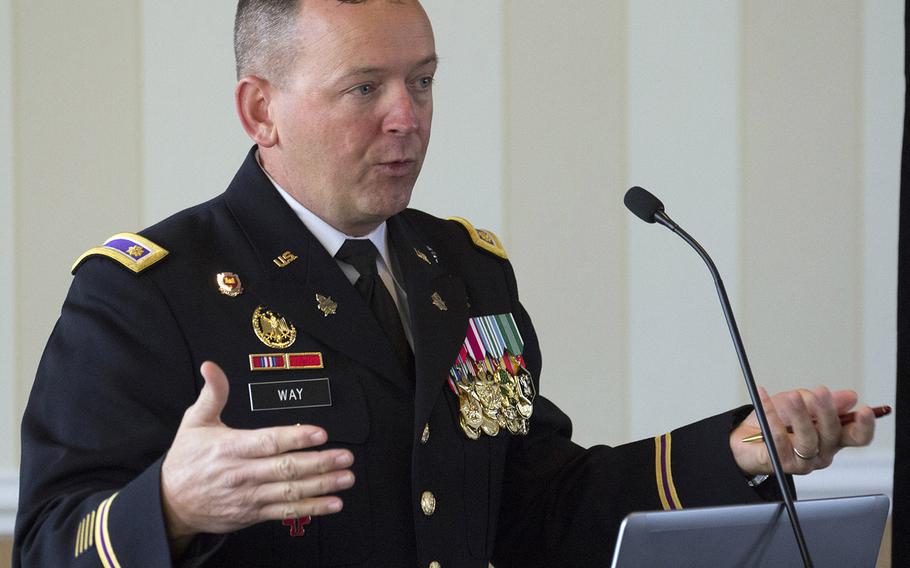 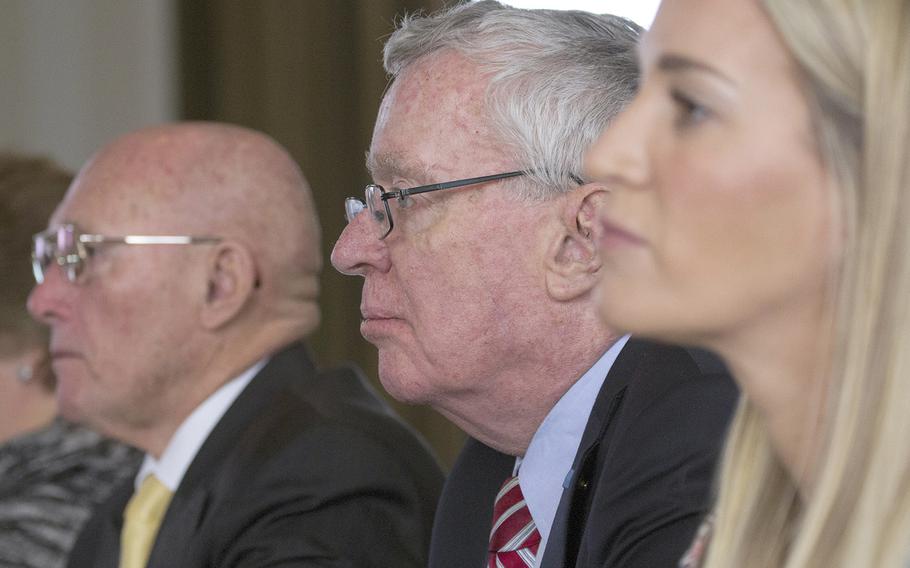 Buy Photo
Medal of Honor recipient Thomas Kelley, center, a member of the Honor Subcommittee of the Advisory Committee on Arlington National Cemetery, listens during a roundtable discussion on theemetery's future, Jan. 30, 2018. Next to him are committee members Gene Castagnetti, left, and Ryan Manion. (Joe Gromelski/Stars and Stripes) 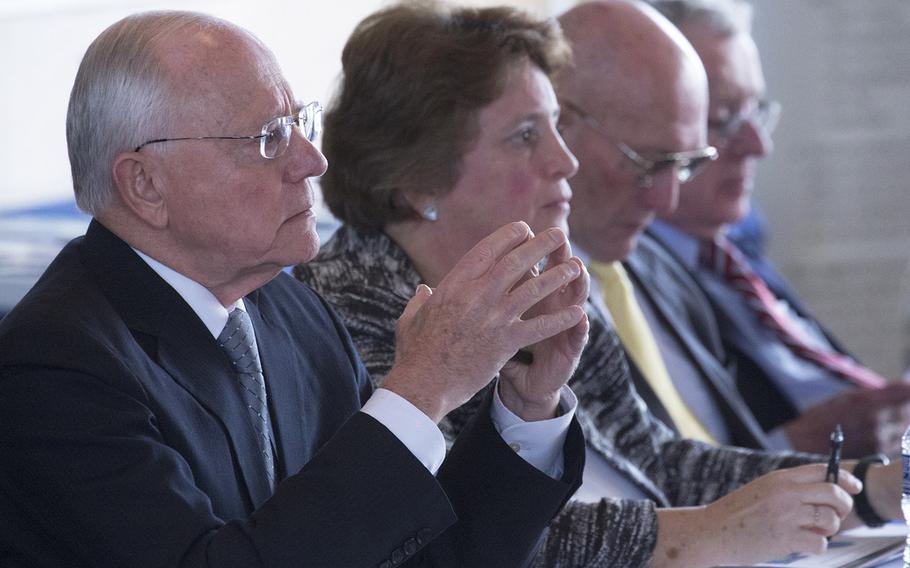 ARLINGTON, Va. — Arlington National Cemetery — a place long-viewed as a shrine to America’s fallen heroes — is nearing the end of its lifespan, but a group of people with a lead role in deciding its future got one step closer Tuesday to reviving it.

Situated in a conference room on the top floor of a hotel overlooking the Pentagon and parts of Arlington National Cemetery, members of the cemetery advisory committee discussed options to keep it viable — including an expansion into fresh territory and changing eligibility standards for burial there.

During the next nine months to one year, the committee will be forced to make problematic decisions. All the options to create more space are teemed with logistical challenges, and committee members are anticipating emotional and possibly visceral responses to new rules that would keep some veterans from interment in the country’s most hallowed ground.

“None of these options are easy,” surmised retired Lt. Gen. James Peake, the committee chairman.

The cemetery is set to finish a 27-acre expansion this spring. Cemetery strategic planner Maj. Shannon Way said plans for the expansion, titled the Millennium Project, started when Bill Clinton was president — potentially before the birth of some of the servicemembers who will be buried there.

The project brings the cemetery to slightly more than 100,000 available burial sites. Even with the expansion, the cemetery is estimated to reach capacity in 23 years.

“The question is, who should be eligible for those 100,000?” said retired Lt. Col. Renea Yates, the cemetery’s deputy superintendent for administration.

Under current rules, most veterans and military retirees are eligible for either above- or below-ground burial in Arlington.

“The demand for burials of these veteran populations are simply too high for [Arlington National Cemetery] to handle and stay open for future generations,” Way said.

The 10-member Advisory Committee on Arlington National Cemetery is comprised of mostly retired military, including Medal of Honor recipient Capt. Thomas Kelley, as well as former congressman Chet Edwards and Ryan Manion, the sister of 1st Lt. Travis Manion killed in action in 2007. Karen Durham-Aguilera, the executive director of Arlington National Cemetery, will take the committee’s advice and make recommendations later this year to Secretary of the Army Mark Esper about the cemetery’s future.

Before lending their advice, committee members are gathering input from as many people as possible. On Tuesday morning, they were joined by veterans and military organizations and House and Senate staff. Their purpose was to review a survey of 28,260 people about how, or whether, Arlington National Cemetery should expand.

The survey was available from July through November to anyone who wanted to participate, and it was mostly answered my veterans, servicemembers or their family members. Of those who responded, 93 percent wanted Arlington to remain open into the 2100s. About 40 percent thought the Army should expand the perimeters of the cemetery and restrict eligibility for burial.

Most people said the cemetery should at least remain open to Medal of Honor recipients and servicemembers killed in action. If there are new eligibility rules, people surveyed thought politicians, honorably discharged veterans and military retirees should be the first groups restricted.

The committee will conduct another, more detailed public survey this spring. It will ask about specific expansion options, which Tuesday included taking parts of Pentagon parking lots for burial sites or adding spaces closer to the U.S. Marine Corps War Memorial. Another option discussed Tuesday was to annex the Henderson Hall portion of Joint Base Myer, potentially eliminating a military health clinic, commissary, chapel, child care facility and other buildings.

The cemetery is in the process of negotiating construction costs for a 37-acre project titled the Southern Expansion. Most recent estimates peg the project at a cost of approximately $274 million with a completion date sometime between 2025 and 2027. However, working with Arlington County on the expansion is taking longer than expected, Peake said.

But expanding into new territory won’t be enough to keep Arlington an active cemetery, Way said. It’s expensive, and each new acre keeps the cemetery viable for only three more months.

“What we need to know is, what do veterans and military retirees and American citizens think about changing eligibility standards?” said Edwards, a former Democratic congressman from Texas.

Eligibility changes are likely to be the focus of the next survey, which will go online in March or April. The committee will meet again in June to go over the results.

“It will help shape the view of what we’re trying to consider here for the future of this iconic national cemetery,” Peake said.