Commissary waiting for Congress to shut it down 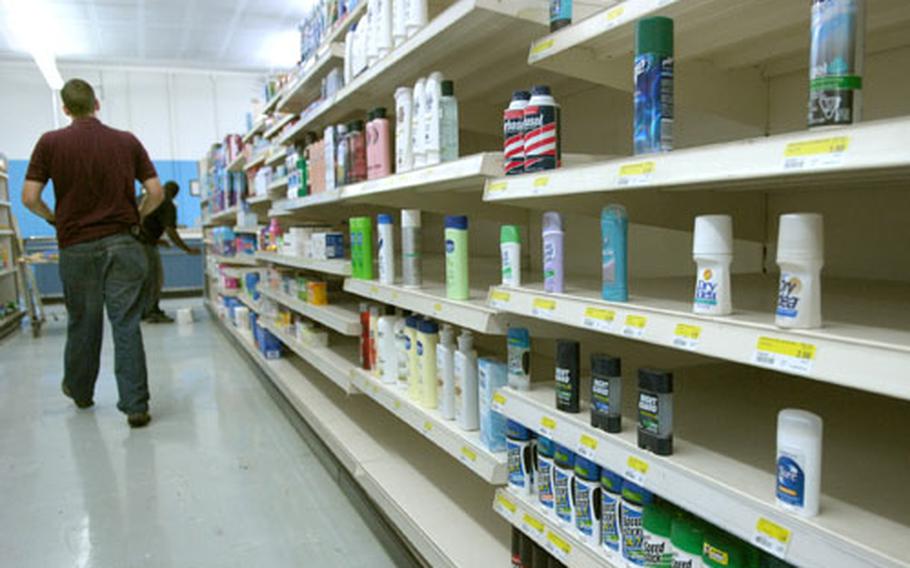 Alexi Vazquez, a work supervisor from Hanau, consolidates merchandise on one of three remaining aisles at the Büdingen commissary. The soldiers have left the area, but both the Büdingen and Gelnhausen commissaries have remained open while waiting for congress to OK their closure. (Ben Bloker / S&S)

GELNHAUSEN, Germany &#8212; The grass is long, the buildings are vacant, and the playground swings would be still but for a slight afternoon breeze blowing through the abandoned U.S. Army housing area in Gelnhausen.

Asked if many people pass through the front gates, a Pond Security guard shakes his head.

With no mission and the 1st Cavalry gone for good, where would they go?

While most of the Coleman Housing area looks rather bleak, with the soldiers and families gone and work well under way to return the base to Germany, there is still one place with signs of life.

At the small commissary on post, the lights are on, the shelves still hold items and music plays over the store intercom system. Like the last bright ember in a tired campfire, the Gelnhausen commissary is a burst of life in a community not long for everlasting slumber.

Lately it&#8217;s been just a handful of folks, mostly retirees or military cops on patrol.

It&#8217;s been nearly two months since the last cavalryman rode off into the sunset, but the commissaries in Gelnhausen and B&#252;dingen remain open under a law that requires a 90-day waiting period once Congress is notified of the closure. For both communities, the wait ends Friday, making the Defense Commissary Agency-Europe the last among the regulars to leave the stable.

&#8220;For us to still be in business behind locked gates is truly going above and beyond&#8221; the call, said Gerri Young, spokeswoman for DeCA-Europe. &#8220;It was not our intention for it to be this way, though we always strive to be among the last.&#8221;

Over the past few months, sales, understandably, have fallen off.

DeCA filed the necessary paperwork on June 5 to close the commissaries, Kevin Robinson, a DeCA headquarters spokesman, indicated in an e-mail. The original target date was Oct. 1. The closure request was routed to the office of Michael Dominguez, the principal deputy undersecretary of Defense for personnel and readiness. However, his office didn&#8217;t formally notify Congress of the request until July 13, Robinson said.

Five weeks later, the last of the soldiers departed.

In her 16 years with DeCA-Europe, Young says she is unaware of any similar situation in which the active-duty force is entirely gone but the commissary stays open well beyond the final formal farewell.

The cost of keeping the two commissaries open during this period has been minimal, Eller said. Basically, it&#8217;s utility bills and the salaries of two store employees at each location. Whatever stock is left will be sent to Hanau.

Military veterans who live in the area certainly haven&#8217;t been complaining. Once the B&#252;dingen and Gelnhausen commissaries close Friday, the vets will have to drive to Hanau &#8212; and in a year&#8217;s time to Wiesbaden &#8212; for their American groceries.

But for the time being, the shelves and coolers are stocked with an assortment of goods. The shopping list includes such things as fresh milk, frozen meat, party candles, cookies and maple syrup. There isn&#8217;t much in the way of veggies and fruits, but what do you expect, given the shelf life of the two annexes?

He was the commissary&#8217;s first customer in more than an hour.