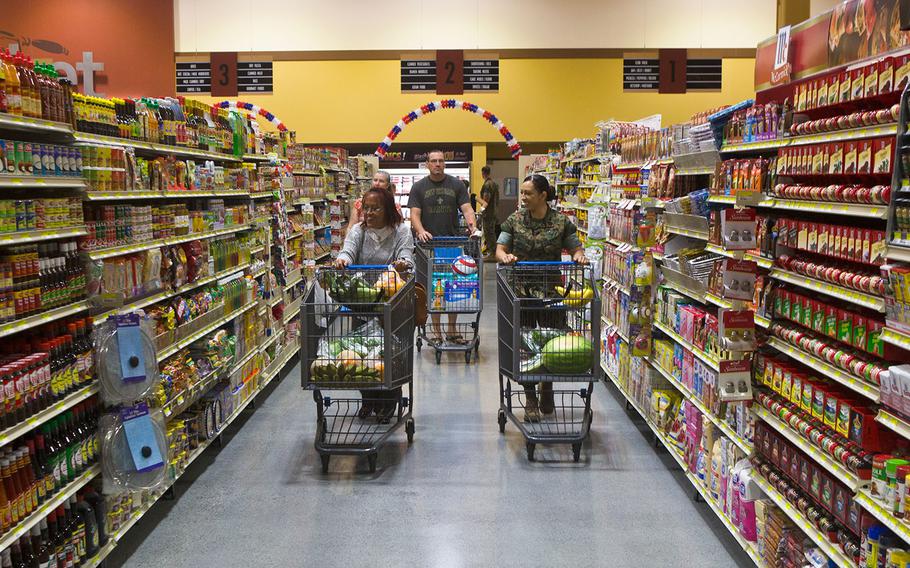 SAN ANTONIO — The agency responsible for running the vast network of commissaries on military bases said sales have declined for a fourth straight year, as Congress eyes line items to cut from the defense budget.

The Defense Commissary Agency said it earned $5.25 billion in sales in fiscal year 2016, down $258 million, or nearly five percent from last year. The agency received about $1.3 billion in appropriations for each of the last two years, said Kevin Robinson, a DeCA spokesman.

Sales exceeded $6 billion in 2012, which amounts to loss of more than $841 million since then, according to DeCA data.

There are several factors leading to lost sales beyond competition from other stores such as Costco and Sam’s Club, said Joseph H. Jeu, the director and CEO of DeCA.

The decline in sales mirrored force reductions, with 130,000 active-duty troops trimmed from the military since 2012, Jeu said.

An increase of unmarried troops is also a factor, he said, because they often prefer to have meals at on-post dining facilities or at restaurants. Jeu pointed to a Commerce Department report this year, which stated restaurant spending outpaced grocery spending in the United States.

Losses were compounded by overall price deflation for groceries coupled with commissaries selling at cost instead of a markup. For example, egg prices fell 55 percent at commissaries from July 2015 to July 2016, and only 29 percent at commercial stores, Jeu said. That translates to a 54 percent decline in revenue even with a boost in egg sales, he said.

The Defense Commissary Agency is responding by emphasizing customer service across 240 facilities worldwide. The agency has launched online ordering and curbside pickup at Fort Lee in Virginia, Offutt Air Force Base in Nebraska and Travis Air Force Base in California, Jeu said. The agency also plans next spring to launch cheaper, name-brand-equivalent private label items, he said.

“It’s really striking how popular the commissary remains, even with the options available with big box stores,” she said. “We have no evidence that popularity is waning. To the contrary, it seems as popular as ever.”

Roth-Douquet pointed to the results of Blue Star Families’ upcoming annual survey as indication that troops and families are typically happy with commissary services.

Ninety-seven percent of more than 8000 respondents, active-duty troops and their spouses, have used the service, according to BSF data released to Stars and Stripes. Nearly 90 percent of spouses were satisfied with the commissary, according to the data.

The survey also concluded the commissary was the most-used benefit available to families, with the highest customer satisfaction compared to other benefits, such as base housing and child care.

The convenience and value of commissaries remain attractive, Roth-Douquet contends. As sales decline, the commissary will become an easy target for budget cuts in an austere spending environment if Congress assumes the service is not vital to families, Roth-Douquet said. The decision would negatively affect military families, she said.

“What policymakers have to take into consideration is how popular commissaries are. They have to be ready to address the consequences of eliminating them,” she said.