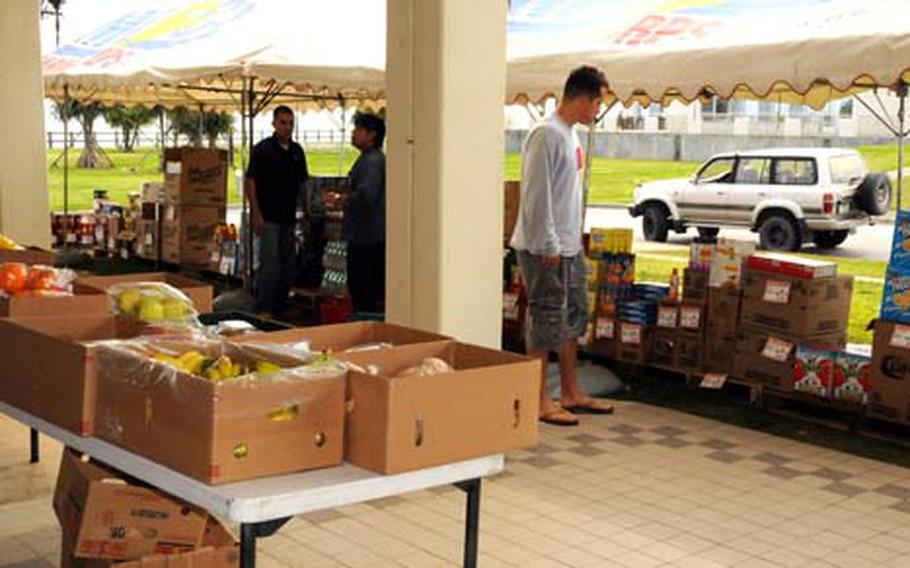 Marines check out food offered at the Commissary on Wheels outside Camp Schwab’s theater on Saturday. (Cindy Fisher / S&S)

CAMP SCHWAB, Okinawa &#8212; For Marines living in the barracks on Camps Hansen and Schwab, getting to a commissary isn&#8217;t easy.

Most don&#8217;t have cars and the closest commissary is on Camp Courtney &#8212; about 30 minutes from Hansen and an hour from Schwab. This limits their food purchases to fast food or "pogey bait" &#8212; microwavable foods, chips and other junk food &#8212; available at base shoppettes and exchanges.

So Daniel L. Smith, the Courtney Commissary store director, said he decided to bring the commissary to them. Since August of last year, Commissary on Wheels has visited Hansen at least three times and Saturday was its second visit to Schwab.

Commissary on Wheels provides a broader selection of cereals, drinks and other items than can be found at the base exchange. It also brings fresh meat, produce and barbecue items that aren&#8217;t sold at the exchanges, Smith said.

The Marines put together a list of requested items and that&#8217;s what he brings with him, Smith said.

"One item they really wanted was fresh steak," he said.

Cpl. Robert Geghardt, 24, who said he&#8217;s never shopped at any of the commissaries on Okinawa, said he welcomes the chance to buy fresh meat and fruits.

Lance Cpl. Luther Simonds, 22, said he once made the bus trip down to Foster&#8217;s commissary just to buy barbecue stuff. But he said he preferred the commissary coming to him.

Commissary on Wheels doesn&#8217;t have a schedule for visiting the two camps, Smith said.

The service is provided when the Marines request it and Smith can coordinate use of the trucks shared by all four commissaries on Okinawa, he said.

"There&#8217;s a lot of logistics involved," Smith said. But, "this isn&#8217;t about how much money we can make, this is about bringing the Marines the commissary benefits" they rate as part of their military benefits package.