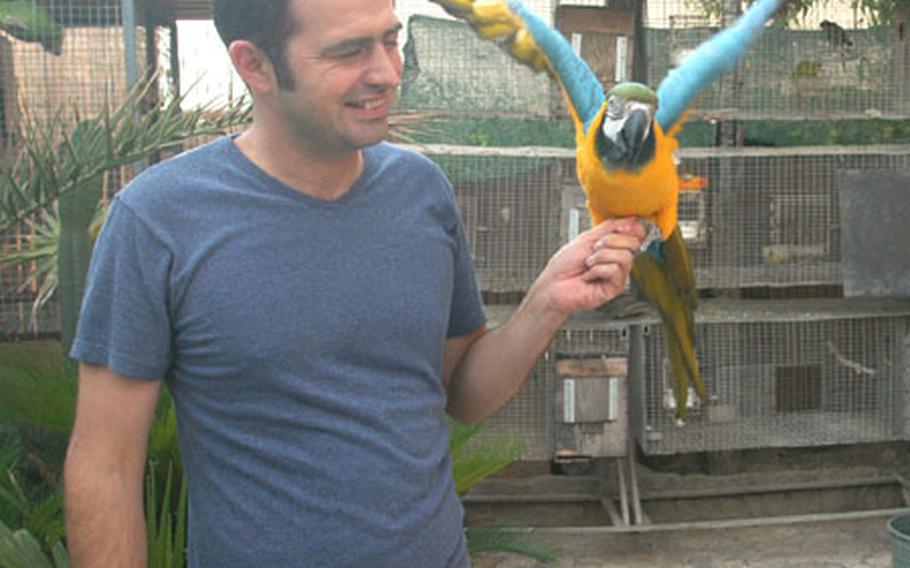 Randy Berry holds up one of his macaws in his back yard Friday. Berry owns about 300 birds, mainly parrots and macaws, and works in the Gricignano housing area commissary. Some of the cages he and his brother, William, built are in the background. (Jason Chudy / S&S)

Randy Berry holds up one of his macaws in his back yard Friday. Berry owns about 300 birds, mainly parrots and macaws, and works in the Gricignano housing area commissary. Some of the cages he and his brother, William, built are in the background. (Jason Chudy / S&S) 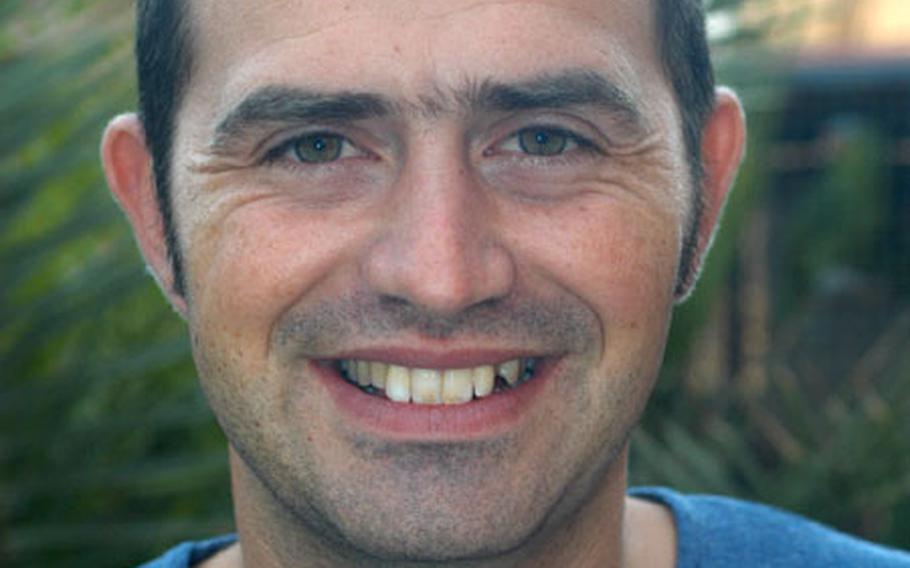 Randy Berry&#8217;s house is definitely for the birds.

There are baby birds in the bedroom, juvenile birds in a closet and big birds in the living room. Don&#8217;t even think about playing basketball on his childhood court; there are bird cages over the entire surface.

Berry, the son of a retired sailor, cares for about 300 birds, ranging in size from the 3-foot-long blue-throated macaw to fist-sized finches at his Pinetamare, Italy, home.

What started out as a teenage hobby became an adult obsession that has made him one of Italy&#8217;s best-known exotic bird keepers and has garnered international recognition.

&#8220;It&#8217;s kind of more like a disease,&#8221; Berry joked while sitting in the back yard of the home he shares with his brother, William. Dozens of birds squawked, chirped, and screeched all around him.

Berry, who was born in Italy and decided to remain there, says that his brother was the first in the family to get a pet bird &#8212; a parrot from a friend&#8217;s mother &#8212; when he was a teen. The brothers soon realized that caring for exotic birds drew another species to their home: girls.

But Berry&#8217;s main interest was the birds, and as that interest grew, so did his collection. Over the years since high school, Berry has added other parrots, macaws, parakeets, finches and love birds.

The Berry brothers built dozens of cages and breeding boxes that line their back yard. Inside these boxes, female birds care for their eggs. Those that breed regularly &#8212; and are consequently more common &#8212; are sold to keep the hobby going since providing fruit or seed for 300 birds isn&#8217;t cheap.

Berry and his brother also provide all medical care for the birds, as well as to any injured wild birds that people give them. On Friday afternoon, Berry brought home a sparrow with a broken wing he was given by a base employee.

They&#8217;ve even stitched together the chest of a friend&#8217;s macaw that had gotten loose and hurt itself.

The paperwork alone for his blue-throated macaw took 1&#189; years to complete.

Berry said the blue-throated macaw is an endangered species, with only about 150 left in Bolivia, their natural habitat.

He said that rarer birds are individually tracked and banded. Each captive-bred exotic bird also gets a unique cylindrical tag shortly after hatching that carries the breeders&#8217; personal ID number and specific information about the bird.

This allows breeders to know about the bird&#8217;s lineage, which cuts down on in-breeding, and lets officials know that the bird wasn&#8217;t taken from the wild.

Barry&#8217;s bird knowledge and years of experience have made him a recognized name in Italian parrot circles. In 1999, he attended an invitation-only conference at Loro Parque Fundacion in the Canary Islands, which is home to the world&#8217;s largest captive parrot collection. The foundation is a non-profit international organization that, according to its Web site, works to conserve parrots and their natural habitats. It holds a conference only every four years.

Berry is trying to open an exotic bird park. Southern Italy, he said, has a good climate for the birds.

Until he creates his park, Berry is content showing off his birds to friends, or taking them to the base middle and high schools.