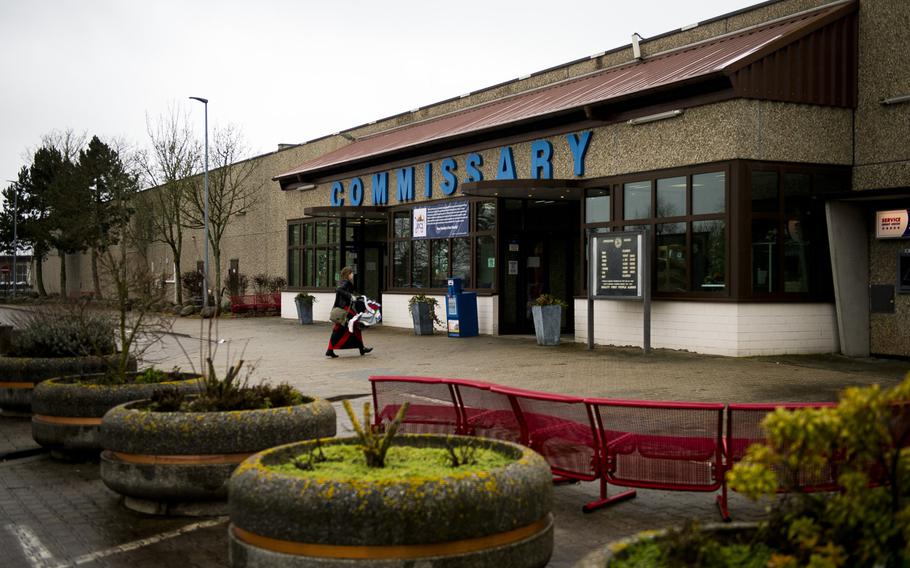 The Sembach commissary is scheduled to close April 29, 2016, as part of the ongoing consolidation of U.S. forces in Europe. ()

KAISERSLAUTERN, Germany — The Pentagon is seeking to cut the commissary operating budget for fiscal 2017 by about $221 million, a reduction that may be reflected in the Defense Commissary Agency’s plan to close some stores in Europe this year.

Two of the agency’s smaller commissaries in Germany are slated to close this spring, at Sembach and Illesheim, DeCA officials said this week. The closures are part of plans announced a year ago to begin consolidating Defense Department infrastructure in Europe. The plan calls for one commissary per military community with the exception of Grafenwoehr and Kaiserslautern, said DeCA spokesman Richard Brink.

The consolidation plan also targets commissaries in the Stuttgart military community, Brink said. The commissaries on Patch, Kelley Barracks, Robinson Barracks and Panzer Kaserne will close once a replacement store on Panzer is built, he said. A construction date for the new commissary has not been announced.

DOD fiscal 2017 budget documents show a request of about $1.2 billion to operate commissaries, down from $1.44 billion in fiscal 2016. DeCA officials on Wednesday could not say immediately whether the reduction reflects the pending closures in Europe.

Both Sembach and Illesheim have had a commissary since at least the early 1960s, DeCA officials said. The stores were open five days a week and total annual sales from each ranked in the bottom third of DeCA’s 240 commissaries worldwide. The Sembach store had sales of $3.8 million for fiscal 2015, and Illesheim recorded $2.5 million in sales that year.

But the Sembach store was serving a growing community. Since the Army took over Sembach from the Air Force in 2010, the personnel assigned to the post has grown, with several agencies, such as the Army and Air Force Exchange Service and Department of Defense Education Activity moving their Europe headquarters to Sembach in recent years.

As of last fall, about 630 military personnel and 535 Army civilians worked at the base, according to U.S. Army Garrison Rheinland-Pfalz officials. About 160 soldiers live in the barracks, though no military families live on post, officials said.

Customers shopping at the Sembach commissary Wednesday said the closure will likely most affect the single troops who live on post and routinely shop at Sembach, and civilians who commute to Sembach from Wiesbaden and Heidelberg, since those communities are in the opposite direction of Vogelweh and Ramstein.

“It really limits our options,” said Petty Officer 1st Class Molly Treece, who works at American Forces Network on Sembach. “My airmen, soldiers that live over here, this is their grocery store. They’re going to be forced to drive all the way to Ramstein or Vogelweh; it’s not life or death but it’s definitely an inconvenience for them.”

Hannah Ellis, who usually shops at Sembach after picking up her kids from Sembach Elementary School, said she prefers Sembach for the convenience, but also because “it’s usually really slow. It’s not crowded, so I understand why they’re doing it,” she said of the closure.

As word begins to spread that the commissary will be shuttering, Sembach Kaserne site manager Rob Floyd said many people want to know “why?”

“Single soldiers, they want food options,” he said. “Our sergeant majors are working on that issue.”

Floyd, who lives in Heidelberg, does most of his food shopping at Sembach.

“When my wife gives me the honey-do list, I go here.”

Stars and Stripes reported Mike Keller contributed to this report.