Commissaries not immune to weak dollar 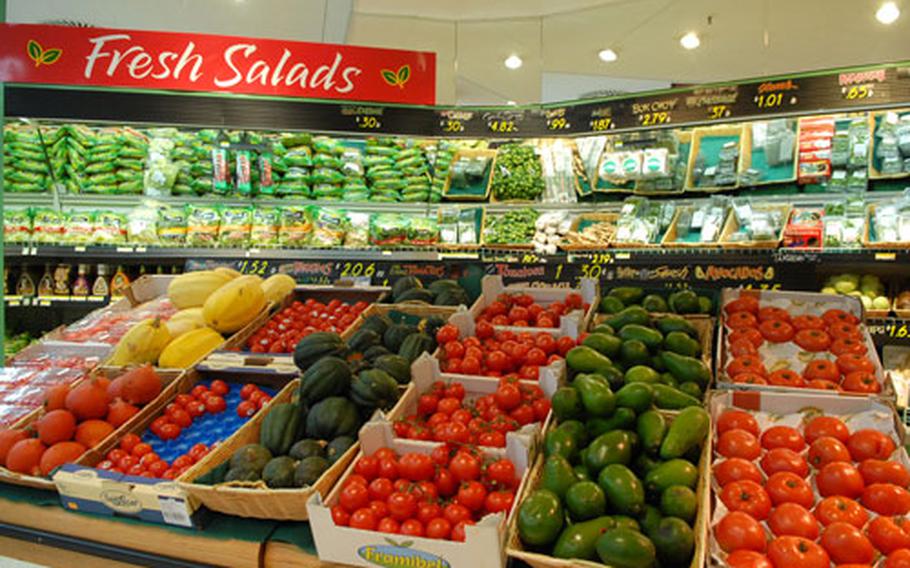 A strong euro can make items purchased locally by the Defense Commissary Agency, like the produce seen here at the Mannheim, Germany, commissary, more expensive for Americans. (Michael Abrams / S&S)

It should come as no surprise that Americans stationed in Europe are spending more at the commissary now than they were a year ago.

Off-base prices, driven by the strengthening euro, have driven some Americans back inside the gates.

But U.S. installations aren&#8217;t always the sanctuary overseas Americans hope they are. Things like fresh food and light bulbs bring higher prices from outside the gate onto U.S. bases.

While the majority of items sold in commissaries come from the U.S., an array of local fare, some considered essential by American appetites, is bought in Europe by the Defense Commissary Agency using the local currency.

Fresh dairy and meat products, fresh produce, fresh eggs, coffee, fresh bread and bakery items, and 220-watt light bulbs are among those items, Kevin Robinson, a DeCA spokesman, wrote in an e-mail to Stars and Stripes.

Though prices on those items have increased only marginally or not at all in euros over the past year, the exchange rate has driven costs up for locally purchased goods.

For fresh chicken, DeCA pays the same 3.65 euros per kilogram now that it did last November, Robinson wrote. But because of the exchange rate, the price DeCA pays for that chicken has actually increased from $4.67 per kilogram in November 2006 to $5.18 per kilogram this month. That added cost is passed on to DeCA&#8217;s customers.

Last November, DeCA paid 31 euro cents per liter of non-carbonated mineral water. It still pays 31 euro cents for the water, Robinson wrote in an e-mail response to Stars and Stripes, but because of the exchange rate, 31 euro cents is now the equivalent of 44 U.S. cents, compared to 40 U.S. cents a year ago.

It is unclear how much of an observed increase in DeCA&#8217;s sales comes from the more expensive euro, how much from Americans&#8217; doing more shopping on base, and how much from U.S. inflation.

Compared to last year, the number of customers visiting the commissary has increased, as has the average grocery bill, according to Robinson.

At the Naples commissary, one of three in Europe for which DeCA provided sales figures, the number of customers who passed through the checkout line increased from 34,402 in September 2006 to 35,722 this September &#8212; a gain of 3.8 percent.

Inflation in the U.S. could be responsible for about a half of that rise.

&#8220;Grocery store food prices increased at a 6.7 percent annual rate in the first nine months of 2007,&#8221; according to a report from the U.S. Bureau of Labor Statistics, which tracks consumer prices.

The more costly euro also has some role in pushing those sales figures up.

DeCA tries to compensate for the weak dollar, Robinson wrote, by offering American-made alternatives to fresh vegetables, chicken and other items with short shelf lives.

Examples include frozen chicken, canned and frozen vegetables, and numerous U.S. dairy items such as yogurts, butters and creams.

Still, those prices are locked in using euros, not dollars.

One variety of eggs under long-term contract went up a modest 5 euro cents in the last year, but that small rise has DeCA and its customers paying $1.52 this November, compared with $1.31 for the same dozen a year ago, according to Robinson.

8.9%Average increase in the grocery bill for shoppers at Naples commissary. Americans may be buying more at the commissary, but prices have jumped as well for products DeCA buys on the local economy.