Commissaries cracking down on black marketing in South Korea 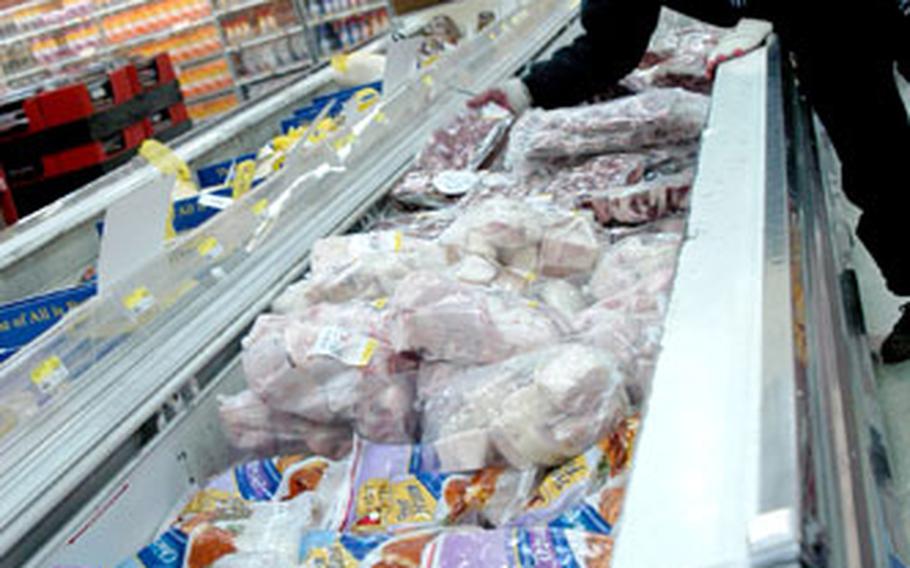 Frozen ox tails, like these being stocked by this commissary worker, are also popular on the black market. (Teri Weaver / S&S)

Frozen ox tails, like these being stocked by this commissary worker, are also popular on the black market. (Teri Weaver / S&S) 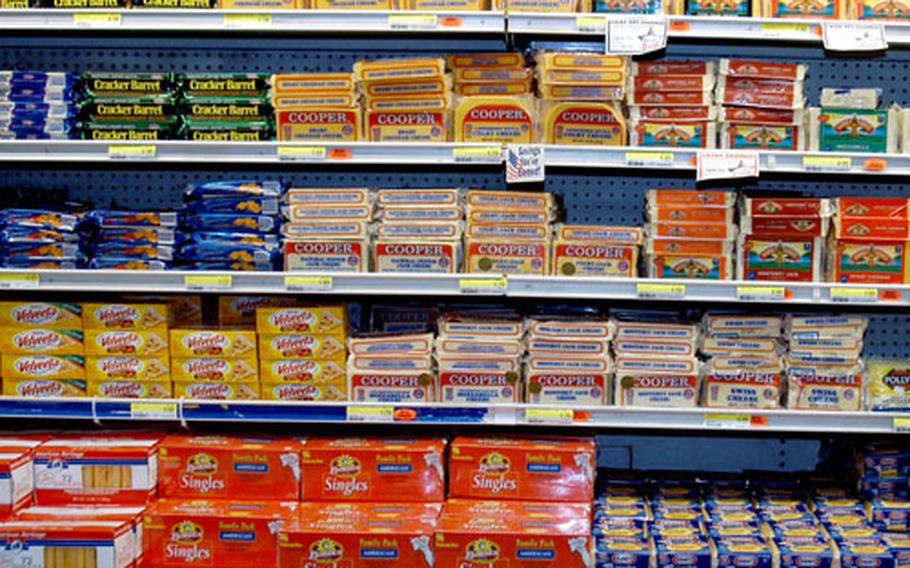 Many items that end up on the Korean black market start from the shelves and freezers at the 12 U.S. military commissaries throughout South Korea. American-packaged cheese is one of the most popular items. (Teri Weaver / S&S)

(Editor&#8217;s note: This is the first day of a two-day series. Part II: While the U.S. military is making strides in tracking purchases at commissaries that may be headed for the black market, AAFES &#8212; the Army and Air Force Exchange Service &#8212; still has a long way to go in keeping up with its merchandise, which includes liquor, electronics and sports equipment.)

The technology is so precise that it can spot the shopper who occasionally buys one or two packages of hot dogs but never remembers the buns. It can find the childless person who routinely buys baby food and formula. It can pick out the retired officer who just happens to cash out in the same checkout lane &#8212; manned by the same cashier &#8212; during every shopping excursion.

&#8220;We can pinpoint a single person to a single purchase at a single facility,&#8221; said Richard &#8220;Tony&#8221; Rogers, the computer software developer who helped write the black market program.

And they can do it with little more than a few clicks of a computer mouse.

The program is called CASTAR, for computer-assisted sales tracking and reporting. It compares the techniques of former black marketers &#8212; those who have been caught by military and Korean officials &#8212; with the habits of today&#8217;s 48,600 commissary shoppers to look for potential crimes.

The black marketing of U.S. goods outside of American bases dates back to the Korean War, and both countries have worked for years to catch Americans and Koreans who skirt government fees and customs laws by reselling items on the streets. USFK declined to estimate the volume of dollars involved in the illicit trade.

Many black marketed goods, like sports equipment, electronics, furniture, clothing and alcohol, are from stores operated by AAFES &#8212; the Army and Air Force Exchange Service. To date, AAFES lacks the same sophisticated program now available to South Korea commissaries, which are run by a separate agency.

It&#8217;s the popular food items like American beef, cheese, vitamins, baby food and California rice that come from the commissaries. Military officials believe they now have a leg up on catching grocery-shopping offenders, and already investigators are looking more closely at some people because of the program, officials said.

&#8220;We are going to be doing a better job at catching you,&#8221; said Air Force Lt. Col. Michael J. McCarthy, the chief of the data management division for USFK.

In the past, military police and customs officials have relied on tips, firsthand observations and obvious rule-breaking &#8212; mainly people who spend more than their monthly grocery limits &#8212; to bust black marketers, according to USFK&#8217;s data management division and customs office. At AAFES stores, investigators still rely on those strategies.

But with the new technology at commissaries, military investigators now can find suspicious activity by food shoppers on their computer screens. In seconds, they can match the suspicious purchase with a person&#8217;s name, Social Security number and phone number.

&#8220;The chances of them getting caught has significantly increased,&#8221; said Air Force Maj. Resti Andin, the USFK chief customs officer.

It certainly is all right for anyone to buy baby food and for people to prefer hot dogs without bread. And checking out in the same lane with the same cashier more than once in a month could happen by chance, USFK officials acknowledge.

But these actions create a pattern that matches past criminal cases of black marketing, and investigations found that shoppers with such habits, in those cases, wanted to make money by passing along the baby food or hot dogs to Korean markets, Rogers and others said.

Each day, the computer program is updated with all purchases from all 12 commissaries in the country, Rogers said. The program also is designed to determine what is &#8220;normal&#8221; for each individual shopper based on that shopper&#8217;s past activity. Then it compares the individual&#8217;s record with the habits of everyone else. It&#8217;s all tracked after the cashier enters the shopper&#8217;s Social Security number.

Two weeks ago, Rogers pulled up an example. He gave the program a basic scenario: Find someone who might look a little suspicious based on all the October purchases made at the Yongsan commissary. Up popped a retired military member who is a senior citizen, is single with no dependents, and had bought 1,000 ounces of rice that month.

In early December, Rogers still was testing the program and beginning to train military investigators so they can build their own searches. They hope to adapt the technology to AAFES&#8217; system as well, though no timeframe has been set, he said.

And soon, maybe even within the next two years, computer programmers like Rogers hope to build software that can create the same sophisticated tracking system from factory to grocery cart to Korean outdoor markets in Seoul.

What are the limits?

At commissaries, shoppers are limited to monthly spending amounts based on their family size. To see the limits, and to look at your own grocery shopping record, go to USFK&#8217;s Personnel Imfornation Management System and click on &#8220;Ration Lookup.&#8221;

Liquor, wine, beer, furniture, electronic equipment and other nonperishable items come from the Army and Air Force Exchange Service stores. USFK policy limits purchases of liquor (defined as anything with 20 percent or more alcohol) to three units per month for a single person, five for a family. Beer sales are limited to two cases per day, or eight per month.

At AAFES stores, cashiers are told to take note if someone buys more than three of one item, according to a store official, though common sense also plays a role in screening for possible black marketers. Buying half a dozen envelopes won&#8217;t raise any eyebrows, but buying four bottles of wine will.

What should you do if you suspect black marketing?

Don&#8217;t confront the individual, officials advise. Instead, bring the person&#8217;s actions to the attention of a store worker or manager. Do your best to observe the basics: time of day, store location, description of person and his or her actions, even a car license plate number. Call USFK&#8217;s black market hot line at DSN 738-5118.