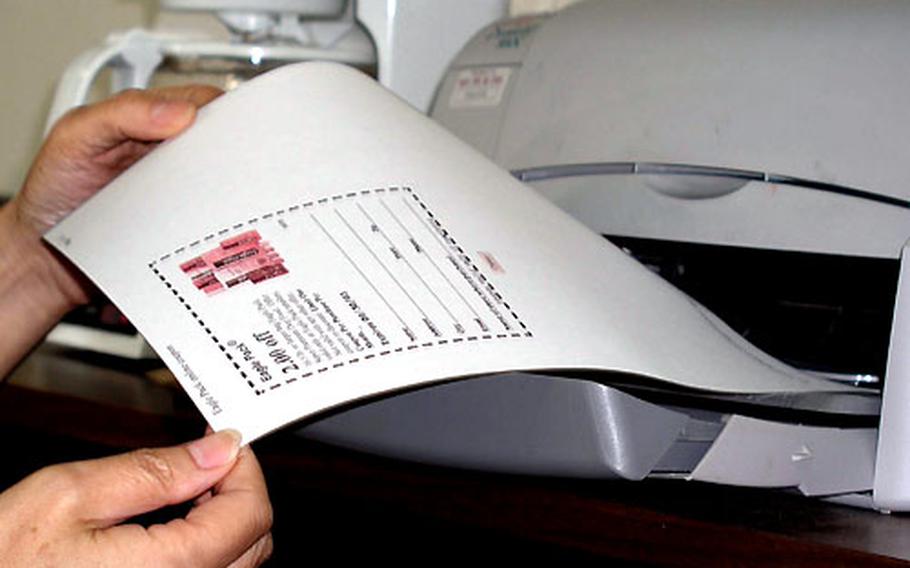 CAMP FOSTER, Okinawa &#8212; While it&#8217;s still OK to clip coupons from newspapers for goods at your local grocery, the Defense Commissary Agency is putting the kibosh on coupons downloaded from the Internet.

Following a policy adopted by many grocery chains in the United States, DECA has announced that commissaries no longer will accept &#8220;home printed&#8221; coupons.

Industry analysts estimate coupon fraud has cost the grocery industry millions of dollars, Vitkacs said &#8212; losses passed on to consumers in the form of higher prices.

&#8220;Most coupons are legitimate but home computers and Internet access have made it easy to alter legitimate coupons for fraudulent use,&#8221; he said. &#8220;This is an interim measure we&#8217;ve adopted immediately to protect our customers and industry partners.&#8221;

&#8220;Print-at-home&#8221; coupons present many security challenges, found a study by the Coupon Information Center, an industry group based in Alexandria, Va.

Print-at-home coupons, the center found, &#8220;are inherently more vulnerable to counterfeiting and manipulation.

&#8220;Print-at-home substantially lowers the costs and skill requirements needed to create passable counterfeits,&#8221; the study concluded. To show how easy it is, the center had a 14-year-old use readily available software to manipulate coupons offered over the Internet.

The fake Internet coupons have not been seen much in DECA stores in the Far East, said John Spaur, store administrator for the Camp Foster Commissary on Okinawa, &#8220;but in the States a lot of commercial grocery stores have been adversely impacted. ... We hate to inconvenience our customers but we have to do something to combat this.

Commissaries still accept coupons from other sources, Spaur said. &#8220;And don&#8217;t forget that they are good for six months longer than the expiration dates in our overseas stores,&#8221; he added.