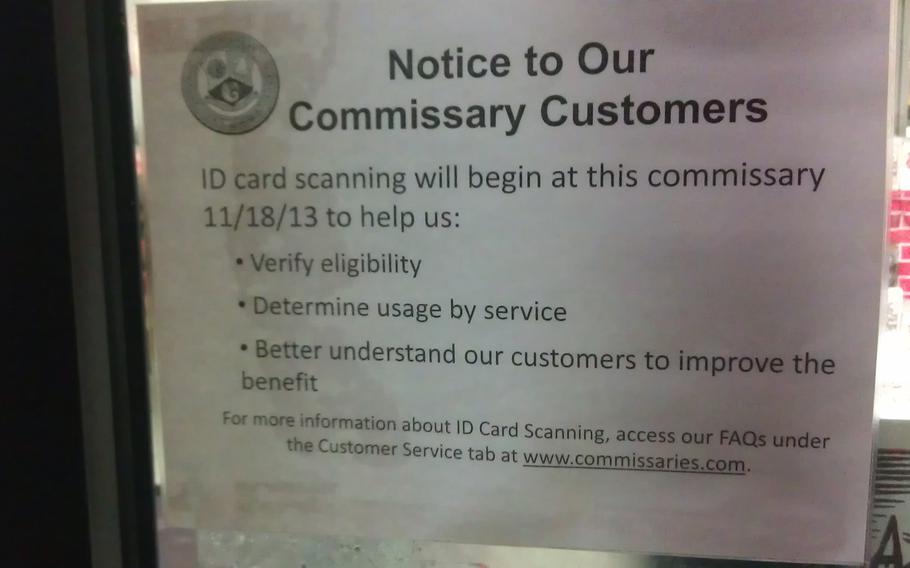 Buy Photo
A sign posted at the Wiesbaden Commissary in Germany notifies customers that the store will begin scanning ID cards on Nov. 18. The Defense Commissary Agency says the new policy will be in place at commissaries worldwide by mid-January. (Eric Brown/Stars and Stripes)

KAISERSLAUTERN, Germany — Commissaries on U.S. military bases worldwide plan to scan customer identification cards, which can then be used to collect household and other personal data from customers at checkout.

The Defense Commissary Agency says the new policy, set to launch in Europe later this month, is primarily intended to verify that customers are eligible for the commissary benefit, though it will also help the organization cross-reference the ID with other databases to capture valuable demographics about patron usage, DeCA officials said.

The system will log the card ID number, rank, military status, branch of service, age, household size and ZIP code of residence and duty station of each shopper. DeCA will not retain names, addresses or phone numbers, agency officials said.

That information “will eventually help the agency identify shopping needs and preferences — information that is essential in today’s retail business environment,” Richard Brink, DeCA spokesman, said in a written response to questions. The information will also allow more accurate reporting to the military services on commissary usage for budgeting purposes, according to DeCA officials.

Some commissary customers in Germany expressed concern about the new policy.

“I just wonder what information they are trying to get,” Ivy Griffin, a Kaiserslautern High School junior, said while shopping recently at the Vogelweh commissary. “I’m not particularly happy about it — it’s more of a hassle.”

Others are taking the change in stride.

“I’m certainly for it, if it’s keeps them in business,” said Jessica Amor, a nine-year veteran of commissary shopping and the spouse of a contractor.

DeCA officials said the information captured from an ID card’s barcode will be stored behind DeCA’s “firewall,” with strict security measures in place to minimize the risk of compromising customer privacy.

Positive identification of authorized commissary shoppers has always been a requirement enforced in commissary stores, a visual check typically done at the register.

Cashiers will still verify one’s ID card before scanning it. Those with expired cards won’t be allowed to finish their purchases, DeCA officials said. At self-check-out registers, attendants will visually verify ID cards before customers scan their own card.

The mandatory scanning won’t replace visual ID checks at some commissary entryways, either, since that’s an installation policy, Brink said.

Doorway checks aren’t intended to verify commissary privileges but as a matter of installation security, DeCA officials wrote on Facebook. The comment was in response to a post that questioned how mandatory ID scanning would stop authorized shoppers at Vicenza commissary from bringing their friends, neighbors and landlords into the store and shopping for them.

In 2010, commissaries at Ramstein and Sembach air bases, Wiesbaden and Vogelweh in Germany began requiring shoppers, when not in uniform, to show Defense Department identification at the door in addition to DeCA’s standard visual ID check at the cash register. Base officials said the stricter access rules were a security measure and intended to counter the perception that unauthorized shoppers were using the commissaries in the local area.

DeCA officials noted on Facebook that installation commanders may allow “visitors” to enter the commissary as long as they are accompanied by an authorized patron. Those visitors are not permitted to purchase items in the commissary.

The commissary at Fort Lee, Va., location of DeCA headquarters, started scanning ID cards on Oct. 22. The agencywide rollout was to begin Sunday at some stores and be completed by mid-January, according to a DeCA news release.

A sign posted in the Wiesbaden commissary says ID card scanning will begin there on Nov. 18. Store officials at Ramstein said they expected to use the system on the first day the renovated store opens on Friday.