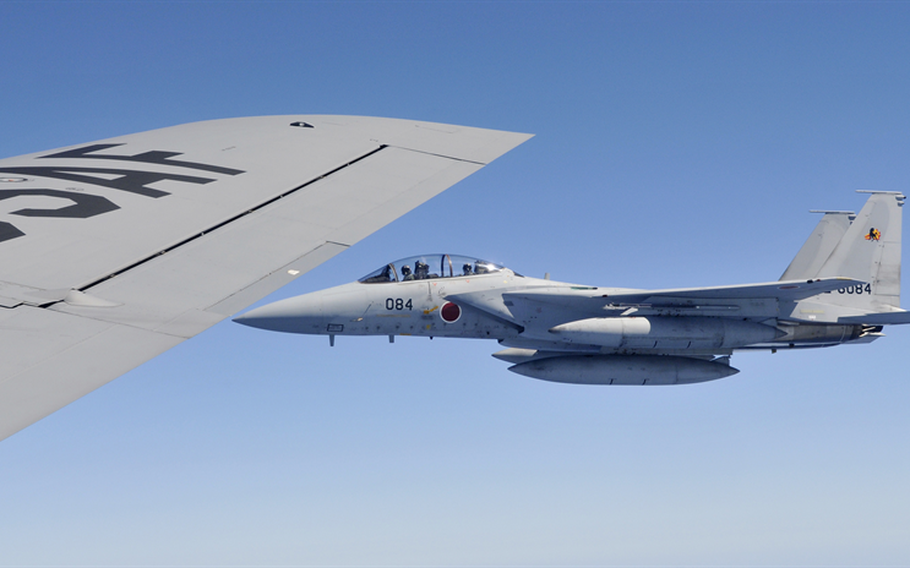 CAMP FOSTER, Okinawa — Several commercial flights were diverted to Kadena Air Base this week after a part fell from a Japan Air Self-Defense Force F-15, causing Naha Airport officials to shut down the runway.

The incident happened just before the runway was closed at 9:44 a.m. Wednesday, an airport official said. The F-15 was taking off with another jet, when an F-15 crew member saw something fall from the aircraft. A visual check of the aircraft while in the air revealed that a landing light cover had fallen onto the runway.

The JASDF contacted the airport immediately, which investigated and found broken glass on the runway, a JASDF Naha Air Base spokesman said.

The Okinawa Times reported Thursday morning that eight flights were canceled and Japan Transocean Airline flights from Ishigaki island to Naha and Okayama to Naha were delayed about four and a half hours.

The F-15 that dropped the landing light cover was still at Kadena as of Thursday morning.

“Once a checkup is completed and confirmed that it is fit to fly, it will return to Naha Air Base,” the spokesman said.

The incident’s cause is under investigation.

“Fortunately, we have mutual agreements with civil authorities here in Okinawa, and we were able to be good neighbors and provide a landing spot for those aircraft while Naha Airport worked to restore its runway to full operations.”