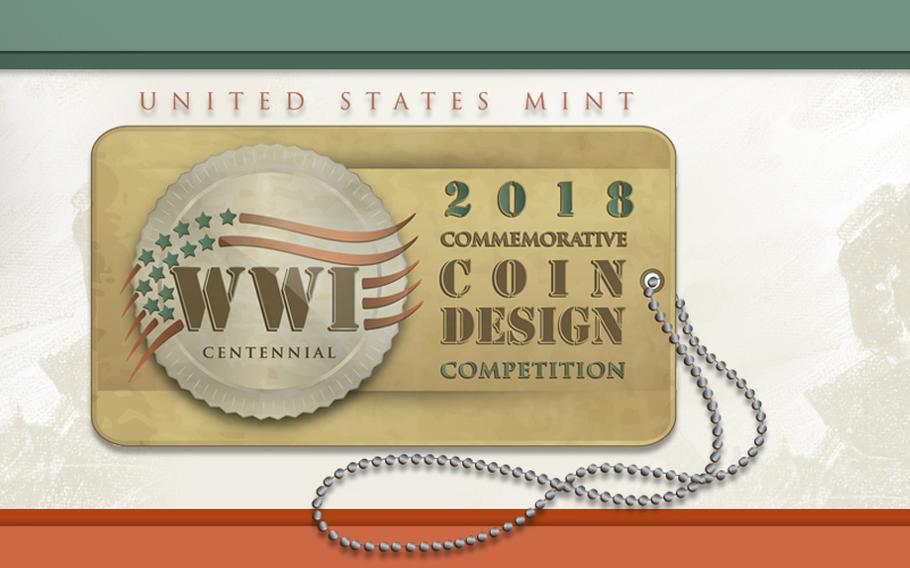 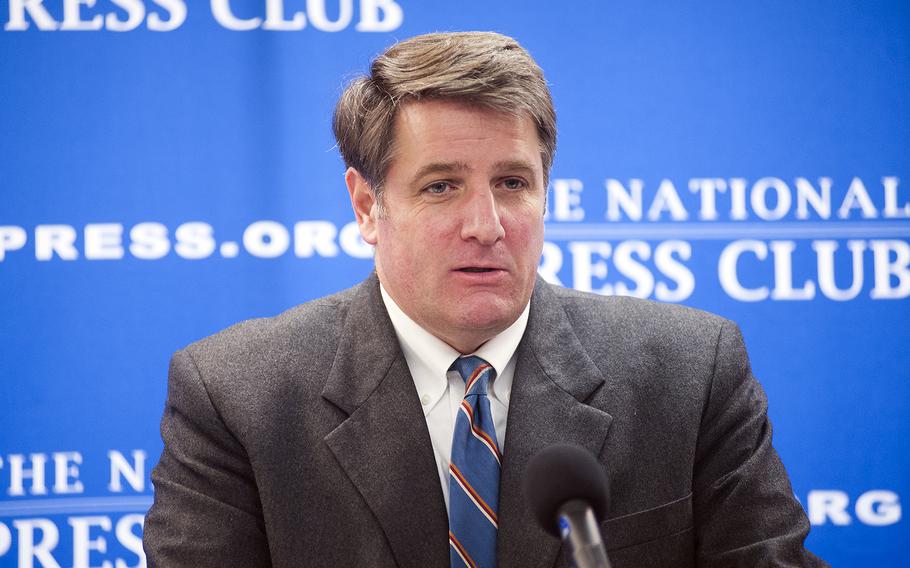 Edwin Fountain, vice chairman of the World War I Centennial Commission, speaks during a ceremony Wednesday, March 2, 2016, at the National Press Club in Washington, D.C. Fountain said the commission could net as much as $3 million dollars from the proceeds of a WWI commemorative coin that the U.S. Mint plans to issue in 2018. (Carlos Bongioanni/Stars and Stripes)

WASHINGTON — The U.S. Mint on Monday launched a design competition for a World War I-themed silver dollar that could bring the winner $10,000 and his or her initials engraved on the coin.

The two-phase contest is part of a larger effort to commemorate the war’s 100th anniversary, which includes the ongoing project to build a new National WWI Memorial in Washington, D.C. Last year, a design contest for the war memorial featured $25,000 prizes.

An April 28 deadline looms for the coin-design competition’s first phase. Contestants must upload three to five digital samples of their artwork to the U.S. Mint’s website. The site has instructions and a complete list of rules to enter the contest.

Members from the Coinage Advisory Committee and the Commission of Fine Arts will make up a jury that will take into account the “coinability” of each entry, said Heather Sabharwal, Mint spokeswoman. On or about May 31, the jury will select up to 20 artists who will compete in the second phase of the contest.

Each artist competing in the second phase will receive $1,000. Contestants must submit design sketches of the WWI theme and 3-D plaster models of their designs for the front and back of the coin. The artists will have 60 days from the time of notification to submit their work.

The coins require inscriptions and must include the following words or phrases:

Unites States of America E Pluribus Unum One Dollar (or) $1Designing an image that can capture an idea and symbolically convey the spirit or place and time of a historical event and make it all fit on a 1.5 inch diameter coin is “a tough endeavor,” said Sabharwal.

A winning design will be announced in January 2017.

The Mint, which produces all the coin currency in the United States, has an in-house team of artists who continually come up with designs for new commemorative coins.

In the bill that Congress passed and President Barack Obama signed in 2014 authorizing the Mint to produce the 2018 WWI commemorative coin, it stipulates the design process had to be open to the public, a rare occurrence at the Mint, said Sabharwal.

Though they could be used as currency, the WWI dollar coins, consisting of 90 percent silver and 10 percent copper, will be most likely kept as souvenirs by anyone who buys them, said Sabharwal. The purchase price will depend on the price of silver at the time the coins are produced in 2018. Similar coins produced in 2015 ranged from $48.95 to $51.95, depending on the finish.

Once the coins go on sale, proceeds are intended to help fund the new WWI memorial. After covering production and design-contest costs, all remaining revenues from a surcharge added to the price of the coin will go to a foundation designated by Congress to assist the WWI Centennial Commission with funding the memorial building project, now expected to cost $38 million.

Edwin Fountain, vice chairman of the commission, which launched last year’s WWI Memorial Design Competition, said the commemorative coins should bring in as much as $3 million if the Mint sells all the coins produced. The commission has raised roughly $6 million so far, Fountain said Wednesday during a National Press Club event in Washington.